Why Do Progressives Want the Boston Bomber to Live? 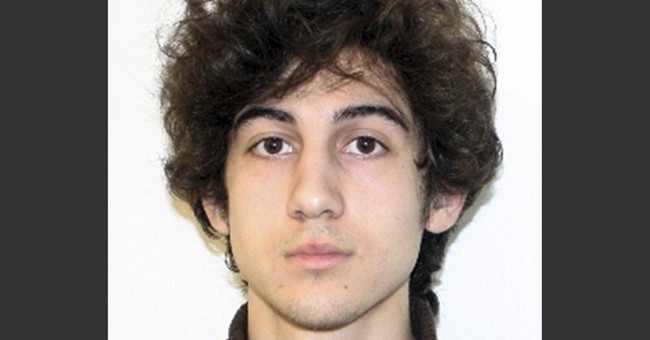 Federal prosecutors have announced they are seeking the death penalty for Boston marathon bomber Dzhokhar Tsarnaev. He and his brother, Tamerlan Tsarnaev, murdered three people and wounded more than 260. In addition, they shot a Boston police officer to death.

In keeping with what the citizens of progressive Massachusetts consider to be progressive values, the great majority of them oppose the death penalty for Tsarnaev. Only one out of three citizens supports his execution.

The Boston Globe reported that, when asked to explain the ACLU's opposition to executing Tsarnaev, "Carol Rose, executive director of the American Civil Liberties Union of Massachusetts, said that the union opposes the death penalty 'because it is discriminatory and arbitrary and inherently violates the constitutional ban against cruel and unusual punishment.'"

"Rose pointed out," the Globe added, "how the community rallied around the slogan, 'Boston Strong,' and said 'that means not letting terrorists or anyone else shake us from staying true to our values.'"

The Globe also reported that "opponents of the death penalty -- the Boston Bar Association declared its opposition to capital punishment earlier this month -- assert that it provides an 'illusion of ultimate punishment.' The group noted that death penalties, even when granted, are rarely carried out."

So, then, a man who placed a bomb next to an 8-year-old boy and blew him up along with other innocent people must not be executed because executing such people is "discriminatory and arbitrary," is "inherently cruel and unusual punishment," and because the death penalty provides only an "illusion of ultimate punishment."

How is executing Tsarnaev "discriminatory and arbitrary?" Against whom? Muslims? Males? Chechens? How is it "inherently cruel?"

Why isn't life in prison from the age of 19, which may include time in solitary confinement, inherently cruel?

And "inherently unusual" is logically almost impossible. Almost nothing humans do is inherently unusual. Whatever is unusual is so because cultures have decided that it is. Is eating insects unusual? In America it is. In parts of Africa it isn't. But it is certainly not inherently unusual. Likewise, capital punishment is only unusual in cultures that have declared it so. In fact it is much more accurate to say that keeping all murderers alive is unusual. It violates the most basic human instinct for fairness and justice.

All these arguments are so morally and intellectually weak that one must search elsewhere for the reason people believe that Dzhokhar Tsarnaev must be allowed to keep his life.

Where shall we search? Given that opposition to the death penalty is deemed a progressive position -- meaning a left-wing position -- one has to place this opposition within the general framework of leftism. Two major characteristics of leftism, as explained in my last column, are a sympathy with, if not full adherence to, pacifism, and an unwillingness to confront evil.

And it is true of individual evil. The left regards murderers, rapists, thieves and other violent criminals more as victims than as contemptible. Violent criminals do what they do because of poverty, racism and inequality, progressives argue. And these are not the only reasons violent criminals aren't to blame. Secular progressive thought also denies free will, viewing all our behavior as ultimately attributable to genes and environment.

Between blaming society and denying free will, progressives are more interested in understanding violent criminals than in punishing them. That explains why in Norway, for example, the maximum sentence for murder is 21 years in prison, and few Norwegian murderers spend more than 14 years behind bars.

In their hearts, most progressive opponents of capital punishment think Norway has it right -- including with regard to Dzhokhar Tsarnaev, whom they see as a young, naive victim of his older Islamist brother and his Islamist mother. On the other hand, the hearts of proponents of capital punishment focus on the photo of Tsarnaev placing a bomb next to an 8-year-old, and believe in that moment he forfeited his right to live. On this issue, the right and left not only have differing ideas, they have different hearts.