Roberts, Blankenhorn, and the Power of Liberal Intimidation 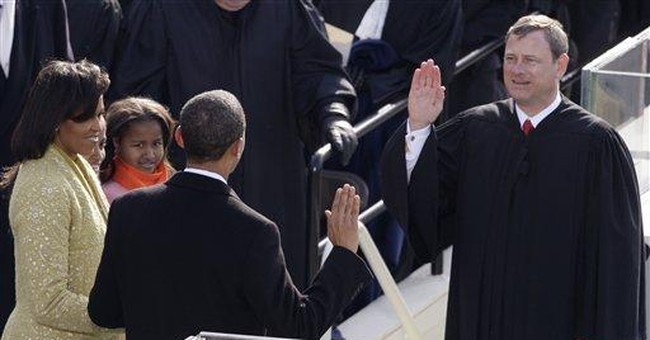 Trending
Given how many more Americans define themselves as conservative rather than as liberal, let alone than as left, how does one explain the success of left-wing policies?

One answer is the appeal of entitlements and a desire to be taken care of. It takes a strong-willed citizen to vote against receiving free benefits. But an even greater explanation is the saturation of Western society by left-wing hate directed at the right. The left's demonization, personal vilification, and mockery of its opponents have been the most powerful tools in the left-wing arsenal for a century.

Since Stalin labeled Leon Trotsky -- the man who was the father of Russian Bolshevism! -- a "fascist," the Left has labeled its ideological opponents evil. And when you control nearly all of the news media and schools, that labeling works.

The liberal media even succeeded in blaming the right wing for the assassination of President John F. Kennedy even though his assassin, Lee Harvey Oswald, was a pro-Soviet, pro-Castro communist. Similarly, just one day after a deranged man, Jared Loughner, attempted to kill Congresswoman Gabrielle Giffords and murdered six people in the process, The New York Times columnist Paul Krugman wrote that it was right-wing hate that had provoked Loughner: "It's the saturation of our political discourse -- and especially our airwaves -- with eliminationist rhetoric that lies behind the rising tide of violence. Where's that toxic rhetoric coming from? Let's not make a false pretense of balance: it's coming, overwhelmingly, from the right. . . ."

Krugman made it all up. But what matters to most of those who speak for the left is not truth. It is destroying the good name of its opponents. That is the modus operandi of the left.

Two examples in the last month bear testimony to its efficacy. One was the overwhelmingly likely motivation of Chief Justice John Roberts to declare the ObamaCare individual mandate constitutional despite his ruling that, as passed, the mandate was in fact unconstitutional.

The other was an op-ed column that David Blankenhorn, the prominent conservative advocate for marriage and against same-sex marriage, wrote for The New York Times.

David Blankenhorn has committed his professional life to fighting for the institution of marriage. And as recently as 2010, he testified on behalf of California Proposition 8, which, in 2008, amended the California Constitution to define marriage as the union of one man and one woman -- and which was immediately challenged in the courts, where liberal judges overturned it.

Blankenhorn was vilified throughout the liberal and gay media (which, in their invective against proponents of retaining the man-woman definition of marriage, are indistinguishable). As Mark Oppenheimer, editor of the "Beliefs" column in The New York Times wrote:

"During the trial [over the constitutionality of Proposition 8] and in the immediate aftermath, Blankenhorn became a national figure; he was . . . the butt of ridicule . . . . And now, he has decided to give up that fight.

"Blankenhorn would be ridiculed in The New York Times, and he would be . . . [ridiculed] in a play by an Oscar-winning screenwriter, starring a bevy of Hollywood stars."

"I had an old community organizing buddy who wrote a note to me after the trial and said, how does it feel to be America's most famous bigot? I used to think you were a good person. Now I know you're a bad person. How does it feel to know that your tombstone will read that you're just a bigot."

Two weeks ago, Blankenhorn wrote an op-ed piece for the New York Times in which he announced that he now supports same-sex marriage.

As reported by CBS News:

"Some of the conservatives, such as Justice Clarence Thomas, deliberately avoid news articles on the Court when issues are pending . . . . They've explained that they don't want to be influenced by outside opinion or feel pressure from outlets that are perceived as liberal.

"But Roberts pays attention to media coverage. As Chief Justice, he is keenly aware of his leadership role on the Court, and he also is sensitive to how the Court is perceived by the public. ["The public" means liberal media and academics.]

"There were countless news articles in May warning of damage to the Court -- and to Roberts' reputation -- if the Court were to strike down the mandate.

"Some even suggested that if Roberts struck down the mandate, it would prove he had been deceitful during his confirmation hearings, when he explained a philosophy of judicial restraint."

David Blankenhorn's change -- he has admitted he is tired of fighting the culture wars, and he has gone from being the object of New York Times derision to being a New York Times hero -- and Justice Roberts' change -- New York Times columnist Thomas Friedman wrote a column lauding Roberts for his "statesmanship" -- reassure progressives that ridicule, demonization, and character assassination work. With the stakes so high in the forthcoming election, expect it to only increase.