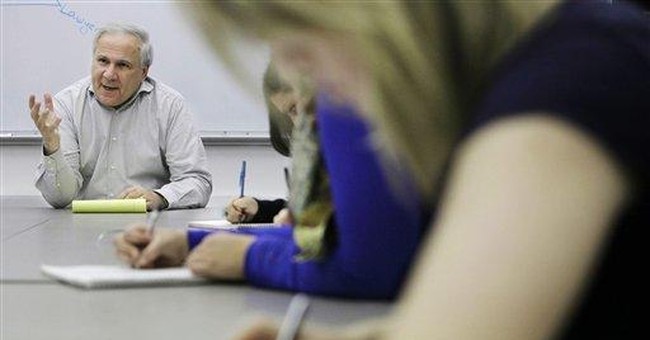 On Feb. 21, the 600 Northwestern University students enrolled in the popular Human Sexuality course taught by professor John Michael Bailey were told that if they wished to stay after class -- it was clearly made optional -- they would see a live demonstration of female ejaculation, the subject of that day's class. A naked young woman (not a student) would demonstrate a "f---saw" and come to orgasm in front of the students. About 120 students stayed.

When word came out about this contribution to young people's understanding of life, the university defended it. Its official spokesman, Al Cubbage, released this statement:

"Northwestern University faculty members engage in teaching and research on a wide variety of topics, some of them controversial and at the leading edge of their respective disciplines. The university supports the efforts of its faculty to further the advancement of knowledge."

We will return to that statement in a moment.

But first, here are excerpts from the longer statement released by Bailey on March 1, after the story had begun to be national news:

"On the afternoon of February 21st Ken MB and colleagues arrived while I was finishing my lecture, on sexual arousal. I was talking about the female g-spot and the phenomenon of female ejaculation, both of which are scientifically controversial. I finished the lecture and invited the guests onstage. On the way, Ken asked me whether it would be ok if one of the women with him demonstrated female ejaculation using equipment they had brought with them. ... My decision to say 'yes' reflected my inability to come up with a legitimate reason why students should not be able to watch such a demonstration. ... The demonstration, which included a woman who enjoyed providing a sexually explicit demonstration using a machine, surely counts as kinky, and hence as relevant. ... I did not wish, and I do not wish, to surrender to sex negativity and fear. ...

"While I watched, I experienced some apprehension. None of this apprehension had to do with the possibility of harm to any observer, and none of it had to do with a lack of educational value. ... Rather, I was worried that there could be repercussions that would threaten the valuable speaker series that I have built over the years. ...

"Do I have any regrets? I certainly have no regrets concerning Northwestern students, who have demonstrated that they are open-minded grown ups rather than fragile children."

First, Cubbage's statement must be deemed one of the great statements summarizing the state of American university education. The University of Chicago just released a devastating report on American universities, the gist of which is that most American students learn little or even nothing during their first two years at college.

In the 1960s and '70s, university education was trashed. Required courses were dropped, as 19-year-old "grown ups" were told that they would now decide what they would study. One could henceforth attend most American universities never having read a word of Shakespeare or one verse of the Bible, never having taken a course on Western civilization or American history, never having heard a symphony or, for that matter, never having experienced anything uplifting or elevating.

Whatever was previously deemed great -- as in great men, great literature, great art -- was deconstructed to mean nothing more than some ethnocentric, phallic-centric, culturally biased nonsense. Too many DWEM -- Dead White European Males -- had been studied before. Now students would study Latina lesbian poets.

In Bailey's class and Mr. Cubbage's statement, we have reached the logical culmination of the '60s and '70s. Instead of studying Dead White European Males, students get to study a young white living female ejaculating with a f---saw.

Second, the complete secularization of everything -- from ethics to human sexuality -- has also reached its logical culmination. For four years, the American college student is taught that human beings are animals. The notion that humans are not only animals, but also creatures created in the image of God and therefore possessors of ineffable sanctity, is dead at our institutions of higher learning. Actually, worse than dead -- laughed at.

And since we are only animals, why shouldn't students have a woman come to orgasm in front of a hundred students? Except for the possible titillation, the exhibition is no different than watching a female baboon having sex.

By Northwestern's logic, a biology class studying the excretory system would watch a man or woman relieve themselves in front of a hundred students. I cannot think of a single argument the man-is-an-animal crowd could offer against it.

So, parents, just know that by and large that is the message your son or daughter gets at almost any American university for your $50,000 per year (Northwestern's tuition plus expenses). Most colleges don't have public orgasm sessions. But I'll bet almost none, aside from garnering bad publicity, can think of a single good reason not to.