Dennis Avery
|
Posted: Jul 13, 2017 12:45 AM
Share   Tweet
The opinions expressed by columnists are their own and do not necessarily represent the views of Townhall.com. 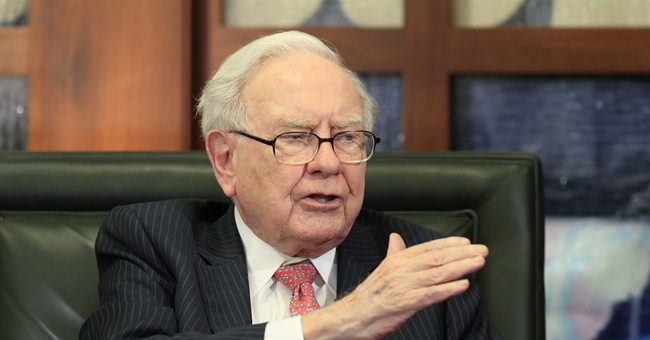 Warren Buffett is offering $9 billion to buy Texas-based Oncor, the largest power company in Texas (Wall Street Journal, July 12, 2017).  Why does Buffett want it? Because he sees fossil fuels as radically underpriced assets around the world. Remember that his Burlington Northern railroad, purchased mostly in 2010, has since doubled in value, hauling cargoes of Wyoming coal for export and Dakota shale oil and gas west for refining. Famous for taking the long view, he sees fossil fuels as a far bigger part of his Berkshire-Hathaway empire’s future.

Buffett first and foremost sees the horrendous costs and erratic nature of wind and solar. That makes them non-competitive in the long-term, despite their current (but fading) subsidies. With Trump in the White House for the next four years, Buffett won’t have to worry about the state of Texas forcing him to buy subsidized wind or solar.

Even better for Buffett, Trump is taking the U.S. out of the Paris Accord, and it’s extremely unlikely that Europe will be able to paste together another global agreement. Too many countries—including the U.S., the U.K., Japan, Eastern Europe and Australia — learned firsthand about the desperate danger renewables represent to economic growth. Turkey also announced it won’t sign a new treaty. Without U.S. funding, the wealth transfers promised for Paris are unlikely.

America’s shale gas is so highly cost-effective that Buffett is also watching a huge flood of investment on new chemical plants to use it. The first plants, being built by $185 billion worth of investment capital, are already beginning to produce. The chemical expansion alone is likely to produce half a million new U.S. jobs, and will importantly boost our exports worldwide. The gas will also help U.S. steel, aluminum, cement, fertilizer, and other high-energy industries.

Buffett’s railroads and his other economic assets will all benefit. He will even receive some Oncor renewable energy credits to cash in.

Another of Buffett’s recent big investments is in Chinese oil, and more than 1,600 coal-fired power plants are under construction and/or planned globally. Third World countries desperately want more electricity for homes and industries, and they have the coal. China is also helping finance hundreds of the new coal-fired power plants in potential Third World ally countries.

Even Europe is burning as much coal as it ever did, not least because still-winds and cloudy skies force the EU countries to back their renewables 80–90 percent with fossil fuels, in “spinning reserve” and burning fossil fuels.

All-renewable energy has never been possible for a modern economy. The “Greenest” jurisdiction in Australia is suffering recent blackouts since it tore down its last coal-fired power plant. To stave off future blackouts, the South Australian government is rushing construction of a new government-owned gas-fired power plant — which will be used only in emergencies. Wish-dreams die hard

Meanwhile, voters around the world are asking why we’re subsidizing costly, erratic renewables when the earth has had no measurable warming in the past 19 years. Now astrophysicists are telling us an even-colder 60 years of weather is impending, due to a solar sunspot minimum. A recent re-analysis of sunspot records reveals such cold sunspot minimums happen every 200 years or so, and the cold Dalton Minimum ended about 1830. Sixty years is plenty of time for Buffett’s empire to profit from carrying and burning abundant fossil fuels. Moreover, 60 years from now, Japan’s super-clean coal-fired power technology can be in widespread use.

Is CO2 even the earth’s thermostat? That is now open to major question. Hundreds of peer-reviewed studies say that CO2 is a minor factor in the earth’s persistent warming over the past 300 years. Many of these studies have been published during the past two years, as the earth failed to warm and scientists kept asking why.

The most important of the new research comes from CERN, the world’s top particle physics laboratory. Its CLOUD experiment found clouds triggered by solar-varied cosmic rays have been the “mystery factor” in earth’s past abrupt climate changes.

Angela Merkel, who grew up in East Germany’s “planned disaster” economy, is still closing German nuclear plants, citing the “Fukushima disaster” — when no radiation deaths occurred. As a result, Germany’s electric rates are three times as high as the U.S. and German investors are bringing billions of those investment dollars to our shores. Eastern Europe’s economies are forging ahead using coal the EU can’t force them to renounce. (The U.K. voted to leave the EU, in large part, over the EU’s renewable energy demands.)

Pruitt and Energy Secretary Rick Perry are now moving toward a “red-team” review of the “scientific consensus” that claims 97 percent of scientists agree too much CO2 threatens the earth. An honest review will prove that claim highly inaccurate, clearing the way to ditch all of Obama's renewable energy regulations.

H. L. Mencken, the late columnist of the Baltimore Sun, famously wrote that “The whole aim of practical politics is to keep the populace alarmed (and thus clamorous to be led to safety) by menacing them with an endless series of hobgoblins, all of them imaginary.”

This hobgoblin is dying. Warren Buffett sees that clearly — and profitably. When will the wish-dreamers catch up with reality?