Demian Brady
|
Posted: Feb 03, 2021 12:01 AM
Share   Tweet
The opinions expressed by columnists are their own and do not necessarily represent the views of Townhall.com. 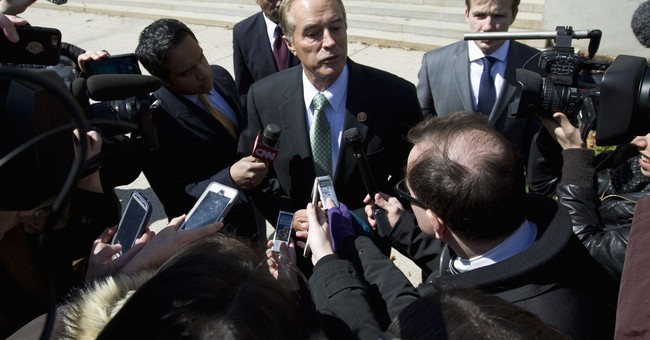 President Trump had pledged to drain the swamp, but late term pardons may have thrown a lifeline to five certified swamp dwellers. The president has now pardoned former Representatives Randy “Duke” Cunningham, Chris Collins, Duncan Hunter Jr., Rick Renzi and Steve Stockman, all of whom were convicted of corruption-related crimes. In doing so, he has ensured that two of them will be eligible for a taxpayer-funded pension despite reforms intended to cut off such payments to convicted former members.

Trump’s pardons will put taxpayers on the hook for nearly $1.3 million in payments to members that abused their offices. This is on top of an estimated $450,000 in pension payments that have flowed to two other former members, Chaka Fattah and Corrine Brown, who are currently in the custody of the Bureau of Prisons and have exploited a loophole in the law to keep receiving taxpayer dollars.

Since 1946, Members of Congress have been eligible for a generous federal pension plan, paying two or three times more than pensions offered to similarly-salaried workers in the private sector. While it seems like common sense that any politician guilty of corruption should forfeit any right to a taxpayer-funded pension, it wasn’t until 2007 that any such restriction was enacted after outrage over several high profile convictions, including the freshly-pardoned Cunningham who solicited bribes on Congressional stationery in office.

Unfortunately, Cunningham, Renzi (whose convictions include extortion and bribery), and Stockman (money laundering and misuse of funds) remained eligible for their congressional pensions because they were elected before enactment of the law, which could not be applied retroactively.

It looked like Chris Collins was set to be the first member to forfeit his pension under these laws after he pleaded guilty to insider trading and was sentenced to 26 months in prison. However, Trump’s pardon will restore Collins’ pension. A full pardon exempts a person from the consequences of a crime, and one of the punishments for Collins’ crimes had been the statutory loss of his congressional pension. Based on his length of service and estimated additional life expectancy, he stands to collect $215,000, assuming he took advantage of full benefits while in Congress.

Meanwhile, Duncan Hunter Jr. was indicted in 2018 on 60 charges including wire fraud, falsifying records, conspiracy, and campaign finance violation. However, he pleaded guilty to two lesser charges for crimes that were not included in the pension reform law’s list that could lead to pension forfeit, so it was uncertain whether he would have been able to collect when he becomes eligible in 2038. Trump’s pardon removes any doubt. Hunter could stand to collect $1.08 million over his expected lifespan.

Unfortunately, under the current system, taxpayers may never even learn whether any member loses their pension under the pair of reform laws. The Office of Personnel Management (OPM) determines the eligibility for the federal pension when an individual applies, and the agency, citing privacy restrictions, currently will not provide any public comment on the status of applicants and enrollees.

The prospect of taxpayer dollars flowing to politicians convicted of abusing their office is appalling, to say the least. Congress needs to follow up on previously introduced bipartisan legislation that would close the pension loophole for felons. Moreover, taxpayers deserve to know if their dollars are padding the pensions of corrupt swampy congressmen.

The rules package in the House of Representatives enacted for the new 117th Congress included a change barring convicted representatives from accessing the floor, a privilege generally provided to former members. If Congress is willing to cut off access to schmoozing privileges for corrupt former colleagues, it should also be willing to cut off access to taxpayer dollars in retirement.