Demian Brady
|
Posted: Jan 07, 2019 12:47 PM
Share   Tweet
The opinions expressed by columnists are their own and do not necessarily represent the views of Townhall.com. 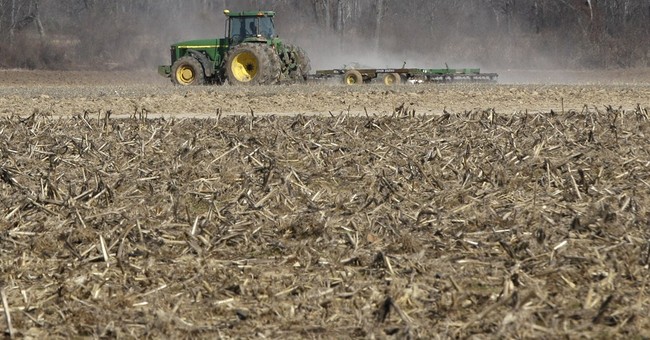 Taxpayers’ heads were left spinning after the rushed passage of the farm bill. The whirlwind process left little time for comprehending, much less debating, the details of the package and its potential impact on the budget. Lawmakers did not even have comprehensive information on the cost of the bill because the rushed process meant that the Congressional Budget Office (CBO) was not able to provide a full evaluation of the spending provisions in the legislation.

The reason for this bizarre rush? The total pot of money to spend on the farm bill drops by $2.8 billion when the clock strikes midnight January 1, 2019. This drop in the “baseline” for spending reflects the fact that some 39 programs have authorizations that expire at the end of this calendar year. In order to squeeze every dime out of taxpayers possible, Congress rushed to pass a bill in 2018 to take advantage of $2.8 billion more breathing room.

Early each year CBO develops a current-law baseline for farm programs based on a forecast of the economy and the supply and demand for the commodities. Farm bill legislation gets scored against this projection of spending under the law as currently written.

Before Congress started work on the current reauthorization, they effectively inflated the baseline: a law enacted last February included disaster relief for dairy and cotton producers, ensuring that these commodities would be “baked in” to the baseline and would not have to compete for scarce resources.

Because Congress failed to reauthorize the farm bill earlier this year, many of the provisions of the previous 2014 farm bill expired this year. The budgetary impact of expiration of the farm bill varies, depending on how each program is funded. Discretionary spending programs, and mandatory programs such as the Supplemental Nutrition Assistance Program (SNAP) funded through appropriations, would not be affected. Mandatory commodity support programs would revert back to permanent law dating back as far as 1938, ending subsidies for many commodities added in the intervening decades. The remaining commodity supports would be based on an outdated index, leading to massive distortion of prices and billions in higher spending. Congress provided for short-term extensions in each previous instance when farm authorizations expired.

However, many mandatory programs would be unable to carry out any new operations once their authorizations run out. The Congressional Research Service listed 39 programs funded at a total of $2.8 billion that would not have authorization after 2018.

In order to jam a bill through, the Senate ended up voting on the farm bill conference report a week earlier than previously expected. This rushed process left senators with little time to consider its fiscal impact as it proceeded to vote on legislation. When CBO did finally release its analysis – just before the Senate started voting – it estimated that the bill would cost $428.3 billion over five years and $867.3 billion over the next decade. However, the total cost of the bill was unknown: CBO did not have time to estimate additional discretionary spending in the agreement.

Adding insult to injury for taxpayers, the budget math for farm bills is typically precarious. CBO’s long-term cost estimates miss the mark due to market fluctuations and the unpredictability of natural disasters such as droughts or floods. By first inflating the farm bill’s baseline early in the year and later rushing to pass it before its baseline would shrink in 2019, it is apparent that Members subverted the original purpose of the budget analysis performed by CBO. Instead of using it as a guideline to help them budget responsibly, Congress gamed the process in order to fatten up checks to agribusinesses as much as possible.

While much work needs to be done to improve CBO, the farm bill is proof that Congress and its perverted policymaking process needs just as much fixing.