Demian Brady
|
Posted: Apr 27, 2018 12:01 AM
Share   Tweet
The opinions expressed by columnists are their own and do not necessarily represent the views of Townhall.com. 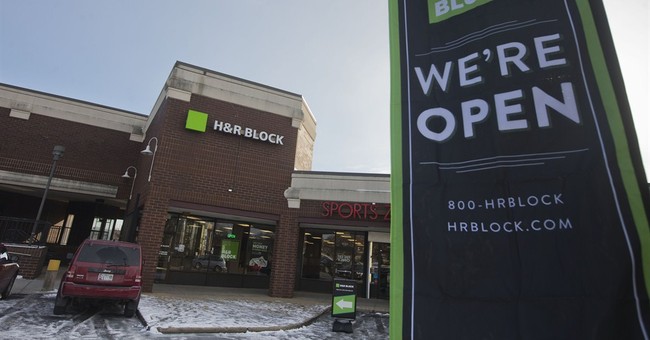 Thanks to passage of the Tax Cuts and Jobs Act (TCJA), Tax Day 2018 marks the last time Americans will have to file under the old tax code. And it absolutely needed an overhaul: On its way out, it will impose a compliance burden totaling 8.1 billion hours. The total amount of time it takes to make sense of the laws and file tax forms is equivalent to labor costs of more than $272 billion. Add to the that the out-of-pocket expenses related to filing, and total amount lost to tax compliance -- $304 billion -- is greater than the combined revenues of Apple and Google, more than the revenues of J.P. Morgan Chase, Wells Fargo, and Bank of America combined.

While headlines like “Tax-filing migraines are not going away” from the Associated Press try to throw cold water on the positive effects of tax reform, last year’s legislation will significantly reduce compliance burdens for millions of filers. Here are the numbers that set the record straight.

A key component of the TCJA will nearly double the standard deduction from $6,350 to $12,000 for individuals and from $12,700 to $24,000 for married couples starting in the next tax year. The Congressional Budget Office estimates that the number of filers who itemize will drop by 31 million. As these filers are able to switch from the standard 1040 form to the simpler 1040A, IRS paperwork burden data shows that they would save an average of eight hours and $180 in costs. In total, this will save 248 million hours in compliance burdens, which when added to lower out-of-pocket costs amounts to a savings of $14 billion.

Another point worth noting is that fewer people will owe income taxes because of the changes in the TCJA. David Splinter, an economist at the Joint Committee on Taxation, estimates that those who won’t owe income taxes next year will rise by 2.5 percent, which means that almost 4 million additional filers won’t owe anything at all. Splinter also found that the reformed tax code will become more progressive, with the top earners taking on an even larger share of the total tax burden.

One of the more onerous features of the current tax code is the Alternative Minimum Tax, which requires certain filers to calculate their taxes a second time using a different set of rules with fewer exemptions and deductions. The TCJA temporarily raises the level of income that requires individuals to go through the hoops of figuring out their taxes twice, effectively reducing the number of taxpayers impacted by the AMT by over 4.6 million. The last reported compliance stat on the AMT was in 2004, when it took an average of 3 hours and 53 minutes to comply with the rules - meaning that approximately another 18 million hours in compliance burdens will be erased.

Dismissing claims that forms will be simplified, the Associated Press concluded that there is “no sign that the IRS is planning new filing forms, card-size or otherwise, for the 2018 tax year.” Tax forms won’t shrink to the size of postcards as was promised by some, but the Tax Policy Center figures that up to six lines in the current standard 1040 Form will no longer be necessary, and that one new line would likely be added. The IRS has already been working to revise its forms and publications to incorporate the changes enacted in the TCJA. A new Form W-4 was issued in February to reflect withholding changes. Other forms will be revised and updated as the next tax season approaches. It is also expected that there will be a brand-new form, schedule, or worksheet created for self-employed taxpayers, partners, and S-corporation shareholders to calculate qualified business income deductions.

The TCJA didn’t fix all the painful complexity burdens in the tax code. There’s still a lot more work to do - and some legislators on Capitol Hill are already working to reform the IRS and make further changes in the tax code that will help filers. But thanks to TCJA, starting this year, there will be tens of millions fewer headaches.