Debra J. Saunders
|
Posted: Aug 28, 2016 12:01 AM
Share   Tweet
The opinions expressed by columnists are their own and do not necessarily represent the views of Townhall.com. 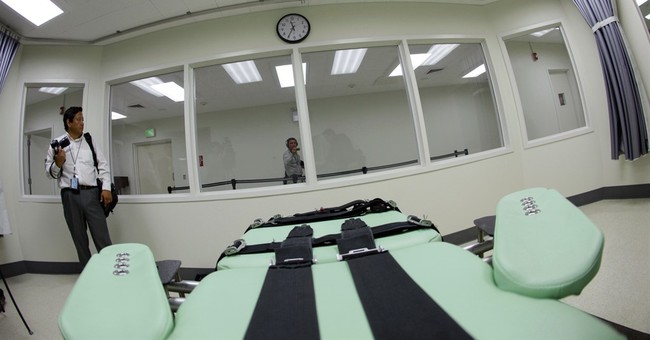 That's a cheeky stand, coming from the corner that has been throwing monkey wrenches into the criminal justice system to subvert death penalty law. Over the years, appellate attorneys have introduced endless time-sucking, frivolous appeals that have jammed the courts, largely on technical grounds that have nothing to do with guilt or innocence, e.g., the trial lawyer wasn't top-drawer; the defendant's parents were abusive; lethal injection may not be painless.

In 2006, lawyers argued that convicted torturer-murderer Michael Morales might feel pain in his last moments because of the state's three-drug lethal injection protocol. A federal judge granted their appeal and effectively froze the capital punishment pipeline for a decade.

California Gov. Jerry Brown had pledged to implement the death penalty, even though he personally opposes it, yet his corrections department was happy to sit back and let the law not work for years. In exasperation, the tough-on-crime Criminal Justice Legal Foundation filed a lawsuit on behalf of the families of murder victims of two death row inmates to prod the state into developing a drug protocol that should pass muster with the U.S. Supreme Court. California Attorney General Kamala Harris, who also said she would uphold California's law despite her personal objections, tried to block the suit on the dubious grounds that the victims' families "lack standing." She failed. The families won. Sacramento finally devised a one-drug protocol, which should go into effect after a vetting period expected to end soon.

So now, just as the obstructionists are about to run out of string, they have put a measure on the November ballot to end California's death penalty.

Anti-death penalty activist Matt Cherry of Death Penalty Focus told the San Francisco Chronicle editorial board that capital punishment "has failed in California." Since 1992, he added, "just 13 people have been executed," which he noted constitutes about 1 percent of the 930 individuals sentenced to death since 1978. It's like an extorting mobster telling an honest businessman that it no longer pays to work hard and follow the rules: "You might as well just toss me the keys to the shop and save yourself some heartache."

In their ballot argument, Prop 62 supporters warn that when executions resume, California risks executing an innocent person -- someone like Carlos DeLuna, who was executed in 1989 before an "independent investigation later proved his innocence." Problem: Texas executed DeLuna. Prop 62's backers can't name an exonerated individual from California's post-1978 death row because there aren't any.

In 2012, I asked Gov. Brown whether he had considered appointing a panel to recommend death row inmates deserving of a commutation. Brown personally remains a death penalty opponent, so his answer is instructive: "As attorney general, I think the representation was good. I think people have gotten exquisite due process in the state of California. It goes on for 20 or 25 years, and to think that they've missed anything like they have in some other states, I have not seen any evidence of it. None. I know people say, 'Oh, there have been all these innocent people.' Well, I have not seen one name on death row that's been told to me."

At a different editorial board meeting, former San Quentin State Prison Warden Jeanne Woodford, Ana Zamora of Death Penalty Focus and Berkeley law professor Elisabeth Semel vigorously defended all of the high jinks played by anti-death penalty lawyers. They oppose both the death penalty and Prop 66, which is supposed to streamline executions.

Why does it take a year to process an appeal based on a convicted killer's childhood? Why doesn't the Habeas Corpus Resource Center focus on worthy appeals and stop jamming up the courts with frivolous paper -- and then complain about court backlogs? Why have opponents gone after the state for getting lethal injection drugs from compounding pharmacies or other states, after opponents made it impossible to secure drugs from once-legal sources? The answer to everything: Defense attorneys have to do it because "it's the law."

Well, so is the death penalty.

If California voters should decide to repeal capital punishment, do not believe for one minute they won't use every dirty trick to undermine life without parole. And they'll tell you they have to because "it's the law."