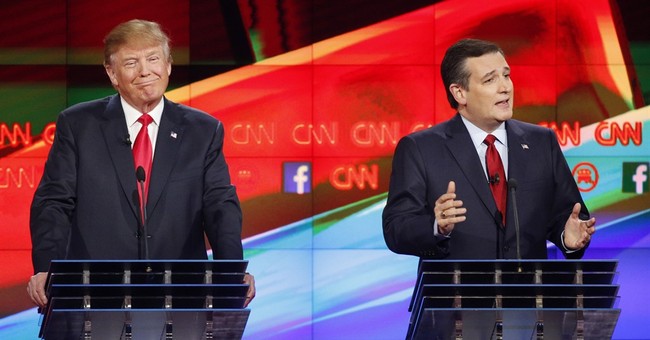 Why does Donald Trump repeat talking points that he knows are untrue? During Tuesday night's debate, The Donald asserted that before 9/11, terrorists put their "friends, family, girlfriends" into planes, and "they were sent back -- for the most part to Saudi Arabia. They knew what was going on. They went home, and they wanted to watch their boyfriends on television."

Trump made similar claims -- but that the 9/11 terrorists sent back their wives -- earlier this month. Washington Post fact-checker Glenn Kessler shredded the claim. Only two of the terrorists were married, Kessler reported, and neither wife had been in the United States. The German girlfriend of one terrorist visited America, but she flew home months before the attack, of which she was unaware.

It speaks volumes about Trump's character (or lack thereof) that rather than drop the bogus 9/11 claim, he edits it in a way that corrects one error -- from wives to girlfriends -- but remains totally false and utterly scurrilous. What does he get out of saying things that are patently untrue? It makes you wonder whether his goal is to lower the bar so that the next time he belches out a whopper, his groupies will just shrug and say it's Trump being Trump. As if that's a good thing.

What he gets: If Trump backs out of his pledge not to run as a third-party candidate, then he'll have cover because he can claim that only a chump would believe he meant what he said.

New Jersey Gov. Chris Christie stuck to a false narrative with introductory remarks on the one-day closing of Los Angeles schools. "Think about the effect that that's going to have on those children when they go back to school tomorrow, wondering, filled with anxiety about whether they're really going to be safe," quoth Christie. "Think about the mothers who will take those children tomorrow morning to the bus stop wondering whether their children will arrive back on that bus safe and sound."

He knew it was false; by the time the Las Vegas prime-time TV debate began, Los Angeles Mayor Eric Garcetti had disclosed that the threat made on the schools was a hoax. It was a hoax that disabled Los Angeles but did not gull cooler heads in New York.

I like Christie. I see his appeal as a governor during scary times and as a former federal prosecutor who put away terrorists plotting on American soil. Still, it bothers me that the Jersey guy doesn't know when not to play the terrorism card. He should have known better than to address the Los Angeles scare as anything but a prank. He was giving too much credence to a false alarm. It's counterproductive.

Former Florida Gov. Jeb Bush was the only candidate to get under Trump's skin. Bush asked the billionaire how he expected to handle Vladimir Putin if he couldn't keep his cool about his CNN coverage. Trump -- inaccurately, of course -- threw back his poll numbers at Bush. "I'm at 42 (percent), and you're at 3," Trump sputtered. For the record, the RealClearPolitics average shows Trump at 33 percent and Bush at 4 percent. If Trump had not ruled out a third-party run if he is not the GOP candidate, that little outburst would have led debate news.