Who Even Wants to Be House Speaker? 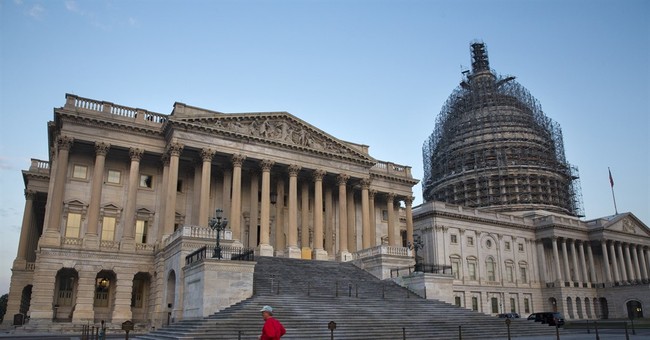 Trending
Rep. Tom McClintock of California is about as conservative a Republican as you can find in Congress. As a state legislator in Sacramento, he was a well-known budget hawk. In the House, writes The Almanac of American Politics, he has been "a faithful conservative vote, though an occasionally nettlesome one to GOP leaders seeking to limit internal dissent." Former California Gov. Pete Wilson has such marked antipathy for McClintock that he took the unusual step of supporting a GOP challenger in McClintock's latest re-election bid.

It says everything about how dysfunctional the GOP House has become that such a solo flier as McClintock has taken a stand against the GOP insurgency that torpedoed House Majority Leader Kevin McCarthy's bid to become speaker of the House. I talked to McClintock on Thursday after McCarthy bowed out of the race. He was "stunned by the announcement and very disappointed."

Though McClintock says he agrees with the group's fiscally conservative principles, he also believes that its tactics have sabotaged the conservative cause. In February, the House Freedom Caucus pushed to defund President Barack Obama's immigration policies -- and failed. In May, the caucusers tried to kill the free trade bill. Failed again. Worse, the caucus forced the House leadership to abandon legally binding action against Obama's "disastrous Iran nuclear agreement" in favor of a symbolic and legally meaningless vote.

"A common theme through each of these incidents is a willingness -- indeed, an eagerness -- to strip the House Republican majority of its ability to set the House agenda," McClintock wrote, saying the behavior has unwittingly become House Minority Leader Nancy Pelosi's "tactical ally."

McClintock believes that representatives can and should vote their conscience on specific legislation. But when it comes to the party, no Republican should sabotage the leadership. "We're now in a situation where at least 29 Republicans have taken the position that if they don't like the Republican nominee for speaker, they will combine with the Democrats against that nominee," he told me. It's a dangerous game because Democrats could end up cutting deals with 29 centrist Republicans who might care to, say, eliminate the mandated spending caps. Open this door, it can swing either way.

McClintock saw a prequel to the House brawl in California's 1995 speakership wars. One Republican -- actually three in a row -- cut deals with the Democratic minority to thwart the GOP majority's ability to control the state Assembly. In the next term, Democrats regained the majority.

The Republicans have their largest majority since 1928 -- 247 seats -- until you subtract Republicans who are willing to sacrifice unity for feckless gestures. The simple fact is that the House Freedom Caucus does not have the votes to put one of its own at the helm. It can only stop other Republicans from winning 218 votes.

Rep. Devin Nunes of California, a McCarthy ally, has spent years working on serious policy, only to see conservative initiatives drowned out by the chaos. "They've hijacked the whole conservative movement," he lamented. Indeed, he is so fed up with this GOP minority's trying to control the party that he suggested kicking out Republicans who won't support the majority's choice. "They don't understand what power is," Nunes told me. Their idea of winning is "no speaker" or a "weak speaker."

After the outgoing House speaker, John Boehner, announced his resignation, his former lieutenant, Eric Cantor, took on Boehner's detractors in The New York Times. Cantor often hears, he wrote, the lament of the GOP base that the party needs to fight: "On this I agree. It is imperative that we fight for what we believe in. But we should fight smartly. I have never heard of a football team that won by throwing only Hail Mary passes, yet that is what is being demanded of Republican leaders today."