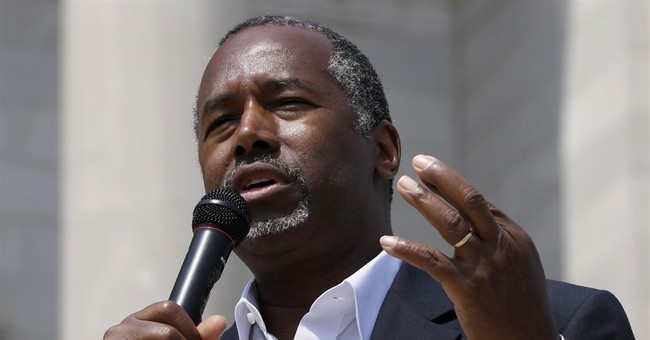 Trending
Donald Trump may have cost Jeb Bush and Scott Walker front-runner status in national polls on the Republican presidential primary, but he has been a veritable fairy godfather to Ben Carson. Recent polling put the retired neurosurgeon in second place, right behind The Donald. The chattering class says GOP voters are looking for a nominee who doesn't talk like a politician. Trump fits the bill because he's not afraid to toot his own horn and he is so very politically incorrect. Carson fits the bill because he's not Trump.

Carson is the mild-mannered alternative to the self-trumpeting reality TV star. Trump, after all, was born into privilege, which he parlayed into vast wealth. Carson, an African-American raised by a single mother who couldn't read, parlayed his mother's insistence on her children's excellence into a barrier-breaking career as a brain surgeon. Trump bustled his way into first place by getting into brawls with the press and other candidates. Carson saw a bump in the polls by being the genial guy in last month's Fox News debate. He drew a big laugh in his closing statement when he accurately observed that he was the only candidate "to separate Siamese twins."

On Tuesday, I went to hear Carson speak at the Commonwealth Club in San Francisco. It will take a lot to convince me that he has the executive experience, political skills and foreign policy chops to take on intractable bureaucracies, partisans who will want to sabotage his success, China and the Islamic State group.

That said, Carson passed my first test. Whenever I see a new GOP candidate, I ask myself the question on every Republican's mind: Will this person embarrass me? Trump, Herman Cain and Newt Gingrich failed in short order. Carson, on the other hand, makes the GOP look smartly inclusive.

Unlike Trump, Carson doesn't write off entire groups as "losers." He told the full-house San Francisco audience, "We can't afford to throw any of our people away." Unlike President Barack Obama, who frequently points to racial inequities in local police forces, Carson seems determined to bring people together with an uplifting message. When he was a young doctor, people mistook him for an orderly, but he didn't see the mistake as deliberately racist. "When people know each other," he said, "it's a completely different situation."

Trump boasts that he has the perfect immigration plan: Deport all 11 million immigrants who are here illegally. Carson dispatched that fantasy when he said: "It sounds really cool, you know, 'Let's just round them all up and send them back.' People who say that have no idea what that would entail in terms of our legal system, the costs. Forget about it. Plus, where are you going to send them? It's just a double whammy." Carson proposed making undocumented immigrants with clean records guest workers. That sounds like a bureaucratic nightmare, as well. It also seems like the status quo, which is what America gets when ideology meets political reality.

At a news conference after the speech, I asked Carson about his view on San Francisco's sanctuary city policy. He gave a muddy answer: "A sanctuary city policy, in general, is not something I would agree with." And: "We are a country of rules." As president, what, if anything, would he do about sanctuary cities? "I have to do what I can do legally. Obviously, I would want to work with Congress" to establish national policies. That's a politician's answer, but not a strong answer.

Carson told the audience his first mission would be "to get our fiscal house in order." By simply refusing to increase the federal budget by one penny for three or four years, he said, he could balance the budget.

His suggestion sounded so good I contacted the Committee for a Responsible Federal Budget to ask whether it would deliver as promised. President Maya MacGuineas told me that if Washington froze all annual spending, it would "only take three years" to balance the budget. One problem: Somehow Washington would have to persuade creditors to forgo "the payments we owe them." That's not likely to happen. What about freezing everything but interest payments? Next problem: "That would take five years, and good luck telling seniors" that not only would they not be getting cost-of-living increases but also they might have to receive smaller payments in order to accommodate new people collecting benefits.

Freeze everything but debt payments, Social Security and Medicare, her team calculated, and Washington could balance the budget by 2030. She summed up Carson's proposal as "an example of making the choices look easy by not making them."

MacGuineas did appreciate Carson's view that not all federal programs have to grow. She also said Carson had a "legitimate point" when he hit the federal government for holding on to some 77,000 unused or underutilized buildings while leasing space. It's waste, pure and simple. When I told her that Carson said he wants to eliminate the home mortgage interest deduction as part of his flat tax plan -- individual tax rates would be capped at perhaps 10 percent -- she gave him credit for naming a popular tax deduction he would eliminate.

Carson's amazing career has been punctuated with accolades and awards. He won the NAACP's highest award, the Spingarn Medal, in 2006 and the Presidential Medal of Freedom in 2008. Albeit he's brilliant, I still wonder whether someone with no political experience can rule the White House. The audience didn't seem worried. Likewise Carson. It will be hard for his opponents to reduce his life of outperforming expectations into a punch line.