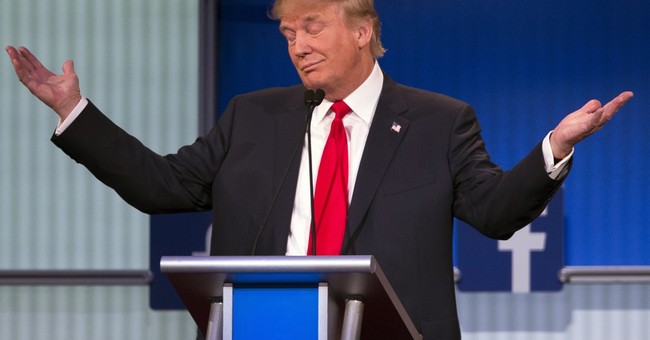 Donald Trump won some applause in Cleveland, but Thursday night spelled the beginning of his inevitable decline. It's fun for his fans to watch Trump flout convention, but eventually they figure out that this man will betray anyone.

From the opening, Trump showed what kind of Republican he truly is -- the snake variety. Fox News anchor Bret Baier asked the 10 candidates on stage to raise their hands if they refused to pledge to support the eventual GOP nominee and not run as an independent. Trump alone raised his hand.

Trump used to be a registered Democrat. He has donated to Clinton campaigns and Clinton causes. Before the reality TV star announced his candidacy, Bill Clinton reportedly urged Trump to get involved in the GOP primary. Now Republican voters are getting the picture: Trump might have no problem with helping Hillary Rodham Clinton by siphoning conservative votes away from the GOP in a three-way race.

Trump has his own private war on women. Fox News' Megyn Kelly asked the Donald about his references to women he doesn't like -- women he has called "fat pigs," "dogs" and "slobs." At first Trump tried to laugh off the question by saying he only used those words for comedian Rosie O'Donnell. Not true, Kelly responded. Trump then complained that this country is too politically correct. He is a bully who calls everyone names, yet whines when moderators ask him fair-game questions.

Why did he give money to the Clintons and other Democrats? To get them to do his bidding, he said. What did he get Hillary Clinton to do? "I said, 'Be at my wedding,' and she came to my wedding." Don't blame the Donald, though -- he doesn't. "Our system is broken," he trumpeted.

Trump will go the way of 2012 GOP presidential wannabes Michele Bachmann, Herman Cain and Newt Gingrich. So now who has the conservative chops to win primaries -- while looking like a winner who can appeal to voters outside the GOP base?

Not former Florida Gov. Jeb Bush, who seems to think he can win the presidency by keeping his head down. He actually said, "Mr. Trump's language is divisive." Divisive? Someone tell him, please, that's how Democrats talk. Trump had no business on that stage if he is ready to run outside the Republican Party. Why is Bush afraid to put this joker in his place?

Florida Sen. Marco Rubio, Wisconsin Gov. Scott Walker and New Jersey Gov. Chris Christie acquitted themselves well. Ohio Gov. John Kasich wasn't afraid to reach to the center. He told the audience he personally opposes same-sex marriage, but "I just went to a wedding of a friend of mine who happens to be gay. Because someone doesn't think the way I do, doesn't mean that I can't care about them or love them."

But the biggest standout wasn't in the primetime debate. Former Hewlett-Packard CEO Carly Fiorina won the early-bird debate with six other Republicans who didn't qualify for the top-10 gala by flouting conventional wisdom and showing a Republican could go after Trump and survive. "I didn't get a phone call from Bill Clinton before I jumped in the race," she quipped. "Did any of you?"