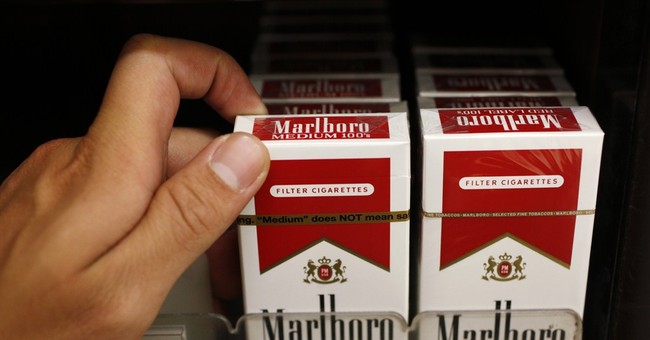 Trending
In Progressive World, there are at least four stages of legally becoming an adult.

On Tuesday, the California Senate voted to raise the age when young people can buy cigarettes, from 18 to 21. The Hawaii Legislature has passed similar legislation. A companion California bill would mandate that e-cigarettes fall under the same restrictions as tobacco smokes.

If the bills become law, 18 will make a Californian old enough to vote, to enlist in the military, to sign a contract, to buy a gun, to get a tattoo and to get married -- but not old enough to buy a cigarette. Not for three years.

It's also not old enough to drink.

I am old enough to remember the mantra, "Old enough to fight, old enough to vote." In 1971, responding to a system that allowed 18-year-olds to enlist in the military without letting them vote for who would run it, states ratified the 26th Amendment, which lowered the voting age from 21 to 18.

The companion slogan: "Old enough to fight, old enough to drink." Ergo the 18-year-old drinking age in many states. Washington responded with the National Minimum Drinking Age Act of 1984 -- which withheld a chunk of federal transportation funding from states with drinking ages below 21. Here conservatives must take the blame, as President Ronald Reagan signed the bill, passed by a Democratic House and GOP Senate, which effectively tells states what to do. This set a pattern for dual ages of adulthood.

I've written before against the 21-year-old drinking age. It doesn't stop college kids from drinking; we know that. And I don't think Washington has a right to tell a 19-year-old who works for a living that he or she is really a child and cannot make adult decisions. But when you ask politicians about lowering the drinking age to 18, they are not sure how to respond.

The issue has become one of those boutique conservative causes. University of Tennessee law professor Glenn Harlan Reynolds has advocated it. In 2011, Reynolds wrote in The Wall Street Journal, "In fact, 18-year-olds in America are old enough to do pretty much everything except drink." Now he would have to add "and consume marijuana," as even in the four states that have legalized recreational use of marijuana -- Colorado, Washington, Oregon and Alaska -- the legal age is 21.

At the same time, a California 14-year-old doesn't need parental consent to have an abortion.

In nanny city San Francisco, Supervisor John Avalos has proposed lowering the voting age to 16 in some elections. When I asked Avalos whether, in that spirit, he thinks the city should lower the legal age for smoking, he answered that enacting a law to give a teenager the right to vote is "very different from saying someone is adult." No lie; that teen won't be able to buy a beer for five years.

The final stage of adulthood? The Democrats' 2010 Affordable Care Act mandates that health plans provide coverage for parents' adult children up to age 26. It was a popular provision with parents whose college-graduate children could not get a job with health benefits. But then, to the nanny-state left -- with its proposals to squeeze soda drinking and ban single-use plastic bags and smoking (other than medical marijuana) -- we are all children, regardless of age.