I Pledge Allegiance to the 1st Amendment 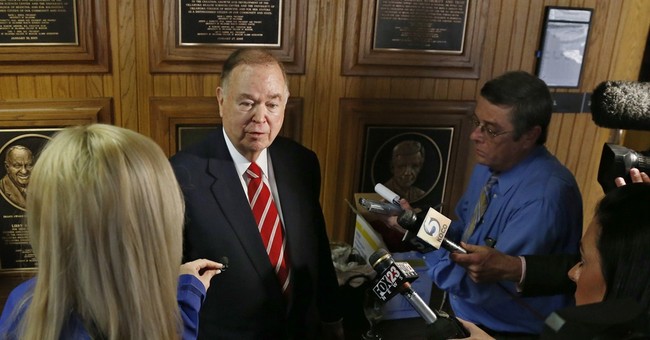 I understand why University of Oklahoma President David Boren chose to expel two students for singing a vile, racist ditty at a fraternity event. There is nothing funny about lyrics that make light of lynching and repeat the N-word. If students did that at a university that I administered, I'd want to toss them out, too.

Yet Boren was wrong to act as he did. As UCLA law professor Eugene Volokh wrote, "racist speech is constitutionally protected, just as is expression of other contemptible ideas; and universities may not discipline students based on their speech." Courts have consistently ruled to that effect. A free country doesn't want the government to educate only people with approved viewpoints.

And still, Boren's move appears to be wildly popular in academia. Sigma Alpha Epsilon's headquarters, which quickly began proceedings to expel the University of Oklahoma chapter, issued a statement in support of Boren's ouster of the two supposed ringleaders.

Boren wrote to the two frat boys that he was expelling them because of their "leadership role in leading a racist and exclusionary chant which has created a hostile educational environment for others." "Hostile environment," supporters point out, refers to federal guidelines that mandate equal access to higher education.

In recent years, student activists have used "hostile environment" claims to try to muzzle those whose unwelcome viewpoints might "trigger" feelings that make students feel less safe. (For example, a University of California, Santa Barbara professor told police that anti-abortion activists "triggered" a negative reaction in her that caused her to commit battery against a teenage abortion opponent and steal her poster.) There needs to be a high standard for "hostile environment," Peter Bonilla of the Foundation for Individual Rights in Education told me; conduct has to be severe, be persistent and prevent others from getting an education. Otherwise, one group can censor another because its ideas are offensive. Today it is racial slurs; tomorrow it could be a political position.

Let there be a thorough investigation. If it finds that the frat house discriminated against African-Americans, throw the book at it. In this case, however, Boren shuttered SAE and expelled Parker Rice, 19, and Levi Pettit, 20, without so much as a hearing. First the punishment and then the trial.

It is not as if the two young men wouldn't have otherwise paid. Pettit's parents were so appalled they released a statement that said, "He is a good boy, but what we saw in those videos is disgusting." After the video went viral, it would be hard to look African-American students in the eye. "You have no right to be free from the social consequences" of racist speech, Bonilla observed.

The American Civil Liberties Union of Oklahoma issued a statement March 10, after Boren expelled the two, which asserted, "The best antidote to hateful speech is the exercise of peaceful speech." That was thin gruel. Why didn't the ACLU immediately challenge Boren for expelling students for exercising their First Amendment rights? On March 12, the ACLU finally asserted that sanctions imposed on students must be "consistent with the First Amendment and not merely a punishment for vile and reprehensible speech." Call it a baby step.

Are you going to sue? I asked ACLU of Oklahoma Executive Director Ryan Kiesel. No one has asked for ACLU representation, he answered. "We're not ready to run to the courthouse yet."

Kiesel then added that campus prayer vigils and demonstrations make clear that "the marketplace of ideas is robust enough to respond to hateful speech." Bingo.

California saw the same forces at work this month after UC Irvine's student council voted to ban all flags in the student government's common space. It was an obnoxious decision. Student Khaalidah Sidney, who helped to write the resolution, wrote in the student newspaper that the intent was to protect students "who are undocumented and to whom the flag represents a constant struggle to gain American citizenship," as the U.S. flag is a "triggering symbol of U.S. imperialism and neo-colonialism." Triggers again.

Republican state Sen. Janet Nguyen is introducing a measure to allow Californians to pass a constitutional amendment to ban flag bans at state-funded colleges and universities. "I came to this country as an immigrant searching for freedom and democracy and would not be here today if it were not for the American flag," Nguyen stated in a press release.

I see a non-problem in search of a headline. Shortly after the flag ban made UC Irvine a national laughingstock, UC Irvine student leaders vetoed the ban. It's over already. But Nguyen warned me this could happen again -- and again.

So be it. If students pass a crazy flag ban, parents can dissuade their children from attending a flag-free college. Taxpayers are free to question whether state institutions provide value for precious tax dollars. Free speech shows the way.

As for Boren, he knows better than to expel students for exercising their free speech rights. Or maybe he doesn't -- which does not speak well for the University of Oklahoma.