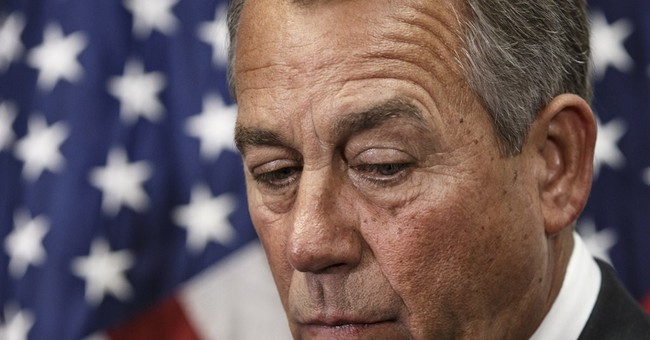 Trending
"I don't believe I'm poking anyone in the eye," House Speaker John Boehner asserted Wednesday. That was after His Speakership told the media that he had invited Israeli Prime Minister Benjamin Netanyahu to speak before a joint session of Congress about "the grave threats radical Islam and Iran pose to our security and way of life."

Of course it was a poke in the eye. Boehner admitted he did not consult with the White House before inviting Bibi. Netanyahu wants Congress to threaten tougher sanctions against Tehran. During his State of the Union address Tuesday, President Barack Obama warned Congress he would veto any such legislation.

Boehner's gambit stunned the White House. Press secretary Josh Earnest called the move a breach of protocol. House Minority Leader Nancy Pelosi said the invitation was "out of order." When she was speaker, Pelosi argued, she coordinated with GOP leaders before inviting heads of state. Netanyahu's speech was moved to March 3, so Pelosi criticized Boehner for inviting a head of state within two weeks of Israel's March 17 elections. "It's hubris," Pelosi charged.

Is it hubris? Or is it payback? The president has no problem doing an end run around Congress as he unilaterally undermines laws that lawmakers duly enacted. Two can play at that game.

"I find it hard to believe the Israel invitation would have been extended if the president hadn't been so nasty," opined Hoover Institution foreign policy fellow Kori Schake. Rather than threaten Congress in the State of the Union address with a veto if lawmakers pass sanctions legislation, Schake argued, Obama should have thanked Congress for not passing said legislation while Secretary of State John Kerry was negotiating.

The irony here is that Pelosi was in a similar position in 2007 when she met with Syrian President Bashar Assad. "We came in friendship, hope, and determined that the road to Damascus is a road to peace," Pelosi told reporters.

Given that insurgents were crossing from Syria into Iraq to fight U.S. troops, President George W. Bush considered Pelosi's adventure in diplomacy "counterproductive." But with public approval of the Iraq War in the toilet, the San Francisco Democrat's visit was popular with the liberal base. Pelosi's Damascus sit-down was good politics, if dubious policy.

Ellen Tauscher, the undersecretary of state for arms control and international security and a former congresswoman from California, agrees with Pelosi's "hubris" assessment. Kerry is involved in negotiating a "six-handed deal" among world leaders and Iran, Tauscher noted. If there is no deal for the Iran nuclear talks by June 30, then tougher sanctions will return. Instead of applying pressure and engaging in "mischief-making," Tauscher believes Boehner should be quiet and give diplomacy a few more months. It is in America's national security interest to coax Iran toward the light.

"My criticism of Speaker Boehner is that this smacks of partisan politics and trying to embarrass the White House," quoth Tauscher. (Sounds like Pelosi's Syrian trip to me.)

Fly in the ointment: This isn't right vs. left. Some Democrats do not trust Tehran. At a recent hearing, Sen. Bob Menendez, D-N.J., scolded Obamaland for spewing out "talking points" that sound as if they "come straight out of Tehran."

Now the politics favor Boehner. Schake believes that a Netanyahu speech could increase the number of senators who, like Menendez, would support a bill to pressure Tehran to stop stalling. If you're a D.C. pol, do you want to be on the side that believes in the honest intentions of Tehran or on the side that advocates tough measures a la Bibi? And what are Democrats going to do, flip off pro-Israel constituents by boycotting Netanyahu's speech? Hammill tells me Pelosi plans to attend.

If a majority in Congress is ready to buck the president on a foreign policy initiative, Schake told me, it's a sign the administration is pushing a bad policy or has failed to lay the groundwork to sell it.

One more thing: In 2007, Syria was abetting Sunni insurgents. Israel is our ally.