Obama Croons: I Did It My Way 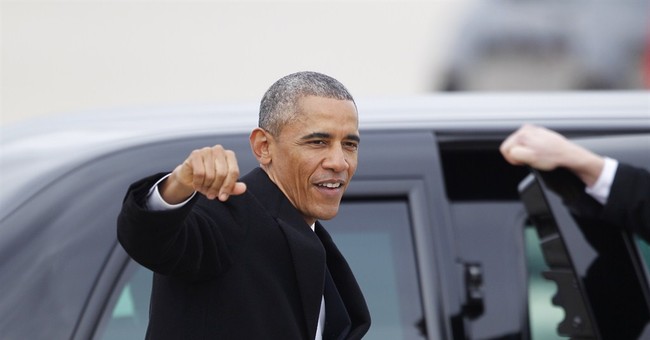 Trending
As President Barack Obama delivered his State of the Union speech Tuesday night, I saw all of 2015 flash before my eyes. It was a smart speech that wisely stuck to "middle-class" values and was shrewdly short on details. I saw another year of the president not compromising. For Republicans, it was Groundhog Day -- an endless loop of the president talking up bipartisanship without practicing it.

"Bold Call to Action in Obama's State of the Union, Even if No Action Is Likely," read one headline. And below it: "Obama Speaks as Though His Party Won the Midterms." Both headlines hail not from a conservative rag but from The New York Times.

"Watching an emboldened Mr. Obama, it would have been easy to forget that he was standing there just two months after the biggest electoral repudiation of his presidency. Indeed, with economic indicators on the rise and his own poll numbers rebounding slightly, he made no reference at all to the midterm elections, offered no concessions about his own leadership and proposed no compromises to accommodate the political reality," wrote Times reporter Peter Baker.

I quote the Times because if I wrote what Baker wrote, some readers of my column in the paper where I work, the San Francisco Chronicle, would yelp; they would cry foul and see only sour grapes and knee-jerk opposition. A confident Obama, unbowed and crowing he won in 2008 and 2012, was good clean fun for the liberal base.

But what does the rest of America get out of this bluster? Bupkis.

GOP leaders didn't do the party any favors by picking newly elected Sen. Joni Ernst of Iowa to deliver the Republican response. In eat-your-vegetables mode, Ernst recalled her small-town childhood, when she had only one good pair of shoes -- so when it rained, her mom slid a plastic bread bag over each foot. "They had very little to call their own except the sweat on their brow and the dirt on their hands," Ernst said of her parents and grandparents.

All I could think was: Is this how the GOP thinks it can attract new voters? Obama is talking about "free" community college -- a terrible idea that will drive up tuition -- and the GOP counters by extolling the good ol' days when Iowa kids had only one good pair of shoes? Shoot me.

Methinks the GOP has come down with a bad case of opposition fatigue. Indeed, Ernst began her talk saying that "rather than respond to a speech," she'd talk to voters about their priorities. And then she went back in time.

Better to have said: Democrats mean well, but their policies simply don't work. They say they want to eliminate income inequality, but their policies have put the squeeze on working families. If raising taxes on top earners actually helped the middle class, median household income would not have slumped during the Obama years. If Obama's "middle-class economics" truly worked, employers would not hire so many part-time workers. If the Affordable Care Act delivered as promised, average families would be saving $2,500 per year in health care premiums annually -- but they are not.

It was nice to hear the president embrace "middle-class economics" for 2015. But what makes him think he can steer the country to prosperity with one paddle?