Spare Me the Sermon on Seizing Sermons 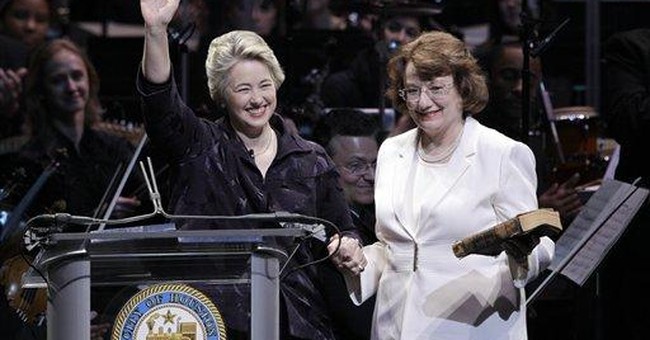 If you believe Houston Mayor Annise Parker, then you have to believe that when lawyers for her city subpoenaed five local pastors and demanded their sermons, the episode represented an unfortunate instance of lawyer overreach, with no intent to harass or intimidate the opposition.

This story begins in May, when the Houston City Council passed, by an 11-6 vote, an equal rights ordinance that banned discrimination based on sex, race and national origin -- as well as sexual orientation and gender identity.

Some local church leaders objected. They petitioned to put a measure on the ballot to repeal the ordinance. They gathered signatures -- more than the 17,269 needed to qualify for the ballot, according to the city secretary. But then City Attorney David Feldman entered the fray. He found "irregularities" -- the signature gatherer wasn't a registered city voter and did not sign the petition -- that put the signature count below the required threshold. The result: There is to be no popular vote on whether to retain or repeal the measure -- and probably no New York Times editorial about heavy-handed voter suppression in Texas.

The petitioners decided to sue to get their measure before voters. Now City Hall is fighting back. Last week, attorneys sent subpoenas to five pastors that demanded "all speeches, presentations, or sermons related to (the equal rights ordinance), the Petition, Mayor Annise Parker, homosexuality, or gender identity." Fox News' Mike Huckabee jumped on the story. Soon conservative media were abuzz with the news that Houston's first openly gay mayor had demanded that pastors hand over sermons -- yes, sermons -- which they never had any desire to hide from public view.

On Friday, Parker and Feldman announced that attorneys had "revised, not withdrawn," the subpoenas. They no longer demand "sermons" -- or the pastors' views on the mayor and gender identity.

"The wording was overly broad," quoth Parker, who also faulted "deliberate misinterpretation." The plaintiffs' attorneys should have known that big-law-firm attorneys working pro bono didn't really mean what they had put in writing. See, she's the victim. Those slick Christian advocacy lawyers outsmarted her.

South Texas College of Law professor Charles W. "Rocky" Rhodes expects a judge to quash the subpoenas. Rhodes isn't sure whether the lead-footed attorneys were engaging in a) "a scorched-earth litigation process" to make the lawsuit too expensive for opponents to pursue or b) "harassment on the basis of religious belief." (Maybe it's both.)

What were the questions about the pastors' views on the mayor even doing in the subpoenas? The Houston Chronicle, which supported the ordinance, editorialized that the city's case is and should be about "whether signatures are valid."

Instead, the city engaged in an intolerant political inquisition that threatened to chill religious dissent. Good thing it backfired. Huckabee urged viewers to send Parker a Bible. I think folks should send her a copy of the First Amendment.