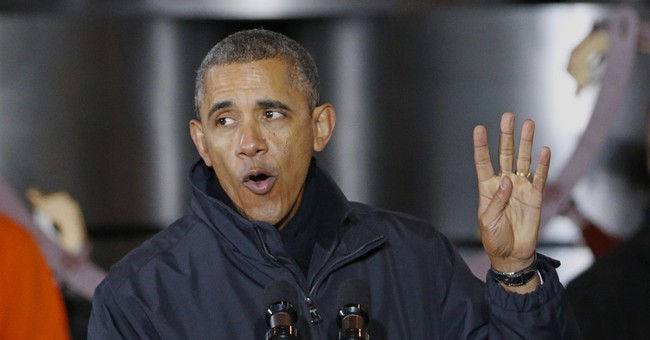 President Barack Obama delivered a good State of the Union address Tuesday night, but he couldn't get past an inconvenient truth: He means well, but his schemes don't work.

Democrats championed the Affordable Care Act to increase the number of Americans with health coverage, but their plan led to the cancellation of private plans for about 5 million Americans, according to The Associated Press. Unless they qualify for subsidies, many now face higher premiums, often for plans that limit access to doctors.

"More than 9 million Americans have signed up for private health insurance or Medicaid coverage," the president boasted Tuesday.

Warning: Washington Post fact checker Glenn Kessler called the claim that 6.3 million have signed on to Medicaid "fuzzy," given that many enrollees might have qualified outside Obamacare. Also, the claim that 3 million have enrolled in exchanges is "open to question" because the figure includes those who haven't paid premiums.

A recent McKinsey & Co. survey reported, "Only 11 percent of consumers who bought new coverage under the law were previously uninsured." More than half of those who chose not to participate cited "affordability" as a big factor.

"If this keeps up there won't be a 'death spiral,'" industry graybeard Robert Laszewski quipped in his blog. "Heck, so far the insurers are just re-enrolling their old customers at higher rates!"

In the past few months, readers have sent me stories of how Obamacare has affected their families. Some are thrilled. Subsidies have reduced their premiums. Pre-existing conditions no longer present an obstacle. Some progressives informed me they are happy to pay higher premiums if it means others have access to solid coverage; they only wish Obamacare were single-payer.

Most correspondents whose private plans were canceled -- among the 1.1 million in California -- are furious. Reader Marco Vailetti feels "screwed big time." He has not enrolled his family in a Covered California plan, because he "cannot justify paying double in monthly premium that has a greater deductible" than he had before.

A San Franciscan confided that he bought a new policy but already canceled it because he could not afford it. As of Feb. 1, for the "first time in my life I am without health care," he said.

Bruce Richardson of Oakland still is struggling with enrollment. At age 64, with advanced cardiovascular disease, he wrote, "I believe we have seen the future of health care, and it doesn't look good for me."

Others signed on to Covered California plans by tightening their belts. David Latham told me, "In order to pay for the 59 percent increase in my premium, I had to take money that I was putting into my 401(k) plan and apply it to my health insurance. So now my retirement plan will have less money in it."

Industry insiders have their own laments. Administration is a nightmare, agent Tony Uccelli wrote, but worse: "In the end, what really happens, is the people who were really paying for all the care before, now pay more, (SET ITAL) plus (END ITAL) the level of service they got just got destroyed."

Obama could have expanded Medicaid without mandating an end to so many of last year's private plans. Democrats could have set up a system that didn't gut the private coverage of self-employed people who had done everything right. Instead, they chose to dismantle the individual market as they lied about how people would be able to keep the plans they liked.

"My question to Obama is simple," Vailetti wrote. "Why penalize hard-working law-abiding citizens like me?"