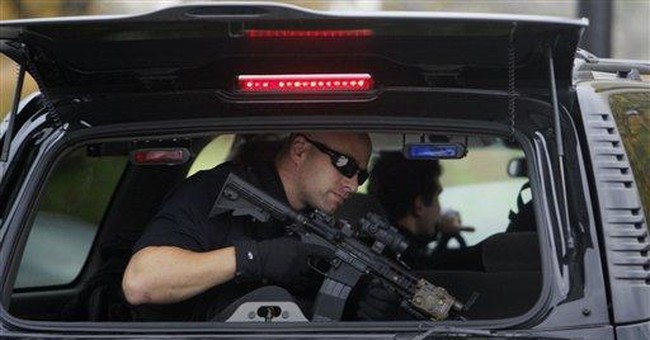 Trending
On Friday, a heavily armed young man walked into a Connecticut elementary school and murdered 20 first-graders and six adults before he killed himself. Even in a country inured to gun violence, this crime is too heinous to contemplate.

Now the question is: Does Washington pass a bad law just to do something, anything, even something that doesn't enhance public safety?

The New York Times reports that all three guns -- a Glock and a Sig Sauer handgun and a .223 Bushmaster semiautomatic rifle -- brought by the shooter to Sandy Hook Elementary School were "legally acquired and registered" by the shooter's mother, who was his first victim.

The Sandy Hook shooter used 30-round clips, which were illegal under the 1994 federal law -- except that old large-capacity magazines were exempt. The Washington Post reports there were 24 million such magazines in private hands at the time the law passed.

A University of Pennsylvania study of the federal assault-weapons law found that while gun violence declined during its 10-year existence, "We cannot clearly credit the ban with any of the nation's recent drop in gun violence. And, indeed, there has been no discernible reduction in the lethality and injuriousness of gun violence."

It's been my experience that the more people support bans like the 1994 assault-weapons law, the less they know about guns. They often use the term "semiautomatic" as if it were synonymous with "assault weapon." They couldn't pick out an "assault weapon" in a firearms line up.

They say they don't want to mess with the rights of gun owners, but if the gun-control lobby manages to pass laws that limit high-power weapons, it then will try to ban "junk guns" -- or cheap guns.

Over the weekend, Sen. Dianne Feinstein, D-Calif., the author of the 1994 federal ban, said that on the first day of the new Congress she will introduce an updated assault-weapons ban, which specifically would ban the .223 Bushmaster. A press release explained that her new bill would ban the "sale of more than 100 assault weapons" and limit clips to 10 rounds, while protecting "gun owners by exempting more than 900 specific hunting and sporting weapons."

The problem: No law can do both things well.

I'm all for limiting clip rounds to 10 bullets and closing background-check loopholes. But judging by the press release, Feinstein's new bill looks like another gun bill that has the potential to reduce the death toll in a mass shooting -- obviously a good thing -- but at a cost.

The cost is that law-abiding gun owners, and those who are not so law-abiding, are going to run out and buy guns and bullets, pronto. They see a bunch of politicians, who don't know guns, about to mess with their right to self-protection. And it doesn't make them feel safer. Me either.