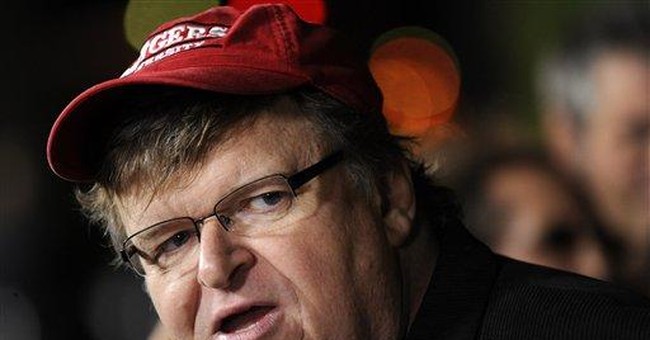 "We reject anyone who tells us America is broke and broken," he explained. When President George W. Bush was in the White House, Democrats railed against deficit spending. Now they don't even seem to notice red ink.

The new message: A government can't really be broke because politicians have the power to raise taxes.

In Moore's America, as long as lawmakers preside over spending increases, taxpayers have an obligation to keep ponying up -- whether they like it or not.

It doesn't matter if voters send signals to stop the spending spree by electing more Republicans to the House, as well as governors like Walker. Public employee unions have a "right" to engage in collective bargaining for benefits -- even if federal workers don't have that power -- but there is no right for voters to push for an end to the growth in spending.

Once a state spends, it must keep spending. It's like the SEIU lawsuit against then-Gov. Arnold Schwarzenegger's furlough policy for California public employees. The 2010 complaint lamented "the governor's unreasonable insistence to avoid tax increases to pay the judgment and to keep the state services intact."

Quoth Moore: "If those who have the most money don't pay their fair share of taxes, the state can't function." The filmmaker argues, the economy only suffers if the wealthy " (SET ITAL) get to keep most of their money (END ITAL)." (My italics.)

I share much of Moore's rage at the Wall Street swells who sideswiped the American economy. They bundled bad paper, sold it as good paper, and their only excuse is that, their bloated salaries notwithstanding, they really didn't know what they were doing.

But I am not so angry at the Wall Street meltdown that I want an America in which people who create wealth don't have title to most of their earnings and savings.

The top 1 percent of earners pays 38 percent of federal income taxes. Whether you consider that fair or not, noted Richard Morrison of the Tax Foundation, "at the very least we know that 'the rich' aren't dodging taxes in the way that populist critics frequently suggest."

This is where left-wing economists frequently invoke the historically highest marginal tax rate -- 91 percent -- under President Dwight D. Eisenhower. Not that they ever would advocate such a thing, mind you. They're just pointing it out. They don't argue that higher taxes will create more wealth so much as that higher taxes will create more equality. (If top earners leave the state, they're right.)

And apparently, the ticket to economic equality is for Americans to ignore the heavy load of debt that taxpayers must shoulder because politicians have handed out benefits and pensions to public workers regardless of the cost.

The answer to Wisconsin's woes -- like the answer to America's red ink -- is to keep feeding the beast.

"The country," Moore assures, "is awash in wealth and cash. It's just that it's not in your hands."

Then again, your hands are not really your hands, unless they're extracting more money from your wallet.