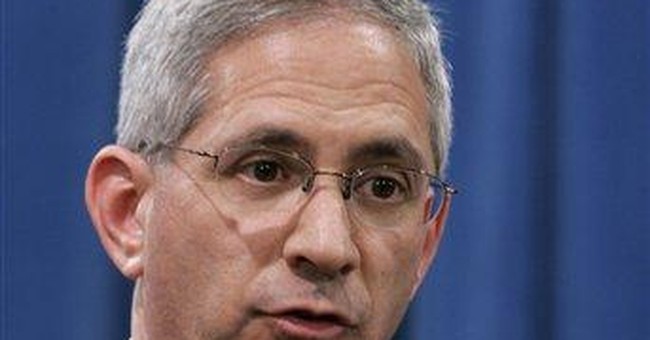 Some time after he bowed out of the governor's race in January and jumped into the California GOP primary to challenge Sen. Barbara Boxer, Tom Campbell turned from a mild-mannered law professor into Rambo. Professor Rambo.

He wrote a piece for www.foxandhoundsdaily.com against "Mirandizing" (reading Miranda rights to) terrorism suspects. He supports the new pumped-up Arizona immigration law. Manmade global warming? Campbell told The Chronicle's editorial board that he goes by what he reads in the Economist. And: "I must say, the IPCC (Intergovernmental Panel on Climate Change) made a hash of it."

Campbell has held a special place in California political lore as the moderate who lost the three-way GOP primary for an open U.S. Senate seat to the very conservative Bruce Herschensohn in 1992. Had Campbell prevailed, it is likely Boxer would not have won the Senate seat she holds today.

That notion took a beating in 2000, when Campbell ran against Sen. Dianne Feinstein. He failed to raise serious campaign money, and she buried him. He confessed, "My attempt was honorable, hard-working and did not succeed."

When Campbell decided to challenge former Hewlett-Packard CEO Carly Fiorina and Assemblyman Chuck DeVore, R-Irvine, for the GOP nomination, the big question was whether this effort would take on the flavor of another honorable but doomed crusade.

To my surprise, Campbell has become a moderate on fire. Forget the social issues that lost him votes in 1992, he argues; 2010 is the year of the fiscal hawk. Who better to lead the charge than a former congressman who opposed pork spending when pork spending was popular?

The professor still lives. Asked what he would do to increase U.S. trade, Campbell discussed the need for a proper valuation of China's renminbi and discussed how international treaties have distorted global currency.

Some politico pros argue that Fiorina has a better chance of beating Boxer. Fiorina's telegenic and gutsy. She can put money into the campaign. Jon Fleischman, publisher of Flashreport.org, notes that Fiorina excites the donors whom Campbell leaves cold.

Running against a woman could throw Boxer off her game. And Fiorina has a great story -- a woman who started as a secretary and rose to become CEO of a Fortune top-20 corporation.

Fiorina has been a solid candidate, an aggressive campaigner and an able debater. Maybe her supporters are right.

As for DeVore, he's a happy conservative warrior with a military resume. But when he voted against Republican Abel Maldonado, Gov. Arnold Schwarzenegger's pick to fill the vacated lieutenant governorship, that told me DeVore wants to go to Washington to talk to himself.

When a candidate starts dropping in the polls, it is standard practice for commentators to jump on the candidate's horrible campaign organization. As one who hit former eBay CEO Meg Whitman when she had a 50-point poll lead over her opponent, Steve Poizner, allow me to defend the GOP gubernatorial wannabe now as her lead is dwindling. Whitman has run an issues-rich campaign, with smart proposals on how to close the state's perpetual budget shortfalls.

She understands the sort of changes that need to be imposed on the state's cushy pension system. She had the guts to tell a group of law enforcement officials she wanted to raise their retirement age from 50 to 55. She understands the business environment employers need to create good jobs.

The problem is, Whitman hasn't figured out how to surmount the impression that she simply can spend her way into top elective office.

She certainly has put in the hours. Truth be told, Whitman has given more media interviews than she gets credit for. But you get the feeling that she would rather dump another $5 million or $10 million into her campaign -- to date, she has poured a record $64 million of her own money into the race -- than debate on the issues.

With that attitude, how can Whitman take on the presumptive Democratic nominee, Jerry Brown?

For his part, Insurance Commissioner Poizner has put some $21 million into his campaign, but he also has spent years involved in public causes. In so doing, he has demonstrated respect for the institutions he seeks to govern. After he made his millions, but before he ran for office, Poizner served as a White House fellow and served as a volunteer teacher at a San Jose public school.

He ran for the Assembly and lost. In 2006, he ran for insurance commissioner and won. When he talks about state issues, he doesn't speak like a candidate who hired someone to write issue papers; he has personal history with the challenges the next governor will face.

For months, as know-it-alls were throwing dirt on his political grave, Poizner stuck to a strategy that now has given him a shot at victory. Maybe he'll win; maybe he won't. But Schwarzenegger would have done a better job if he had Poizner's brand of discipline.