Meg Whitman Can Run a Company, but Can She Govern? 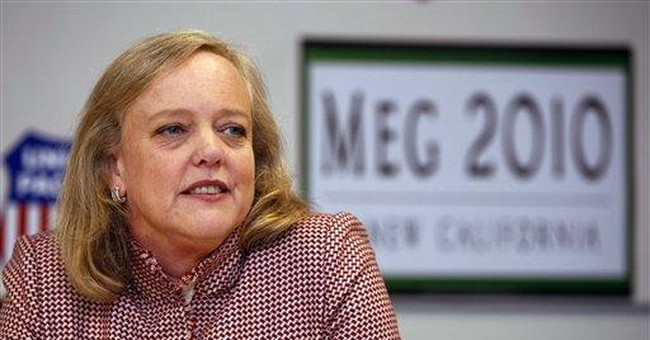 It took me five months to get my first interview with former eBay CEO and California GOP gubernatorial hopeful Meg Whitman, and when I did, it was after a press event where the news reporters were not allowed to ask questions. Swell.

Her supersize campaign has been rolling her out like an Easter egg. She has been in a shell -- for which she has paid handsomely. She has contributed nearly $40 million to her campaign, yet she told me she and her husband, Griff Harsh IV, fly coach, "because it's cheaper."

The big question is: Can she govern? She has a background that might help. Her book, "The Power of Many," co-written with Joan O'C. Hamilton, presents a methodical troubleshooter whose first job as a newly minted Harvard MBA was to figure out how big the hole should be on a shampoo bottle. She trained to become the kind of management consultant "who can go into virtually any kind of business, analyze the situation and come up with an effective plan to solve problems and achieve goals." When working with a food-service company, her team studied the "physical movements of cooks and waitstaff" and came up with "a method to save hours of food preparation time by washing potatoes in dishwashers."

It's this creative yet methodical approach that is lacking in the administration of Gov. Arnold Schwarzenegger, for whom budgeting has been a matter more of art -- well, of special effects -- than of science.

But can a former CEO who once cut costs by fiat learn how to cut deals with a big-spending liberal Legislature? Whitman and Harsh plan to move to Sacramento, buy a house and put down roots. She wants get to know all the lawmakers by name. Could she name some lawmakers with whom she could work? State Sen. Tony Strickland, R-Thousand Oaks, and Assemblyman Nathan Fletcher, R-San Diego. But she believes she can help Democrats by making them "heroes" if they work with her to keep employers from leaving California.

Whitman acknowledged that she recently told KNBC that she would "veto virtually" all bills that do not advance her three priorities of creating jobs, slashing government and reforming public schools.

Whitman believes the key to balancing the budget is boosting the economy, but she also wants to pare state government by some 40,000 employees -- by the most popular method of all, attrition.

There were no eBay unions. What is more, Whitman never has gone toe to toe with the public employee unions who have blocked Schwarzenegger's reforms in the past.

This is where Whitman's "right person, right job, right time" management mantra comes in. When I asked about the public furor likely to follow if she were perceived as a veto-happy obstructionist governor, Whitman replied, "Or not. I actually think the public might be thrilled to death."

"If your ratings go down, it's OK," she said. And: "You will never be popular in a turnaround." Yet her model of an executive-turned-politician is New York Mayor Michael Bloomberg -- and he is popular. And in her mind, California needs a turnaround. After she had been at eBay a few years, Whitman said, the executive staff began to wonder: If we had to start eBay all over again, would we do it in California?

Which state would you pick? I asked. She answered, "Probably Texas."