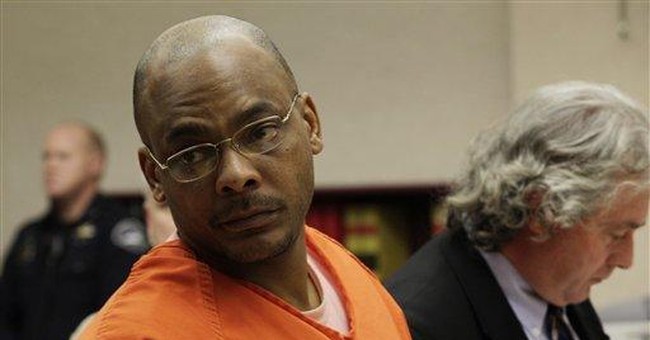 There is no need to tiptoe gingerly around this topic: Maurice Clemmons, who was shot and killed as authorities tried to apprehend him for the shooting deaths of four Washington police officers -- is former Arkansas Gov. Mike Huckabee's Willie Horton.

Horton, you might recall, is the convicted killer who raped a woman while wrongly released as part of a prison furlough program supported by former Massachusetts Gov. Michael Dukakis -- thus helping to torpedo the 1988 Democratic presidential nominee's bid for the White House. The Clemmons story likewise should kill any chance of Huckabee winning, should he run in 2012.

Clemmons was 17 in 1989 when he was convicted on a string of felony charges including aggravated robbery, burglary and possession of a gun at a school, and sentenced to a jaw-dropping 108 years. Huckabee told Joe Scarborough's radio show, "If he were a white kid from an upper middle-class family, he would have gotten a lawyer and some counseling. But because he was a young black kid, he got 108 years."

The parole board and a judge supported the release, even though Clemmons had more than two dozen rule violations while in prison, including citations for fighting in 1998 and 1997. Arkansas Department of Correction spokesperson Dina Tyler described Clemmons as a teen who entered prison "angry, aggressive and lacking coping skills," who had outgrown that stage.

Unfortunately, Clemmons had not outgrown his menace-to-society stage. Within a year of his release, he was back in prison on robbery charges. And once again, Clemmons won parole in 2004. In a statement, Huckabee said that if Clemmons killed the four officers, "this horrible tragedy" would be the "result of a series of failures in the criminal justice system in both Arkansas and Washington state."

Be it noted, Huckabee opened that door. I am especially angry at Huckabee because I support the pardon system. With so many nonviolent, first-time drug offenders serving long federal sentences, there should be more -- not zero -- sentence commutations from the Obama White House.

But the pardon system works only when executives do their homework lest they release inmates who are violent or sure to re-offend.

When I looked into Huckabee's pardon record in 2006, I expected to praise what became his more than 1,000 pardons, including 163 commutations.

In 2004, Huckabee commuted the sentence of convicted murderer Denver Witham after prosecuting attorney Robert Herzfeld revealed that Witham had omitted some of his convictions on his pardon application. When Herzfeld wrote a letter to Huckabee suggesting that the governor accept more public input on clemency issues and explain his reasons for each decision, an aide responded that the governor laughed out loud at Herzfeld's letter, closing, "I wish you success as you cut down on your caffeine consumption."