Politics of the Pardon 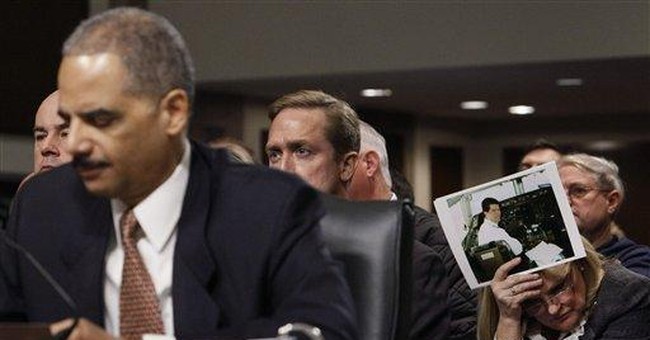 On Wednesday, President Obama will issue the White House's standard hokey pardon of a Thanksgiving turkey. It goes with the job.

That's good news for the lucky turkey, but not much help for the many nonviolent first offenders languishing in federal prisons because, nine months into office, Obama has yet to exercise his presidential pardon power.

According to political science Professor P.S. Ruckman Jr. of Rock Valley College in Illinois, Obama, a former constitutional law professor, has taken longer to use the executive pardon and commutation power than all but four presidents -- George Washington, John Adams, Bill Clinton and George W. Bush.

Obama hasn't pardoned a single ex-offender, even though about 1,200 people have asked for pardons because they have turned their lives around, expressed remorse for their crimes and now want to wipe the criminal slate clean of long-past offenses for which they paid the penalty.

Nor has Obama commuted the sentence of any of the 2,000 or so federal inmates seeking sentence reductions -- many because of draconian federal mandatory minimum sentences.

"We had certainly hoped that by now President Obama would have used the pardon power," said Molly Gill of the sentencing-reform group Families Against Mandatory Minimums. "We are a little bit surprised and a little bit disappointed."

This is where a number of readers no doubt are talking back to the paper and saying that it's just fine with them if Obama keeps career criminals behind bars, thank you very much.

Of course, the pardon doesn't free anyone. It is a reward for reformed offenders, who, after serving their sentences, have led exemplary lives and want a clean criminal slate so that they can vote or look for a job without revealing their past.

The commutation power is more important than ever, as flawed federal mandatory-minimum sentences too often inflict grossly disproportionate sentences on low-level drug offenders, disproportionately African-American, while the feds let drug kingpins who testify against others cut deals.

Of course, Obama shouldn't commute the sentences of violent or career criminals. But he could use it to free -- under supervised release even -- the likes of Clarence Aaron, a Louisiana college student who was arrested after facilitating two drug deals in 1992. Aaron was guilty and hence deserved to serve time in prison. But it's hard to see justice in a prosecution that meted out lesser sentences to the professional dealers and their minions -- men with criminal records who knew enough to testify against the new kid. As for Aaron, who was foolish enough to plead not guilty, he was sentenced to life without parole for a first-time nonviolent offense.

Last December, President Bush turned down Aaron's request for a commutation. His supporters have put their hopes in Obama.

But the new president doesn't seem eager to use his unfettered pardon power to correct sentencing injustices for the politically unconnected.

Look at Obama's choice for attorney general, Eric Holder. When Holder worked for the Clinton administration, Ruckman noted, "he wouldn't take the time, energy or effort to make it a regular feature of government."

"But he would, if you will, make an effort in wildly controversial situations." Such as: Holder's "neutral leaning positive" recommendation for the pardon sought by fugitive gazillionaire Marc Rich and his role in the 1999 Clinton pardons of 16 Puerto Rico independence terrorists.

When you think about it, the pardon petition is the rare Washington exercise that encourages politically unconnected people to petition their president for relief. But like Bush and Clinton before him, Obama seems to be hoarding this power. It's as if Team Obama sees justice as perk, not an equal right.