The Mysterious Case of Scottish Justice 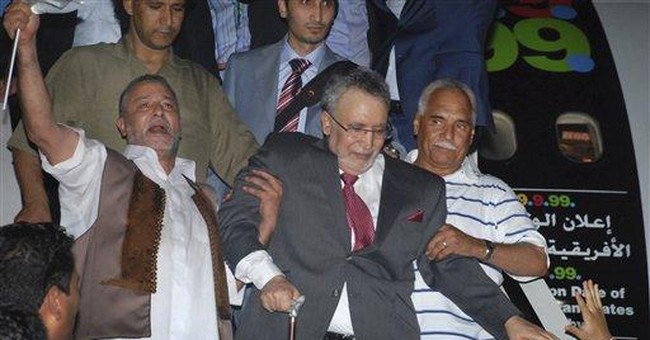 When convicted Pan Am Flight 103 killer Abdel Basset Ali al-Megrahi landed to a hero's welcome in Libya last week, there was no question about it: Our Betters in Europe got rolled.

They were undone by the vainglory of Scottish Justice Secretary Kenny MacAskill, who authorized Megrahi's "compassionate" early release for terminal prostate cancer. MacAskill explained: Compassion means "remaining true to our values as a people. No matter the severity of the provocation or the atrocity perpetrated." Sure, there's a place for justice -- but smugness first.

MacAskill told the Scottish Parliament Monday that Tripoli had promised to handle Megrahi's homecoming in a "low-key and sensitive fashion." Well, guess what: A government that masterminded the 1988 bombing -- which killed 270 people, including 11 on the ground in Lockerbie -- didn't keep its word.

The tarmac crowd waved Libyan and Scottish flags. And in an apparent effort to further embarrass Brown, Khadafy released a statement thanking "my friend Brown," his government, and the royal family for "encouraging the Scottish government to (make) this historic and courageous decision."

While MacAskill asserted that he alone made the decision to release Megrahi, he has noted that No. 10 Downing St. negotiated a Prisoner Transfer Agreement with Libya while "the Scottish Prison Service had only one Libyan prisoner in custody."

A British Foreign Office spokesman told the New York Times there had been no "deal in relation to Megrahi and any commercial interests in Libya." But as British papers have reported, Brown and his ministers had discussed Megrahi's release in meetings with Khadafy and his son. And as the Times reported, Brown and predecessor Tony Blair intervened in negotiations on the transfer agreement as "Libya awarded Britain a major oil contract, a $900 million deal" involving British Petroleum and "dangled the prospect of others."

President Obama got rolled, too. Before the Pan Am bomber landed, Obama told the press that he had informed Tripoli that Megrahi should not be "welcomed in some way but instead should be under house arrest."

Khadafy renounced weapons of mass destruction when President George W. Bush was in the Oval Office, but he sure doesn't act afraid of this White House.

This ending, however, was written in 1998, when the international community decided Scotland would try accused bombers in the Netherlands. The United Kingdom has no death penalty, which is what he deserved. Three Scottish judges unanimously acquitted another suspect in 2001, but found Megrahi, a Libyan intelligence agent "of fairly high rank," guilty. His life sentence made Megrahi eligible for parole after 27 years.

Thanks to MacAskill's sense of compassion, Megrahi walked free after eight years. FBI Director Robert Mueller lambasted MacAskill for a release that "gives comfort to terrorists around the world." But that comfort begins when a country's "justice" officials put their values before any atrocity.

Racist Professor Demands a 'Conviction of America' After Chauvin Verdict
Townhall
Press Sec. Jen Psaki left out one tiny detail when speaking of the police shooting of Ma’Khia Bryant
Twitchy
Tucker Carlson Causes Eruptions by Discussing Elephant in the Room of the Chauvin Jury
Redstate
Insanity Wrap #191: Did Jury Intimidation Play a Part in the Chauvin Verdict?
PJ Media