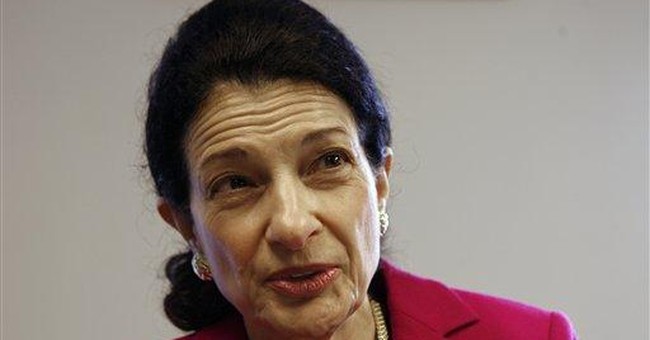 The latest infamous incident of Major Airline Tarmac Dysfunction occurred in Minnesota last weekend when a severe storm curtailed Continental ExpressJet Flight 2816. The flight, bound from Houston to Minneapolis-St. Paul, was redirected to Rochester, Minn., and landed around midnight. Then, because some person or persons made an unconscionably stupid call, the airline did not release the 47 passengers until 6 a.m.

Passenger Link Christin described the experience as a "nightmare" -- thanks to crying babies, one smelly toilet and no food. The worst part: the whole mess appears to have been eminently avoidable, as the Minneapolis Star-Tribune reported that a Delta flight that also was diverted to Rochester that night allowed its passengers to deplane at 3:30 a.m.

I almost feel sorry for the airlines. They are desperate to kill the Airline Passenger Bill of Rights, a measure sponsored by Sens. Barbara Boxer, D-Calif., and Olympia Snowe, R-Maine, which was approved unanimously by the Senate Commerce Committee.

Then they failed so monumentally that they may well have thrown a few holdout votes into the yes corner.

Every time a stuck-at-the-gate horror story makes cable news, former Napa real estate agent Kate Hanni pops up on TV. Hanni was radicalized in 2006 when her American Airlines plane sat on a Texas tarmac for nine hellish hours. Hanni started www.flyersrights.org and a campaign for laws to protect against what she considered to be "imprisonment."

The Boxer/Snowe bill promises what seem like reasonable protections for airline customers. Airlines would be required to provide passengers with food, potable water and adequate restrooms. The biggie: Airlines would give passengers the option to get off a plane that has been on the ground for more than three hours.

Industry critics claim that the bill would only make flying worse for the American public. Consultant Terry Trippler sees the bill as "a recipe for 'air rage'" that would pit passengers against each other. (Some may want the captain to taxi back to the gate; others may not want to return to the gate only to end up at the back of the line.)

"There will be no fighting," Hanni countered. Buses could service passengers who want out.

But David A. Castelveter, spokesman for the Air Transport Association, argues that it is not always safe or feasible for buses to maneuver between planes in the worst weather.

"One of these situations like what happened in Rochester is one too many," Castelveter noted. "We all know that." Flight 2816 was a "misstep," he argued, not the rule.

And: "I promise you that if a three-hour rule goes into effect, we'll be having this conversation again and talking about the unintended consequences -- greater number of cancellations, flight delays and passenger inconvenience."

Beware, Castelveter added: If the Boxer/Snowe bill passes, airlines will have an added incentive to cancel even more flights. Oh, joy. By the way, if they can blame the weather, passengers will not be compensated for hotels or meals.

He also argued that it does not make sense to promulgate regulations that restrict the decision-making of pilots and the flexibility of airports.

Hanni has done the flying public a favor by letting Big Air execs know that obscene delays will result in the sort of news coverage that is bad for business.

I had to laugh when I called her group's hot line number -- 1-877-359-3776 -- and heard the message that tells callers they can talk as long as five minutes. And frustrated fliers do, she assured me.

"People should never be forced to spend the night on the tarmac, held captive on an airplane without food, water and sufficient restrooms," quoth Boxer in a statement after the unscheduled Rochester overnight.

I feel nothing but solidarity with the passengers trapped on Flight 2816. But "held captive"? I am not sure I want to cross the country in a plane elbow to elbow with passengers who are perhaps too aware of their "rights." (I put "rights" in quotes because passengers surrender their autonomy to the crew when they board a plane.)

In an e-mail, Trippler noted that the Flight 2816 fiasco may be the straw that breaks the camel's back on the Boxer/Snowe bill. But: Just because the Senate passes a law that mandates that passengers be allowed to get off a plane, it doesn't mean that airlines can just open the doors and "do it."

If the Boxer/Snowe bill passes, the airlines will have brought it on themselves. But that doesn't mean the law will work. The Senate can pass a law that says that only a few dominoes need fall, but no piece of paper can keep the dominoes in their wake from tumbling as well.