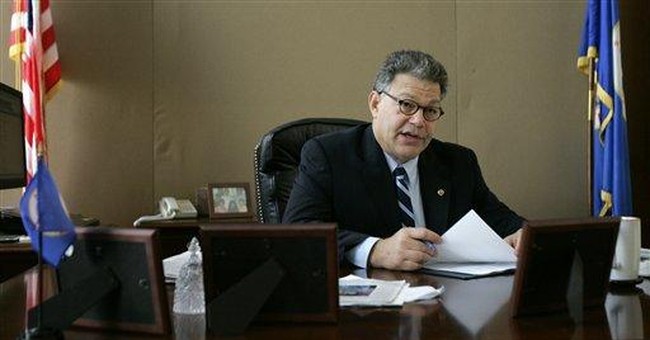 You know that American voters aren't feeling the love for ObamaCare when House members hold town-hall meetings in their districts, only to be heckled and booed.

No worries for House Speaker Nancy Pelosi, D-San Francisco. On Tuesday, she ditched the town-hall concept in favor of a friendlier closed-to-the-public "roundtable" with health care professionals and consumers at San Francisco General Hospital.

At a press conference afterward, Pelosi proclaimed that "health care is a right, not a privilege." The House health care bill, she said, would mean Americans could receive health care with no restrictions on pre-existing medical conditions, more benefits for seniors on Medicare, a yearly cap on co-payments and no cap on what providers pay.

Catherine Howard, 36, was on board. Five years ago, Howard was self-employed, uninsured and afraid that she might get wiped out financially if she was injured snowboarding. So she bought a low-premium, high-deductible insurance plan for $140 per month. "I had no way of knowing at that time what it was going to cost me," she said.

Then she got breast cancer -- and the plan that she thought would cap her co-payments at $7,500 didn't. The uncovered costs of vital treatment drove Howard close to $100,000 in debt.

While many of those at the roundtable worked in health care, none raised the question asked by CBS5 reporter Hank Plante: How much is all this going to cost?

To which Pelosi responded, "First, let's talk about the cost of doing nothing" -- that is, the anticipated rising tab for health care costs if they continue to grow at current rates.

"We can't afford not to do this," Pelosi argued. Only in Washington do people assert with a straight face that they can expand who gets covered and what everyone gets -- and it will be cheaper. And because many readers believe this fable, allow me to note that Massachusetts passed a universal plan three years ago, and already cost increases have led to cutbacks.

President Obama has said he'll pay for a health package by taxing workers who earn $250,000 or more. But there simply aren't enough rich people to bankroll all the things that Obama and Pelosi have promised, as Stanford economics professor Victor R. Fuchs noted at a Chronicle editorial board meeting Wednesday.

Fuchs has been an Obama supporter, but he would prefer to see Congress wait a year so that Washington can craft a package that would offer a basic health plan to all Americans -- paid for with a value-added tax.

The best part: This approach ends the illusion that if Uncle Sam pays for medical care, it's free. As I watched Pelosi on Tuesday, I thought: It's the California Budget Mess all over again -- with big promises of more government and more benefits and no across-the-board taxes to pay for the package. Democrats like to congratulate themselves for their noble intentions. But they have offered no plan to pay for them, and so they are bound to fail.