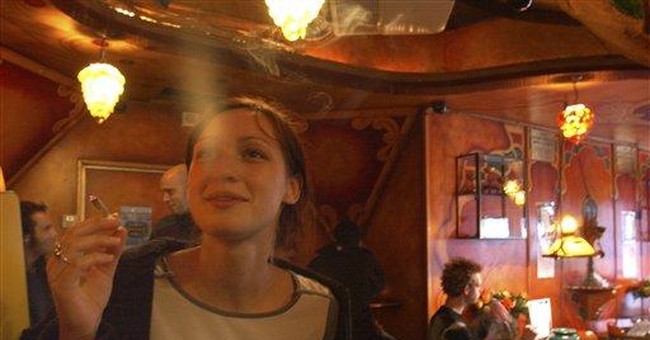 Last week saw the 75th anniversary of the repeal of Prohibition. In Washington, Law Enforcement Against Prohibition (LEAP) -- a group of former cops and drug-war veterans who have soured on America's war on drugs -- gathered to celebrate the anniversary, and to argue for an end to America's current prohibition on marijuana and more serious drugs.

Essentially, they believe that the war on drugs creates criminals. Richard Van Wickler, a one-time New Hampshire county corrections superintendent, noted during a LEAP conference call last week that despite America's drug laws, 114 million Americans (out of more than 300 million) have used illegal drugs, 35 million in the last year. The law is not much of a deterrent.

World Health Organization researchers found that 42.4 percent of Americans had tried marijuana -- the highest ratio of any of 17 countries surveyed. New Zealand, which has tough drug policies, scored a close second place at 41.9 percent. Dutch residents can buy cannabis at coffee shops, yet less than 20 percent of Dutch respondents said they had tried cannabis. Researchers concluded, "Drug use does not appear to be related to drug policy, as countries with more stringent policies (e.g., the United States) did not have lower levels of illegal drug use than countries with more liberal policies (e.g. The Netherlands.)."

Meanwhile, drug prohibition does work, Van Wickler added, as "a wonderful opportunity for organized crime." LEAP also released a paper by Harvard economist Jeffrey A. Miron, who figured that legalizing drugs could save federal, state and local governments in the United States about $44 billion per year, while taxing drugs could yield $32.7 billion annually. OK, but money is the least persuasive element in LEAP's approach. After all, the federal government could sell citizenship, set up a taxable market for selling organs or legalize prostitution to save and raise money -- while turning Main Street into a hellhole.

Whereas removing the criminal profit motive from the drug trade arguably could make America a safer, better country -- if Washington and state governments went further than decriminalizing drugs, by legalizing and regulating them, and putting drug rings out of business.

Some pro-legalization advocates argue that legalizing drugs will decrease use. I don't buy that. More likely legalizing drugs will increase usage, and that means that some teens will get sucked into a self-destructive vortex. Only a stoned person would see that as good. But it is not as if the system is without cost -- and not just the $44 billion governments spend. The black market fuels criminal gangs and crowns dangerous drug kingpins.

Eric Sterling, who founded the Criminal Justice Policy Foundation in part to atone for his role in helping Congress draft draconian federal drug laws in the 1980s, noted that the goal of those federal drug enforcers was "to raise the price of drugs and drive down the purity." The problem with that approach is that "higher prices mean that more people will enter the business." Meanwhile, marijuana today is far more potent than it was when Sterling worked for the House on drug policy.

The other downside of the system: When authorities arrest and jail low-level offenders, they are branding lowlifes with erasable criminal records.

I asked LEAP leaders if, instead of pushing for an end to the prohibition of all illegal drugs, it would make more sense to push for incremental changes -- say, legalizing marijuana, then waiting to see if the sky falls. Or doesn't. Sterling agreed that a more incremental approach seems reasonable and more likely politically: "In my own vision, it's harder to conceive of a regulatory system for cocaine and methamphetamine than it is for the others."

But if people think President-elect Barack Obama will try to end the war on drugs tout de suite , guess again. Sterling does not expect Obama to make "the political mistake Bill Clinton made with gays in the military" by pushing for change before the public demands change. Only when business groups, labor unions and others denounce the drug war as costly and feckless, and demand an end to laws that empower drug cartels, will Washington pols even consider withdrawing in the war on drugs. It is only when "those very powerful political actors speak up on this issue, then we'll see the change. And it's going to be bipartisan change."

Because there is no way to know for sure what will happen if Washington turns on the war on drugs, a go-slow approach makes sense. That said, I don't know many Americans who think that prohibition of alcohol worked -- except for organized crime.