The Hyperbole Market -- It's the Worst 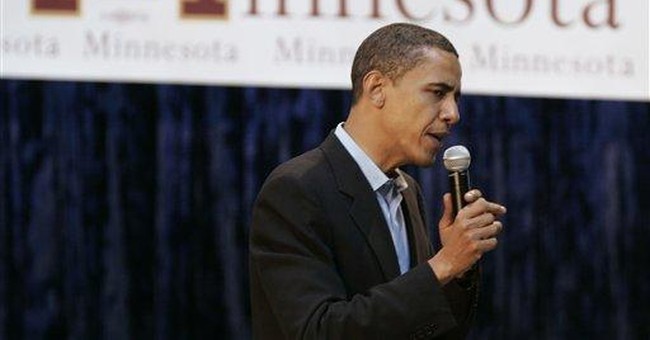 John McCain was right when he said Monday that despite the bad news about Lehman Brothers filing for bankruptcy and AIG trolling for help from Uncle Sam, "the fundamentals of our economy are strong." As politicians running for the White House learn, honesty is a commodity best used sparingly on the campaign trail. Voters apparently believe that America is in a terrible recession -- even though the gross domestic product grew at an annual rate of 3.3 percent last quarter and grew by some .09 percent in 2008's first quarter. When the public is in full panic mode, McCain could take a lesson from Barack Obama, who is running ahead of the stampede.

Remember last month when oil, having hit the price of $145 per barrel, was the issue on which the election would hinge? Forget it. Oil is now selling at below $100 per barrel, but that bit of good news is buried in the deluge of doom-and-gloom reports.

"The most serious financial crisis in generations?"

Donald Luskin, a chief investment officer with the Menlo Park investment research firm TrendMacrolytics and an economic adviser to McCain -- who tells me he has never talked to McCain -- remarked that if Obama "had a little bit more experience," he would "put these things in more context." Luskin has lived through five or six recessions, and "this ain't one."

It isn't a recession because the U.S. economy has grown in both of the last two quarters. Read: It is not receding.

And while Luskin sees the unemployment rate as "a little high," it is "not as high as it typically is in a recession." Yes, Luskin is concerned about inflation, now at 5.4 percent. The drop in oil prices may help.

Of course, it should be of concern to taxpayers that Uncle Sam has had to bail out AIG with an $85 billion loan, to shore up mortgage giants Fannie Mae and Freddie Mac and to facilitate JPMorgan's purchase of Bear Stearns to the tune of $30 billion. Also, the drop in home prices and rise in foreclosures -- thanks to rapacious lending practices -- has hit many families in their biggest asset.

Let me add, life's no picnic when you work in the shrinking newspaper industry.

The fact that the economy has grown despite all of the above -- and 9/11 and an unrelenting Democratic campaign to talk this economy down -- is proof that the fundamentals of the American economy are strong.

Luskin questioned what has happened to politics, when a candidate "must pretend this is a recession or you're seen as hard-hearted." And: "What does it say when we can't be nuanced? And we can't say, 'Look, we're in a little bit of a slowdown, but the fundamentals are strong'?"

The answer, of course, is that Democrats can't win without trashing the economy. As Luskin pointed out in a piece in Sunday's Washington Post, in Obama's famed anti-Iraq war speech back in 2002, the then-Illinois state senator suggested the war was waged "to distract us from corporate scandals and a stock market that has just gone through the worst month since the Great Depression."

In fact, the stock market had four bigger one-month drops since the Great Depression, but facts don't matter. The winning candidate in 2008 may well be the man who can say the worst things about the American economy. That's how he shows he really cares.