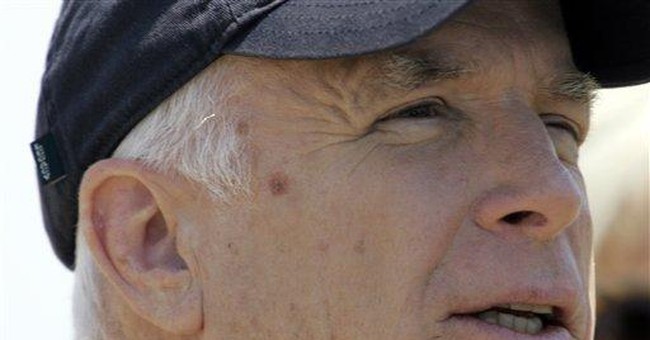 I'll say this for John McCain -- he doesn't hide behind his staff. The Republican candidate for president holds town meetings across the country and takes questions from critics and supporters alike. Regular citizens, who often depart from the news-pack question du jour, get to tell him what they think about Washington. If in reply McCain says something dicey, he can't blame his staff for filling out a questionnaire incorrectly, as Democratic candidate Barack Obama has done, because McCain said it himself.

For years, Democrats have hit President Bush for being too isolated. But as Obama campaigns Oz-like from behind a curtain of advisers, McCain mixes it up in public on a regular basis. You don't hear Democrats complaining about isolated politicians anymore.

In an interview Monday night prior to a San Francisco fundraiser, McCain challenged Obama to square off with him before The Chronicle editorial board. Having won his party's nomination -- when so many had counted him out -- by carrying his own luggage through airports and conducting more than 100 town hall meetings in New Hampshire alone, McCain relishes the debate.

McCain also clearly enjoys being a maverick, and he doesn't shrink from saying things that drive Republicans crazy. Earlier this month, former Vice President Al Gore gave a speech in which he argued that the United States could and should boost its use of solar, wind and geothermal energy so that 100 percent of American electricity is carbon-free within 10 years. It's a great idea -- if you don't know anything about energy infrastructure or economics.

To the chagrin of many Republicans, McCain responded, "If the vice president says it's doable, I believe it's doable." Do you really think that? I asked. (After all, Gore was talking up renewable energy during the whole eight years when he was vice president, and despite all the governmental subsidies and his booster talks, solar, wind and geothermal power only provide about 3 percent of America's electricity today.)

McCain's answer, "No, what I really meant was ..." And then McCain explained that he "always respected the vice president" on global warming.

But: "I don't think it's doable without nuclear power." Good point. Gore didn't mention nuclear power, even though it cleanly produces about 20 percent of U.S. electricity.

More McCain: "I didn't read all the specifics of his plan. I agree with his goal. I may disagree on all the ways of getting there. But I again want to emphasize my respect for the former vice president's leadership on this issue."

Then, just to make it clear how little McCain knew about Gore's speech, McCain said that Gore's 10-year plan was reachable with more offshore oil drilling and clean-coal technology -- precisely what Gore opposes.

And: "I am in no way trying to get in a fight with (Gore), because we share the same goal." If the goal is to be nonsensical on energy, mission accomplished.

I can see GOP readers tearing out their hair and asking why oh why McCain can take on Obama for opposing offshore oil drilling despite gasoline now costing more than $4 per gallon, but not Gore.

But maybe there is a method to McCain's madness. With the USA Today/Gallup poll showing 65 percent of Americans disapproving of President Bush, McCain is within three points -- read: the margin of error -- of Obama in the RealClearPolitics national poll average.

Voters seem to be looking for a president who is more interested in getting things done than scoring partisan points and being deliberately confrontational. Perhaps McCain can be more effective in taking on House Speaker Nancy Pelosi for barring any House vote on offshore oil drilling.

"I respect her position," McCain said, but then he slammed Pelosi for her decision "to not even allow votes." If elected, McCain said, he would sit down with Pelosi to talk energy.