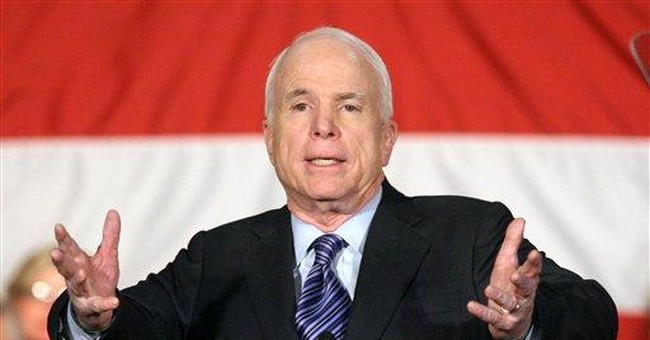 "We can't drill our way out of the problem." Democratic presidential candidate Barack Obama has said it. Senate Majority Leader Harry Reid has said it. It's one of those bromides sincerely repeated by Democrats with such conviction that for years left-leaning audiences duly nodded their heads, never questioning whether the truism was indeed true. Until gasoline leaped above the $4-a-gallon mark.

Even Republican presidential candidate John McCain has seen the light. A longtime opponent of drilling off the coasts of California and Florida, as well as in the Arctic National Wildlife Refuge, McCain has come out in favor of lifting the oil-exploration ban off the coasts.

Economic adviser Douglas Holtz-Eakin told the New York Times that McCain had supported the drilling moratorium until 2006, when Washington and Gulf Coast states reached a compromise that permitted some offshore oil-and-gas exploration.

I don't care how McTeam tries to package it, McCain has flip-flopped on offshore drilling -- and it's about time.

For too long, McCain talked like a Democrat. He was in favor of greater energy independence, of reductions in greenhouse gas emissions and of no new drilling off the coasts or in ANWR -- and cheap gasoline. To believe all that is possible in this global market, you essentially have to believe in a good energy fairy.

When gas prices exceeded $4 per gallon, McCain, like many taxpayers, hit the tipping point where he could no longer afford the romanticized view that oil should only be pumped from yucky places. So he began to talk about Washington offering financial incentives to get coastal states to agree to new offshore exploration.

Why does McCain believe in states' rights for Californians and Floridians, but not Alaskans, who support drilling in ANWR? I asked Holtz-Eakin. His answer: Some places are simply too "special."

Wednesday, Gov. Arnold Schwarzenegger released a statement that reaffirmed, "I do not support lifting this moratorium on new oil drilling off our coast." Be it noted that Schwarzenegger agreed to increasing Indian gaming, and now wants to pump up the lottery to raise needed money for state coffers -- but he won't dirty his hands with offshore oil. Gambling is one thing, but producing more of a commodity used by all is beyond the pale.

Barack Obama is stuck with the Democrats' energy policy -- which is denial of reality. Global demand for energy is up. It's not going to go down in the next 10 years. What more do you need to know?

Yet the Democrats continue to talk as if we cannot touch our own oil reserves, and still not pay higher prices at the pump.

Obama told reporters that offshore drilling wouldn't bring relief to consumers for five years -- other Democrats say 10 years -- at the soonest. He also touts the $150 billion he wants to spend over 10 years on the "green energy sector" -- that money won't provide instant results, either.

Rayola Dougher, an economic analyst for the American Petroleum Institute, estimated that there are 1 million to 2 million barrels of oil per day that could be drilled in now-restricted coastal areas -- "that's 10-20 percent of what we're importing." That oil could be on the market in as soon as five years.

"Now that their opposition has helped drive gas prices to record levels," Bush said of the Democrats Wednesday, "I ask them to reconsider their positions." Americans may have been willing to live in oil la-la land and oppose new drilling offshore or in Alaska when they thought a moratorium wouldn't cost them. Now they know better.