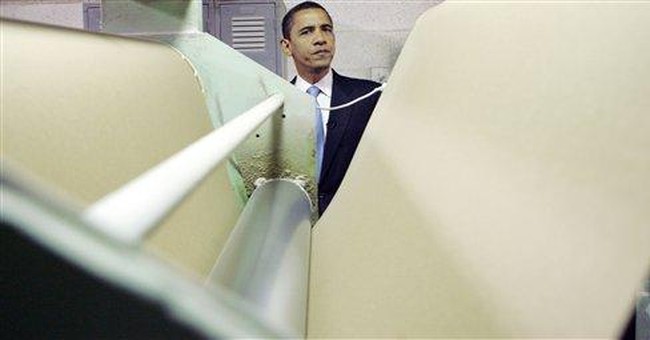 The latest silly story in the campaign scrum involves a photo of Democratic presidential candidate Sen. Barack Obama in Somali garb -- a photo apparently distributed by opponent Sen. Hillary Rodham Clinton's campaign. No doubt, people who consider themselves far more thoughtful than the average news consumer regard such stories with a shudder as they pronounce with much self-satisfaction that the cheesy media should concentrate on comparing the health care proposals of the candidates.

Don't expect such high-mindedness here. This episode tells Americans a lot about two people who would be president, who essentially agree on major political issues but have drastically different ways of getting what they want. Their approach is important because the American people may be married for four or eight years to the tone a President Obama or a President Clinton set.

Besides, this story has pictures. The spat started after Clinton berated Obama for distorting her position on NAFTA. How is it even possible to distort Clinton's position on NAFTA? Now Clinton says she wants a trade-agreement timeout. But it's hard to trust what she says on NAFTA. After championing the measure among Democrats, President Bill Clinton signed NAFTA into law during years that are included in Hillary Clinton's much-touted 35 years of experience. As the New York Times reported, Hillary Clinton now says the trade agreement "was negotiated" under the George H.W. Bush administration -- airbrushing out the Clinton signature.

So it's hard to see how Team Obama could distort her distorted position. Saturday, Clinton denounced Obama's "tactics" and "behavior in this campaign" for releasing campaign material that charged her with supporting NAFTA. "Shame on you," quoth Clinton.

Monday, the Obama-with-a-turban photo surfaced online on the Drudge Report. Matt Drudge credited Camp Clinton. Camp Clinton denied distributing the photo. Obama campaign manager David Plouffe told Politico.com that the photo represented "shameful offensive fear-mongering." Clintonista Maggie Williams riposted, by releasing this statement: "If Barack Obama's campaign wants to suggest that a photo of him wearing traditional Somali clothing is divisive, they should be ashamed. Hillary Clinton has worn the traditional clothing of countries she has visited and had those photos published widely.

"This is nothing more than an obvious and transparent attempt to distract from the serious issues confronting our country today and to attempt to create the very divisions they claim to decry."

I want to credit Democrats for being consistent. For years they've been the overly sensitive party -- quick to see any treatment that singles out a Democrat as sexist or racist. Pundits made much ado when Hillary got teary-eyed in New Hampshire? Sexism. Voters demand that the federal government enforce immigration laws? Racism. The media scrutinize Clinton's record more than Obama's record? Sexism.

(Obama refers to Republican presidential candidate Sen. John McCain's "half century of service to this country." Age-ism. Oops. Take that back. The Republican can't be a victim.)

Hillary Clinton has made a career out of being a victim and her staffers have honed playing the victim card. That's why you see articles about whether the media are tolerant of sexism, but not racism.

I have to figure that Clintonia is rolling the dice. Her campaign is flailing. Being nice didn't bump Clinton's numbers. Along comes a photo that is just a photo of Obama visiting Africa and dressing like the locals, as both tourists and politicians are wont to do. And also a reminder that Obama might seem too exotic to some voters. It's the wordless way of whispering: Is America ready for a black president?

The real question is: Does America want four years of a shameless victim in chief?