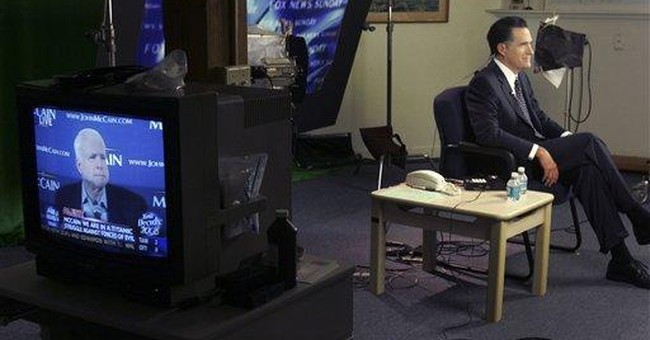 Former Massachusetts Gov. Mitt Romney likes to tell Republican voters that he is the true conservative because, unlike Sen. John McCain, he has not been "part of the Washington scene for a quarter of a century."

Yes, McCain has been in Congress since first elected in 1982, but he never succumbed to the Beltway Culture of Spending, whereas Romney fell into Washington's big spending trap somewhere between Michigan and Florida.

As Romney courted the Michigan vote, he proposed a $20 billion energy research/auto industry bailout plan likely to appeal to the Motor City state. Later, touting himself as the turnaround guy for a flailing economy, Romney released his own $233 billion stimulus package -- a price tag that dwarfs President Bush's $145 billion proposal.

In the package, Romney cooked up a pricey way to court Florida's powerful senior vote: He proposed a permanent elimination of payroll taxes on seniors. And he opposed "any increase in Social Security taxes."

The man who says he is not a creature of Washington presented no spending cuts in the stimulus package. Romney spokesperson Sarah Pompei said that the price tag is big because it needs to be "large enough and immediate enough to have an impact to help turn around the economy." And while there are no specific spending cuts, in general Romney wants "to cut wasteful spending in Washington." Forget that without spending cuts, Plan Romney can only further expand the federal budget deficit.

We've seen that movie before. It's called Politics as Usual.

I understand Romney's appeal to GOP voters. During debates, he usually delivers the best line and demonstrates a command of every issue. Pundits like to talk about how he looks like a president. More important, he sounds like a president.

Romney's work to restore confidence to the scandal-plagued 2002 Salt Lake City Olympics shows that his take-charge attitude can lead to success. Also, Republicans like a candidate with real-world business experience.

But don't tell me Romney is the true conservative in the race. His record reveals a solid conservative -- when it has been in his interest to be one.

In 1994, when he was running to unseat Democratic Sen. Ted Kennedy, Romney supported abortion rights, distanced himself from Ronald Reagan and courted the gay and lesbian vote. While he opposed same-sex marriage, Romney convinced the largest gay GOP organization, the Log Cabin Republicans, that he could support civil unions -- and won their unanimous endorsement when he ran for governor of Massachusetts in 2002.

Before his first -- and only -- term as governor was over, Romney had flipped completely. When Romney came out against civil unions, Log Cabin Republicans felt betrayed. "He shakes your hand, looks you in the eye," Log Cabin member Richard Babson later told the Washington Post. "It's hard for me to know what Mitt Romney's first principles are on a given day."

Romney had liberal/moderate Republican positions when running for Massachusetts office, then far-right positions when they could help him win the GOP nod for the White House. And somehow he feels no hesitation in framing himself as the true conservative. Yes, thinking people's positions evolve, but Romney's evolutions have been too fast and too convenient.

Perhaps that's why New Hampshire voters did not turn out for the former governor next door.