Dean Reuter
|
Posted: Oct 22, 2019 12:00 PM
Share   Tweet
The opinions expressed by columnists are their own and do not necessarily represent the views of Townhall.com. 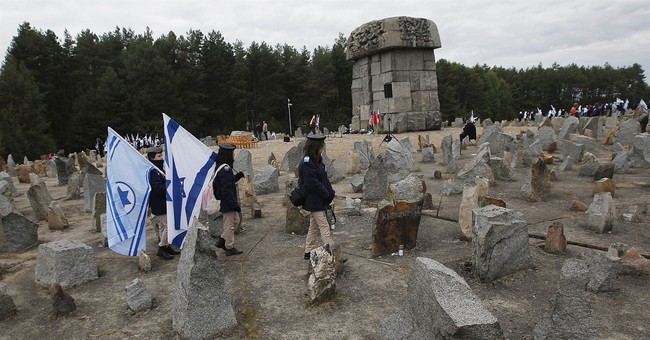 How can the story of one of the most evil, most powerful Nazis only now be coming to light? His colleagues, insiders in one of history’s most abhorrent regimes, described SS General Hans Kammler’s “brutality” and called him “the worst man I’ve ever known”—remarkable statements from men accustomed to dealing with mass murders and institutionalized genocide. The new book The Hidden Nazi: The Untold Story of America’s Deal with the Devil, lays out the case that Hans Kammler was truly the worst of the worst.

As a trained architect and engineer, he selected sites and laid out the plans for the Nazi concentration camps, creating in his own handwriting the blueprints for the standard camp barracks—including at Auschwitz. As the Holocaust took shape, he signed the orders to build the gas chambers and ovens that killed millions of men, women and children. Not just a paper-pusher, Kammler was a hands-on manager, visiting the camps regularly, barking orders, demanding changes, even firing his pistol into the air to startle workers and subordinates into greater production.

Kammler next turned his efforts to administering Germany’s slave labor trade—taking the most able of the prisoners and renting them out the German government and German industry, establishing a revenue stream for his beloved SS. Kammler’s slaves were worked to death, intentionally ground to dust.

As the Germans saw they were losing the war, the Nazis needed a miracle. They placed their bet on the Wonder Weapons. Hinted at in speeches by Hitler and Goering, the Wonder Weapons were a mysterious collections of arms not yet tried on the field of battle. Chief among them was the liquid-fueled supersonic V-2 rocket, which was supposed to be Germany’s salvation. After its first successful test flight, which took place on Germany’s Baltic coast 77 years ago this week, Kammler seized control of the rocket program and ultimately oversaw continued research, mass production, and even firing in the field. You will search in vain for anyone who had an equivalent authority over the design, building, and use in battle of any complicated weapons system, in any country of the world, in any era of history—a stunning wingspan of authority.

But with his insider information, Kammler knew that even with the V-2 the war was lost. So in December 1944, he began planning his exit strategy. Ultimately, this monster cut a deal with the Americans to deliver Germany’s rocket team and save his own hide. A month after the handshake, he moved his rocket team to central Germany to prevent them falling into the hands of the Russians. A further month later, at the Yalta conference, the Allies decided that part of Germany would be within the Russian post-war zone of occupation. Not to be thwarted, Kammler moved the rocket team yet again, this time dispatching his personal train, and placed them within a few days’ march of the advancing American Army.

In the closing days of the war, Kammler took himself to Prague, we believe to collect more scientists and researchers from the super-secret Skoda munitions projects he oversaw.  In the very final spasms of the war, according to his driver, a despondent Kammler walked into the woods and shot himself. No one pursued him, and he was forgotten by history and the Nazi hunters alike.

That never made sense to me and my co-authors; Kammler would never give up, and never give in. Through years of research we unearthed documents from around the world revealing the stranger-than-fiction truth about Kammler. He did not die at the end of the war. All documents point to him having concluded his deal with the Americans and gotten aid in escaping justice. But our story is even broader than this astounding “Kammler Deal.” We’ve also unearthed new evidence about previously unknown nuclear research being conducted by Germany, troubling information about German-American rocket hero Wernher von Braun, and an astounding Amerika Rocket capable of reaching the Eastern seaboard of the United States, putting Washington, New York City, Boston and Philadelphia all within reach of Germany’s chemical, biological, and nuclear dirty bombs.

The Hidden Nazi, reads like fiction but it is a well-researched, thoroughly-documented deep dive into one of the darkest eras in human history, changing what we thought we knew about WWII.

Dean Reuter is the principal author of The Hidden Nazi: The Untold Story of America’s Deal with the Devil (October 8, 2019, Regnery History), and co-editor and author of Liberty’s Nemesis, and Confronting Terror.