Puerto Rico Plays A Dangerous Game of Cat and Mouse

David Williams
|
Posted: Feb 08, 2018 12:01 AM
Share   Tweet
The opinions expressed by columnists are their own and do not necessarily represent the views of Townhall.com. 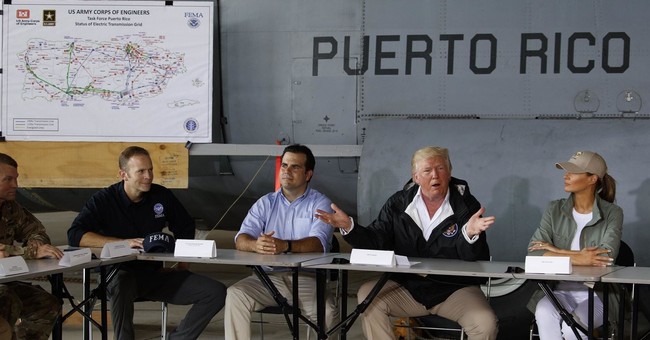 Puerto Rico Governor Ricardo Rosselló has long blamed his predecessors and those in Washington – namely Republicans including Sen. Marco Rubio (R-Fla.) – for his woes.

Rosselló has called the ground-breaking Tax Cuts and Jobs Act a setback for the island.  The governor has also criticized the U.S. Army Corps of Engineers, despite their efforts to rebuild the power utility long-neglected by a long line of Puerto Rico leaders.

While many things about Puerto Rico’s governance remain opaque, one thing is quite clear: Gov. Rosselló will stop at nothing to blame everyone else for his own failings. By blaming others and feigning helplessness in the face of challenge after challenge, Gov. Rosselló hopes to secure a heavily subsidized or free loan via the Trump Administration.

Worse still, it appears that the island’s leaders are jeopardizing the safety of citizens to force Washington’s hand in doling out subsidized federal loans. Last week, Gov. Rosselló ordered the shutdown of a few of its electricity plants, supposedly as a last ditch cost-saving measure.

The governor ordered this shutdown even though as of January 24, four months after the Hurricane, nearly 20 percent of the population still has no electricity. With no electricity, many elderly and sick Puerto Ricans must make do with nonfunctioning breathing machines and improperly refrigerated medication.

Why then, would Governor Rosselló shut down Puerto Rico Electric Power Authority (PREPA) electricity producing units when its people have been suffering for 127 days without electricity?

It is simple. The Puerto Rican government believes that by shutting down a few electric plants and claiming a lack of “liquidity,” the federal government will be forced to give the Commonwealth central government billions of dollars in Community Disaster Loans (CDL). A press release by Gov. Rosselló confirmed that goal when he said that the closing down of the plants “raises the flag about the necessity of the public corporation to have access, as soon as possible, to the loans we have proposed.”

In a letter to Office of Management and Budget (OMB) Director Mick Mulvaney, and other senior White House officials, the Taxpayers Protection Alliance (TPA) expressed deep concern over these CDLs and urged greater transparency and direct oversight.

TPA called for a “complete and full disclosure” of the Commonwealth’s (and its public corporation’s) finances, and requested that it’s finances be published on the OMB website before any loan is awarded.  This is necessary to protect U.S. taxpayers, as the Commonwealth’s strategy to empty the General Fund in order to qualify for the CDL loans under the FEMA/U.S. Treasury Cash Balance Policy agreement appears to be in full swing.  As part of this strategy, Gov. Rosselló and the Oversight Board have thrown cold water on short-term private sector financing to support the electric utility offered up in court.  In doing so, Gov. Rosselló and the Oversight Board are trying to force the Trump Administration into providing the Commonwealth – not the instrumentalities that really need help – with a multi-billion dollar subsidized loan.

What’s remarkable about the Commonwealth’s claim to be broke is that the plethora of proof and evidence to the contrary. In late December, the Governor was forced to admit he was hiding $6.8 billion in more than 800 different bank accounts from creditors and other stakeholders.  Further leaked documents from San Juan reveal that the Oversight Board – hand-picked by President Obama – knew about the secret accounts since July 2017 and did nothing.

All of this confirms what has been believed for a long time: That financial transparency has been severely lacking in Puerto Rico for decades and the installation of the Oversight Board or once fresh-faced Gov. Rosselló hasn’t changed things one bit in Puerto Rico.

Even Sen. Rubio, an outspoken supporter of Puerto Rico and an advocate for federal loans, sent a letter to Governor Rosselló asking him to clear up the confusion surrounding the government’s finances. Similarly, House Natural Resources Committee Chairman Rob Bishop (R-Utah) stated that the recovery of the island “cannot be done behind closed doors,” and urged the Oversight Board and Gov. Rosselló to include creditors into the development of future plans to guarantee accuracy and transparency.

One may wonder where the Oversight Board has been throughout much of this action.  They simply cannot sit by and think they don’t share in the blame for the island’s morally objectionable actions to obscure their financial situation. After all, they were appointed to restore fiscal responsibility and access to capital markets.  Now, they seem to be sitting on their hands, complicit in Gov. Rosselló’s games.

It is important to ensure that the ideals of transparency, honesty and fiscal responsibility are respected.  The Puerto Rican government cannot be allowed to jeopardize the safety of its citizens and use them as pawns in their search for unwarranted government loans.