The Day Nixon Told the Truth 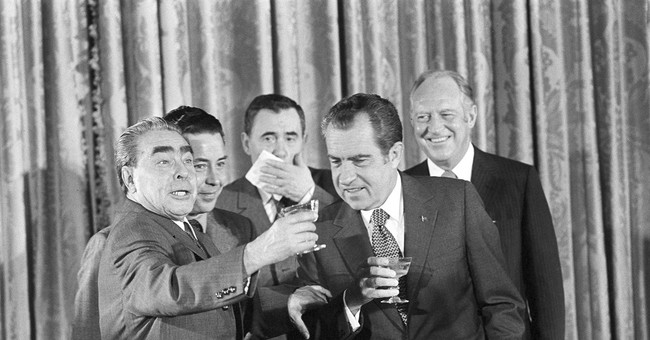 During his farewell remarks in the White House East Room on August 9, 1974, President Richard Milhous Nixon told the truth.

Nixon remains a controversial and tarnished historical figure. But his impact on America was significant. Only Franklin Roosevelt’s name appeared on as many national ballots (five). His presidency, though now remembered by many for the way it ended, was actually filled with great achievement and success in many ways. Nixon was a brilliant visionary.

But he also had a weakness.

It was a failure to tell the truth that became Nixon’s undoing. The highly publicized tapes of what he thought would remain private conversations revealed that shortcoming. Nixon really did have enemies, but he later acknowledged that he was the one who gave them the sword to use with relish.

Forty years ago this weekend, I was a few days away from beginning my first year of college and was finishing up a summer job at a Taylor, Michigan menswear store. I asked my boss if I could leave a bit early on August 8th, and he asked me why. I told him that I wanted to watch the President’s speech. I made it home just as the living room clock chimed nine times. The image of President Nixon came on the screen, and he began: “Good evening. This is the 37th time I have spoken to you from this office.”

My mother was crying. Mom and Dad were Nixon people since voting for him when he was Vice President under Eisenhower. I was an “Alex P. Keaton” type of kid who often defended Nixon to my high school teachers. Fortunately for me, the summer of 1974 began and school was out by the time I finally realized that Watergate indeed involved Nixon, saving me from a litany of condescending voices saying, “I told you so.”

However my interest in Nixon, his work and legacy, did not end when he waved, flashed a victory sign, and got into Marine One on the White House lawn. I wrote about him in graduate school, and years later had the privilege of writing some for his library in Yorba Linda, as well as doing some of the voice-over work that continues to be used in a few exhibits there.

As we note the 40th anniversary of Nixon’s resignation, I think it’s what the man said to his staff and other assembled guests that continues to resonate with me. It was an unusual address for someone who was a master at extemporaneous speaking.

Among the gifts and passions possessed by the 37th President of the United States was a love for the English language. He was a wordsmith and actually quite good at it, in spite of the fact that his White House staff included a stable of excellent speechwriters. Not since Woodrow Wilson had a president been so involved in writing his own speeches. And Nixon never used a teleprompter.

When Nixon spoke that Friday morning, just after signing his resignation letter for Secretary of State Henry Kissinger, there were about 300 people in the East Room. I watched it on television, along with millions of others.

His remarks were at times rambling and mawkish. His tone wasn’t defiant like when speaking in 1962 after losing the race for Governor in California, when he talked about not having him to “kick around” anymore. But it was somewhat painful to watch.

After talking about mountains, valleys, young people, his “Old Man,” and his saintly mother, Mr. Nixon shared words that are worth remembering no matter what our lot in life. They were likely among the most self-aware words Nixon ever uttered in public:

“Remember, always give your best. Never get discouraged. Never be petty. Always remember, others may hate you. But those who hate you don't win unless you hate them. And then you destroy yourself.” [Emphasis added]

In a very real sense, Richard Nixon explained Watergate in that moment. He was a man with the capacity for greatness, one of the smartest men ever to hold the nation’s highest office. But he wrestled with a very common problem: Unresolved anger.

I could be wrong, but I wonder if that day, as Nixon was talking about his Quaker mother, he wasn’t remembering something she had most certainly taught her gifted son. It was what Jesus said, “But I say unto you, Love your enemies, bless them that curse you, do good to them that hate you, and pray for them which despitefully use you, and persecute you.” [Matthew 5:44].