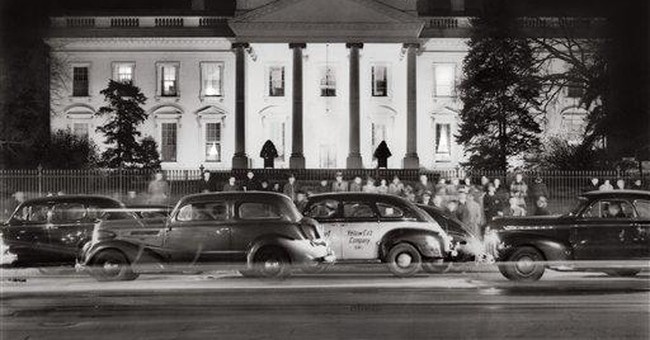 Mark Twain often suggested that history doesn’t always repeat itself, “but it does rhyme.” This chronological cadence is particularly true when you note some of the key events in the past century that happened in early November.

November 7, 1917 was when the Bolsheviks seized power in Russia, unleashing a still too-often ignored and dismissed era of tyranny and terror (the idea of an “October Revolution” has to do with the difference between the Julian and Gregorian calendars). Long since discredited by the verdict of history, the ideas that formed the basis of what Ronald Reagan aptly called an “evil empire,” have found new adherents – some in high places in our land. But ignorant neo-Marxists in our midst notwithstanding, the reality of what took place under the czars-of-all-things-Soviet for more than seven decades was horrifying.

Much is rightly made of the atrocities committed by the Nazis in Germany and we are regularly reminded that we must never forget. I agree. But while remembering all the depravity wrought by Hitler and his henchman, why do Communist leaders and regimes so often get a pass these days? Even by conservative accounts, more than 100 million people died via Communist oppression. Yet some apparently feel that the ideas behind the system are somehow still valid. Really?

Fast forward to November 4, 1956, and see Soviet tanks penetrating the Pest side of the Danube in Budapest, Hungary, in their offensive to put down a nationwide revolt against the so-called Peoples Republic of Hungary. Brave patriots sought to wrest control of their nation from the grip of Soviet-style Stalinism.

Meanwhile, America stood sadly down. The great General, who had led the allies to victory 11 years before, sent mixed signals. Freedom fighters were emboldened by what we were saying on Radio Free Europe, but the official policy turned out to be nothing more than impotent ambivalence. Within days, the courageous movement was crushed.

Speaking of the 4th day in November and presidential impotence, let us now move ahead to the year 1979 – the moment Iranian “revolutionaries” seized control of our embassy in Tehran, initiating a 444-day Hell for 52 American hostages. This was the moment when many average Americans first came face to face with the ugly egregiousness of Islamism. Jimmy Carter lived at 1600 Pennsylvania Avenue in those days, but his presidency would languish due to lack of foresight, insufficient resolve, and malaise-driven methodology.

Exactly one year later – yep, you got it – right smack dab on November 4, 1980, Ronald Wilson Reagan trounced Mr. Carter, who vainly sought re-election, with the networks calling the race even before many Americans had voted. The hostages would thereafter celebrate the very moment of Reagan’s inauguration the following January 20th as their moment of liberation. Clearly, the nuts running the show in Tehran had the requisite lucidity to know that they did not want to deal with the Gipper.

Another November 4th, this one in 1989, saw a crowd of nearly 1,000,000 people cram Alexanderplatz in East Berlin, rallying for freedom. This would lead in less than a week to something for many years thought to be unthinkable – the crumbling of the Berlin Wall. A little more than two years earlier, that same Ronald Reagan had challenged his Soviet counterpart-though-no-real-match, Mikhail Gorbachev, to “tear down this wall.” Those words penetrated hearts, minds, not to mention concrete that day, leading to the barrier’s ultimate demise as a metaphor.

Eventually, we came to yet another November 4th – this one in 2008, with Barack Obama’s election as U.S. President, an event that to many heralded a whole new world to come. But the “change we can believe” soon began to appear more and more like an awkward combination of antiquated socialism and naïve geopolitics. Frank Gaffney, president of The Center for Security Policy in Washington, suggests that the “Obama Doctrine” can be summed up in nine words: “Undermine our allies. Embolden our enemies. Diminish our country.”

You see, the toxins of Lenin’s bunch in 1917, and those of the gang in Tehran in 1980, share common and deadly DNA. To miss this leads to the very real potential for unparalleled peril.

Once we had leaders who instinctively understood the danger of sinister ideology. Now, all evidence seems to indicate that people in key roles overestimate Marxism and underestimate Islamism. The welfare state, once nearly dismantled after we had apparently learned its dark lessons, is now expanding exponentially once again with a vengeance. Our government preaches stimulation, but practices hegemony. Mr. Reagan always reminded us about the virtue of creating wealth. Mr. Obama seems dead set on redistributing it.

And this Monday, November 9th, on the 20th anniversary of the day Reagan’s instruction about that wicked wall was enthusiastically followed by a Berlin crowd, our new president will be a no-show. He has nothing against speeches in Berlin. Been there; done that. It’s not the venue that makes him uncomfortable. It’s the message.

When the wall came tumbling down, it was the most dramatic demonstration of the inherent bankruptcy of the ideas of Marx in actual practice. Sure, the doctrine promises hope, change, and the idea that human self-interest will one day “wither away,” but it has never really delivered – simply because it can’t. Harvard professor Richard Pipes has suggested the Soviet system collapsed because of “the utopian nature of its objectives.”

And when it comes to Islamism, the continued and persistent minimizing of its threat is not only misguided, it approaches political malpractice. The president, this past November 4th, reached out to Tehran seeking “a relationship with the Islamic Republic of Iran based on mutual interests and mutual respect.” In response, leaders there vow to continue to show “unquenchable anger against the Great Satan.”

That, by the way, is how a clenched fist responds to an extended hand.

So here we are in another November in time and a 39-year old Army major – a psychiatrist and lifelong Muslim – climbs onto a table crying, “Allahu Akbar,” and opens fire on fellow-soldiers. Many die, while others cling to life. But will anything be learned?

It seems that the history of the past 100 years has been, in many ways, a battle of Novembers. At times, tyranny has temporarily triumphed; at other times freedom’s flag has flown. Yes, Mark Twain said that history could rhyme. But often these rhymes – so simple and clear - come across as riddles to those who are apparently determined to miss the obvious.