The Folly of Blind Compassion 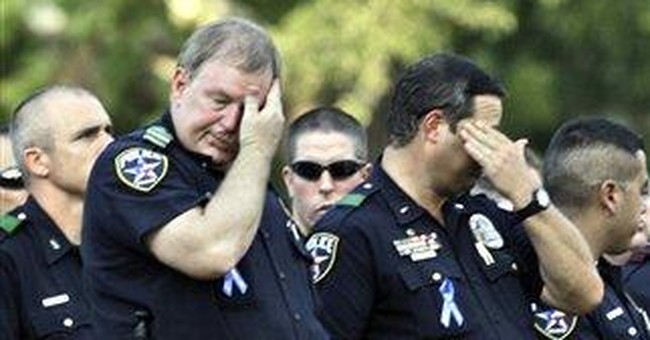 Leon was a short, thin, 28-year old man. A self-described anarchist – a term that would translate today as terrorist – he determined to commit an act of murder. His target was the President of the United States.

Almost 100 years to the day before the 21st century faced the murderous terror of Sept. 11, 2001, Leon F. Czolgosz (pronounced: “Cholgosh”) waited his turn in a receiving line at the Temple of Music, part of the Pan-American Exhibition in Buffalo, New York. Everyone wanted to shake the hand of President William McKinley who had presided over a national economic recovery via a sturdy conservative approach.

A secret service agent locked eyes with Czolgosz briefly, but seeing nothing out of the ordinary he didn’t linger. Too bad, because when Leon found himself face to face with the president, McKinley reached out his right hand, which the would-be assassin batted away while bringing his own handkerchief-draped right hand up toward McKinley’s abdomen. He fired two shots from the .32 caliber Iver-Johnson "Safety Automatic" revolver he had purchased just two days before for $4.50.

President McKinley at first seemed to defy the assassin by appearing to survive, only to succumb to his wounds eight days following the shooting. The 25th President of the United States died on September 14, 1901. Czolgosz was swiftly arraigned and indicted. He was brought to trial on September 23rd – a proceeding that lasted a little more than eight hours from start to finish. Found guilty by a jury, he was sentenced to death by Judge Truman C. White three days later. There is some dispute as to whether or not the jurist added the perfunctory “May God have mercy on your soul” addendum.

That very day, as the nation’s newspapers carried news about the death penalty sentence for the presidential assassin, newsreels were released showing McKinley’s Canton, Ohio burial. It was all very real and very fresh in the minds of Americans.

Sometimes a rush to judgment is better than deferred injustice born of misguided compassion.

Czolgosz was the 50th criminal to sit in New York’s electric chair, doing so on October 29, 1901 – less than two months after his sordid act. His brother witnessed the execution and asked for the body – presumably on “compassionate grounds” – but was denied. As Leon Czolgosz was buried, jailers at the Auburn, New York facility poured liberal amounts of sulfuric acid on the body. The remains diffused into the prison-ground soil.

Sure there were some at the time who protested all of this, even suggesting that Czolgosz was a victim of social conditions. But empathy wasn’t the big debate-ending trump card back then. Even the new president, Theodore Roosevelt – a man who was actually known for his progressive leanings – denounced anarchism as “evil.” In his first message to Congress he described the anarchist as “a malefactor and nothing else. He is in no sense, in no shape or way, a ‘product of social conditions.’” He added that it was “no more an expression of ‘social discontent’ than picking pockets or wife-beating.”

Fast forward to our day and age and the ghastly sight of Abdelbeset Ali Mohmed al Megrahi being freed from prison in Scotland, with Scottish Justice Secretary Kenny MacAskill citing compassionate grounds for the release and saying al Megrahi was "going home to die." Never mind that the terrorist is responsible for the death of 270 people who died when the bomb he placed on Pan Am flight 103 exploded earlier than he planned over Lockerbie, Scotland in December of 1988.

Time may heal some wounds, but it also tends to play tricks on memory and good judgment. Blind justice is one thing; willfully blind compassion is quite another. Where is the compassion for the victims and their families in this matter?

We are witnessing the fruit – an extreme example, I know, but an example nonetheless – of what happens when empathy becomes a serious factor in the pursuit and practice of justice. Compassion that becomes myopic and gets lost in the distortions and nuances of the small, subjective picture, will not result in justice, but instead will often fly in it’s very face.

This so-called compassionate act by the Scottish government is very much an in-your-face offense against the families of those who died on that fateful flight, as well as the world at large. The man who was set free the other day had already received a boatload of compassion in the fact that there was no death penalty in the system where he was tried and convicted for his horrific deed.

The difference between the two scenarios I have written about here is time. When a wound is fresh, when an injustice or evil deed is recent, there is reactive vigilance. But as time goes on and life defaults to a measure of normality, issues become blurred and memories become faulty. Things cease to be as clear-cut.

So we find ourselves at a moment, when our nation is outraged – appropriately so – at the release of a terrorist, while at the same time we are moving away from any semblance of actual vigilance at breakneck speed.

Why should some in our government denounce the action of the Scots, when in a real sense they are declaring at nearly every turn that there is no war on terror, no war against jihad, and that we are in a narrow conflict with one small group of rascals. I find the finger pointing at Scotland by some of those in our midst who want to make life easier for the bad guys to be blatant hypocrisy and mere political expedience.

Frankly, what Scotland has done, as objectionable as it is – as unthinkable as it seems - is the fruit of the kind of thinking that demonizes Gitmo and suggests that we are not at war with a murderous ideology. Even though that ideology is, in fact, very much at war with us. Liberal notions in our nation about justice for those poor misunderstood Islamists are ascendant in our culture these days. How are they really any different from the mindset in Scotland?

In the 1957 film classic, Bridge On The River Kwai, the brilliant actor Alec Guinness plays a Colonel by the name of Nicholson. The Colonel eventually becomes preoccupied with the successful building of the bridge, at the expense of his better judgment and soldierly loyalty. He develops rapport with the enemy – rapport that clouds his better judgment.

In the end, he comes to his senses, uttering “what have I done?” and blows up the bridge he labored so diligently to create.

It seems that some in our national leadership today have allowed time and other considerations to dull their senses about danger and real threat. And they have been spending more time building a bridge – one that will be used with relish by our enemies when the time comes – than they have creating and maintaining our vigilance against a powerful and persistent enemy.

One would hope that seeing Abdelbeset Ali Mohmed al Megrahi climb the stairs Colonel Gaddafi’s airplane recently, en route to a hero’s welcome in Libya, would be enough to bring some of our leaders to a Alec Guiness-like “what have I done?” moment.

But I suspect it will take many more examples of jihadist hubris and western civilization’s gullibility to bring any possible change about. Of course, by then the bridge of peace and friendship we have been building to span the chasm between us and the Islamists will be under the enemy’s complete control.