Forget Taxes - What About Death? 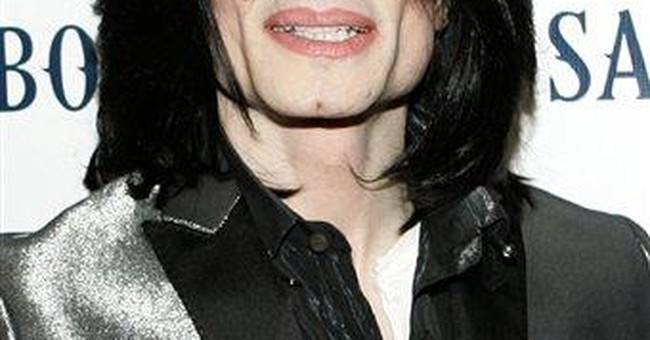 Daniel Defoe, early eighteenth century novelist (Robinson Crusoe), pamphleteer, and part-time spy, is usually credited with the first use of some form of the phrase about the certainty of both death and taxes. Benjamin Franklin borrowed from Defoe and refined it: "In this world nothing can be said to be certain, except death and taxes." And, in Gone With The Wind, Margaret Mitchell included a play on the now famous maxim: "Death, taxes and childbirth! There's never any convenient time for any of them."

Columns such as mine talk a lot these days about taxes – maybe too much. But we certainly don’t talk enough about death, except when someone famous or beloved, sometimes both, passes on.

How many times have you heard the idea that bad things come in “threes?” Well, Ed McMahon passed the other day; so did Farrah Fawcett, now comes the death of pop icon Michael Jackson. The first two events seemed to be sadly imminent for sometime, one because of chronic health issues due to age, the other because of a battle – valiantly fought – with cancer. Mr. McMahon was 86, the former Charlie’s Angel was 62; Michael was 50.

There was Stephen Johns, the kind and generous security guard who opened a door at the Holocaust Museum recently, only to be gunned down by a hateful excuse of a man. And just the other day, a memorial service was held here in the Washington, D.C. area for Jeanice McMillan, the Metro train operator who perished after gallantly trying to stop her train from crashing into another. By all accounts, the lady was a hero. Then, of course, there are the eight others who died in that rail tragedy. Among them, Retired Major General, David Wherley, former commander of the D.C. Army and Air National Guard, and his wife, Ann, along with LaVonda King, a 23-year old mom on her way to pick up her two boys from daycare.

Of course, any morning newspaper is filled with death notices, names that mean something to relatively few as compared to what happens when someone famous dies. So, why is it that we find ourselves moved – even a little emotional – when we hear of the passing of someone we only knew from afar? Is it just because of the whole overdone 24/7 news coverage, looping stuff over and over and talking ad infinitum about a person?

I actually think something else is at play. Something deeper. Something instinctive. Something that is directly tied to how we are all wired.

Centuries ago, a king whose name is synonymous with wisdom, but who actually did a lot of dumb things – that being another story – reflected:

“Better to spend your time at funerals than at parties. After all, everyone dies - so the living should take this to heart. Sorrow is better than laughter, for sadness has a refining influence on us. A wise person thinks a lot about death, while a fool thinks only about having a good time.” – Ecclesiastes 7:2-4 (New Living Translation)

Solomon wasn’t talking here about some kind of morbid fascination with the details of death. He was referring to the quite healthy idea of stopping to think through the meaning of death. It is the ultimate area for personal reflection. We all identify with dying, death, and grief – whether we like, or want, to admit it.

So, as I watched the around the clock coverage of the passing of Michael Jackson, I found myself moved, not because I was a big fan – far from it. I liked the old Jackson Five stuff and when he sang to that rodent named Ben, but as he grew up and out there, I lost interest. This is not meant to demean or disparage the deceased, not at all. I feel for his family and his fans.

And I also hope that moments like this help all of us to think about what life means and what death is. We have birth certificates (those of us who can find them), but I have never seen one with an expiration date. Death comes in all shapes and sizes.

As a young minister starting out 31 years ago, the first funeral I conducted was for a stillborn baby, whose mother had gone into labor at the church baby shower. Three days later, I was called upon to officiate the service for a 93-year old man. Since then, my work has thrust me into moments somewhere between those age parameters.

I have given eulogies before thousands. And I have comforted an audience of one – a grieving mother – at a service for her son, a Vietnam vet who took his own life. I cried when she was given the flag.

Being a trumpet player, I have played taps in the distance. Being a preacher, I have shared words of comfort as best I could, always with the nagging sense that they fell short, because, well, they did. Being a human being, I have wept, even if my tears were tempered by my Christian faith and hope. Jesus himself wept, though knowing that his deceased friend, Lazarus, would momentarily rejoin the living.

Do I think celebrity-driven grief is overdone? Yeah probably, but I know it is easy for us to become myopic these days, obsessed with something out of proportion to how it actually impacts our individual lives. I also find myself somewhat put off when people can’t seem to find emotion in them when something sad – writ large - happens.

You see, when I think of Ed McMahon’s passing, I think of my elders, some who have long since left this earth, and others who are moving toward that inevitable moment. When I think of Farrah Fawcett, I can’t help but think of my mother, who passed several years ago in her 60s, after a lengthy and valiant battle with cancer and its complications.

What do I think of when I focus on Michael Jackson’s passing? I think of a little boy with such talent, and then the man he grew into. He was obviously someone who struggled on several levels, and seemed to have so many unhappy moments, in spite of a global fan-base and the fleeting nature of material success.

As a student of history – and as an amateur historian, as well – I know that there is a time and place for the analysis of a life: the good, bad, and ugly. But it’s not during the wake. There should be a time and space to mourn, especially for those who really knew him. It is unseemly to sift cynically through a man’s life – and I imagine there is a lot there that would not match my values – in the immediate shadow of his passing. History can be written later, revealing things and teaching lessons.

Was Michael Jackson a bad or good person? I have my thoughts (rooted in scripture), others may think differently. But that he was a broken and hurting person, most would agree. When Jesus announced his ministry in Capernaum, quoting from Isaiah chapter 61, he did not indicate that he was on the scene to root out the bad people, but he did talk a lot about the broken and needy. And in the verse after the great John 3:16, Jesus talked about how he wasn’t sent to condemn the world, but to redeem it.

This is not an exercise in semantics, nor is it an attempt to water anything down. Jesus didn’t need to condemn, because the righteous law of God had been doing that all along. God is a judge and will judge according to righteousness. His righteousness. Defined by Him. It will be very real. In fact:

“And as it is appointed for men to die once, but after this the judgment.” – Hebrews 9:27 (New King James Version)

For now, the most compelling lesson for us as we note the passing of some famous people is to approach it all like Solomon: “A wise person thinks a lot about death, while a fool thinks only about having a good time.”