Of Mice, Pumpkins, and Former Presidents 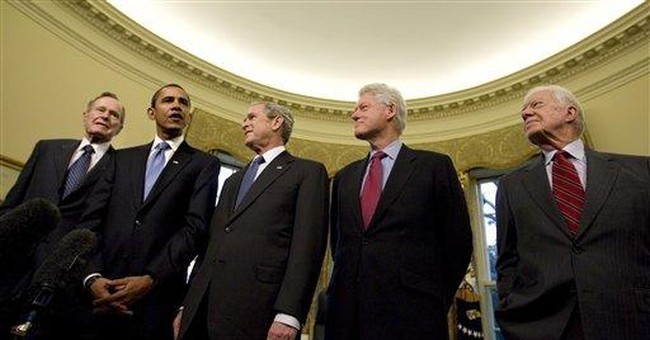 Sometime after the transition in January of 1969, President Richard Nixon asked his predecessor, Lyndon Johnson, how it felt the moment he knew he wasn’t president anymore.  LBJ replied:

“I don’t know whether you’ll understand this now or not, but you certainly will later.  I sat there on that platform and waited for you to stand up and raise your right hand and take the oath of office, and the most pleasant words that I ever – that ever came to my ears were ‘So help me God’ that you repeated after that oath.  Because at that time I no longer had the fear that I was the man that could make the mistake of involving the country in war, that I was no longer the man that would have to carry the terrifying responsibility of protecting the lives of this country and maybe the entire world, unleashing the horrors of some of our great power if I felt that was required.”

As the nation watches the high and historic drama unfold on January 20th, all eyes will be on Barack Obama and his beautiful family.  While he assumes the awesome responsibilities that come with being America’s 44th president, there will be another – much quieter – drama unfolding.

George W. Bush will fade into the political sunset and take his first steps as a former leader of the free world.  And as he takes a final lap during these waning moments of his administration, complete with exit interviews, a press conference, and address to the nation, he has the look of someone who is very much looking forward to some of what Lyndon Johnson was talking about.

Harry Truman remarked at the moment he inherited the presidency that he felt as if a “load of hay” had fallen on him.  Well, hay or whatever, the day he left office he felt relief.  As he sat on the platform listening to Dwight D. Eisenhower deliver his inaugural address, Truman found his mind wandering.  A short while later, he was in a limousine for a ride to a farewell luncheon.  Suddenly, the driver stopped for a red light – the first such traffic observance for Truman since April of 1945.

Those first hours as a former president must be interesting indeed.

In 1921, Woodrow Wilson was a shell of the man who had heard cheering in so many languages just a year or so earlier.  There was a moment when he had been seen as an almost Messiah-like figure.   But then, virtually wheelchair bound due to the debilitating effects of several strokes, his health prevented him from sitting outdoors to observe Warren Harding’s inauguration.  Instead, as he heard cheers for his successor in the distance, he was driven along the quiet streets of Washington, D.C. to his home on S Street.

But Wilson was still in the vicinity of the Capitol as his presidency expired, not so with Richard Nixon who relinquished the burdens of his presidency 39,000 feet over Jefferson City, Missouri on August 9, 1974, as Gerald R. Ford was taking the presidential oath in the White House East Room.  The moment was marked by the singularly simple act of Colonel Ralph Albertazzie, the pilot of the presidential plane carrying Nixon to California.  He changed the aircraft’s call sign from Air Force One to SAM 27000.

The most dramatic inauguration day in recent memory was in 1981.  At the very moment Ronald Reagan was succeeding Jimmy Carter, 52 hostages held by the Iranians for 444 days were boarding a plane at Tehran’s airport en route to freedom.  Carter had spent a sleepless night monitoring the situation.   The next day, the 39th president flew to Germany on behalf of the 40th to meet the freed Americans.  Mr. Carter’s defeat in the recent election was due, in part, to his inability to obtain their release.  The timing of the plane’s departure from Iran was delayed.  This was one final act of insult by the captors.  They didn’t let the captives go until the new president was sworn in.

As the now-former president met with the hostages, one aid, Hamilton Jordan, noted that Jimmy Carter “looked as old and tired as I had ever seen him.”

Years before he was elected to the nation’s highest office, William Howard Taft – who had a well-known aversion to overt politics – said: “It will be a cold day when I go to the White House.”  He was right.  That inauguration 100 years ago (though then still taking place on the 4th of March) was conducted against the backdrop of frigid temperatures and freezing rain that formed an arctic crust over the Capitol grounds.  But the weather wasn’t the only frosty element that day – outgoing president Theodore Roosevelt, already less-than-enamored of his hand-picked successor’s moves away from “continuity,” watched the proceedings with “a stony expression and balled up fists.”  This body language seemed to telegraph coming problems between Teddy and Taft.

John F. Kennedy’s celebrated inauguration was also tempered by hard and bitter weather, in the wake of a blizzard in Washington.  As he spoke that day, vapor surrounded his words.  The contrast between the youthful new leader and his aged predecessor was stark.

Following the ceremony, Eisenhower and his wife Mamie slipped out a side exit and went to the F Street Club for a luncheon with close friends.  They then got in their car – just the two of them – and drove to their farm in Gettysburg, Pennsylvania.  The drive should have taken a couple of hours, but because of the weather it turned into a ten-hour ordeal.

Eisenhower, by the way, was the first former president to retain the services of a personal Secret Service bodyguard after leaving the White House – but only for two weeks.

On March 4, 1933, Herbert Hoover and Franklin Roosevelt rode together from the White House to the Capitol to transfer power at a critical moment in our nation’s history.  But any eavesdropping fly on the car window would have been disappointed at the dialogue.  Breaking a long and awkward silence, the generally loquacious Roosevelt noted the new Commerce building under construction.  Hoover had been Secretary of Commerce before becoming president, so FDR likely thought this would be a good icebreaker.  The man who would soon take the oath of office remarked: “Lovely steel.”

Hoover had no response.  It was the last time they would ever “speak.”

Whatever warm fraternity exists these days between former presidents – as was demonstrated last week at the ultimate White House power lunch – no such feelings were anywhere to be found 76 years ago as administrations changed during that time of severe economic crisis.

By the way, one of the first things Harry Truman did after becoming president was to invite Herbert Hoover back to the White for the first time since March 4, 1933.  Truman correctly sensed that only former presidents truly understand what the office personally means.

The journey from power to lack thereof is a short one.  It passes as quickly as the flip of a switch as the clock marks the moment and solemn words are uttered.  In this unique split-second, one person assumes an awesome burden, while another gives one away.

As you watch the events unfold on Tuesday, look closely at the faces of George Bush and Barack Obama and you’ll see two men smiling - one out of relief, the other out of excitement.   And both men will likely be thinking “Now what?”

Long after nightfall on January 20, 1969, Lyndon and Lady Bird Johnson arrived at their 330-acre Texas ranch. LBJ had been an ex-President for just a few hours. Throughout the day friends had gathered – first at Andrews Air Force Base, then at Bergstrom Air Force Base in Texas. They showed up to say thank you to the man who had ascended to the presidency in those chaotic Dallas moments more than five years before - and who less than a year before had pulled himself out of the race for a final term in the White House.

One of the first tell-tale signs that life was going to be comparatively perk-free was when they came upon their massive collection of luggage that had been left in the carport that evening, with no one around to carry the bags. Mr. and Mrs. Johnson laughed.  Ladybird then uttered a phrase that captures what all former presidents probably come to understand as they take their first steps as former presidents:

“The coach has turned back into the pumpkin and all the mice have run away.”