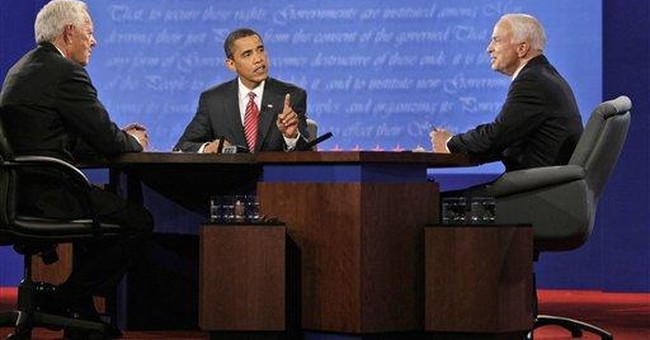 The final debate between John McCain and Barack Obama was primarily about the economy.  That was appropriate and understandable.  The big winner was Toledo’s new favorite son, Joe the Plumber – who will now be able to charge a lot more for his pipe-wrench artistry.  And he will never again have a problem getting a table at Tony Packos.

It would be wise, however, for all Americans to remember something very important that is being overshadowed by the current cultural obsession.  We are all concerned about our money.  But the stakes right now are higher than mere dollars and cents.

In other words: It’s not just the economy, stupid.

As the long and hard fought presidential election campaign moves into the final frenetic stretch, there is an important court trial underway across the Atlantic - in Scotland.  Two men have been charged with plotting terrorist bombings in Glasgow and London last year.

Two Muslim men - Mohammed Asha is from Jordan and Bilal Abdullaf is from Iraq.

Both are medical doctors.

While Americans worry about the possibility of another Great Depression, it is worth asking if we are in danger of being preoccupied with a Great Distraction at a crucial moment in our history.

Of course, our economic woes are quite real – ominous, in fact.  And they cannot and should not be ignored.  Not watching the store is what got us into this fix in the first place.  But one has the sense that this nation is an increasingly soft target for something worse.  And if it ever were to turn out that while we focused like a laser beam on the economy, our enemies decided to exploit our myopia, we could be in a bigger mess than we have ever imagined.

I am not trying to be “gloom and doom” here – just saying that it has probably crossed the mind of an adversary or two that this would be a fitting time to unleash something bad.

Bad, as in “where, oh where are you Jack Bauer?”

It is important for all of us to realize – even if it involves interrupting our current morbid fascination with the Dow and all things monetary – that the greatest strategic threat against our nation is not something that has been, or could be, done by people named Freddie or Fannie.  Not even close.  Our greatest enemy is, and will be long after the current financial mess is cleaned up, Islamism and its agenda to subdue all who persist in the audacity of being non-Muslim infidels.

He also said: “All warfare is based on deception.”

There is an elephant in the big room under America’s spacious skies.  It has to do with the potential for us to eventually see some of the same things happen here that are happening more and more frequently in Europe.  I am referring to things like two presumably intelligent, and certainly well educated, doctors in a plot to bomb and kill.

Daniel Pipes is a widely read expert on the threat of radical Islam.  He is a director of the Middle East Forum and calculates that, "10 to 15 percent of Muslims worldwide support militant Islam."  Let’s do the math (a fine young man on my staff, who has a graduate degree in theoretical mathematics would remind me here that this is arithmetic, not math – but you get my drift).

Estimates of the global Muslim population range between 1.3 and 1.6 billion – roughly one in five human beings.  This means, if Pipes is right (and it is possible his estimates may be on the conservative side) – that there may be between 130 and 240 million people in the world who, in the name of Islam, hate America.  These are the people who had a party on that sad September day seven years ago.

By the way, the total combined population of an earlier axis of evil enemies - Nazi Germany, Fascist Italy, and Imperial Japan in September of 1939 - was approximately 194 million.  That’s total – as in every man, woman, and child.

How about the statistics right here in the U.S.?  Well again, the estimates are all over the place, but it is generally accepted that between three and five million of our neighbors are Muslim.  An article in Newsweek last year used the figure eight million.  Applying the Pipes formula to here at home, we come up with the potential for anywhere between 300,000 and 1,200,000 people in this country who may be less-than-enamored of the rest of us.  Or worse, some may be longing for the day when the fruited plain becomes a Muslim caliphate.

Here is where it gets complicated.  We are a nation of people fierce about liberty.  We believe in things like freedom of speech, freedom of religion, the right to assemble, to vote, and hold these things to be precious.  We have no desire to become a police state, with neighbor turning on, or turning in, neighbor.  We do not want to become hysterical and paranoid.

But there are bad people out there.  They have guns and bombs and ugly ideas.  And they have no problem “blending in” – even spending a long time cultivating a reassuring cover.

Bear in mind that the guys on trial across the pond right now are doctors.

There is a precedent for this, and it is one Americans should study.  A few years ago, Margaret Thatcher, who served as Prime Minister of the United Kingdom from 1979-1990, described an often-overlooked previous pattern for what we are now witnessing.

“Perhaps the best parallel is with early communism. Islamic extremism today, like bolshevism in the past, is an armed doctrine. It is an aggressive ideology promoted by fanatical, well-armed devotees. And, like communism, it requires an all-embracing long-term strategy to defeat it.”

The Iron Lady nailed it.  Though the terms Islamo-fascist and Islamo-nazi are used these days with regularity, perhaps Islamo-bolshevik should become part of our vocabulary.  Though Islam and communism as ideologies bear little resemblance to each other, beyond a mutual affinity for subduing and controlling others, they do have much in common methodologically.

It is a mistake to think of terror as the only weapon in the Islamist arsenal.  It is a very public one, indeed – and horrifying.  But behind the ugliness of terrorism lies a persistent and pernicious pattern of deceit and manipulation.  The term taqiyya refers to the practice of deliberate deceit in the service of Islamist goals.  The ends justify the means, in other words - lying, fraud, stealing, cheating, all things that most religions commonly consider sins, are perfectly appropriate in the pursuit of jihad.

John J. Dziak, Ph.D., a professor at The Institute of World Politics in Washington, D.C., has written extensively on Russian Intelligence.  Last year, his article, Islamism and Stratagem, appeared in The Intelligencer: Journal of U.S. Intelligence Studies.  He drew parallels between the methods used by current day Islamists, and those used ninety-plus years ago by Lenin and company:

“The Bolshevik regime was a conspiracy come to power.  The Soviet Union in practice was a seventy-one-year old counterintelligence operation raised to the level of a state system.

Organic to such a counterintelligence system is the widespread practice of provocations, diversion, deception, disinformation, ‘maskirovka’ (military focused deception), penetration, and other active measures of a highly aggressive nature.”

He also noted that, “from its earliest history Islam has practiced what westerners label stratagem, deception, dissimulation, concealment, etc., in its dealings with not only the Infidel but with other Muslims, as well.”  He identified Islamism as, “the twenty-first century heir to the counterintelligence state traditions of the totalitarian systems of the last century.”

During a recent radio interview, Brigitte Gabriel, author of the new book, They Must Be Stopped: Why We Must Defeat Radical Islam and How We Can Do It, told me, “history reveals very clearly that the apathetic give way to the passionate, and the complacent are subdued by the committed.”

I have written before about the love Islamists have for a spurious document called, The Protocols of the Elders of Zion.  This anti-Semitic tract, though long-ago exposed as a forgery created by the Tsar’s secret police to foster anti-Jewish sentiment in early 20th century Russia, has long been a favorite of demagogues from Adolf Hitler to Mahmoud Ahmadinejad.

The ironic thing is that, though the idea of a vast Jewish conspiracy to control the world has been so clearly proven as false, a group called the Muslim Brotherhood actually did write a plot of their own.

And this document is no forgery.

Brigitte Gabriel devotes an entire chapter to this in her book and it is chilling to read.  Discovered in Switzerland just a few weeks after September 11, 2001, “The Project,” as it has come to be known, outlines a century long plan “to dominate the West and establish an Islamic government on earth.”

It is a 14-page “How To” manual about infiltrating a society en route to eventually subjugating it.  Among its instructions are such motivational nuggets as:

Lenin could not have said it any better in What Is To Be Done.