Heath Ledger and the Rest of Us 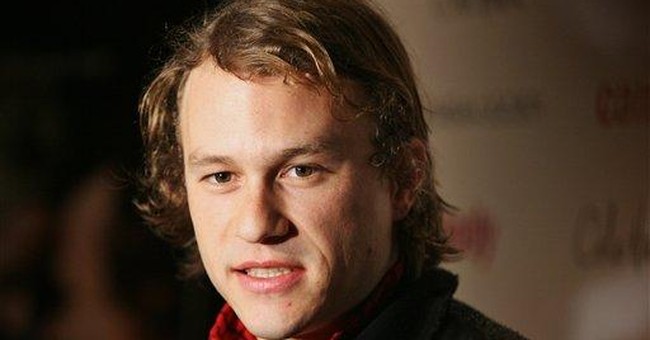 When the news broke about the death of Heath Ledger, I heard about it first from my daughters – their ages ranging from 24 to 30. The frenetic texting and animated cell phone conversations told me something was up. This young actor was a face and name very familiar to them and their generation.

Not so much to me. I had to strain to try to figure out who he was – before I located a picture on line.

I had managed (thankfully) to completely miss Brokeback Mountain – preferring my “Westerns” more, well, traditional, with the only slightly disturbing image being a cowboy acting benignly affectionate toward his faithful horse. Some of the other titles my girls mentioned, featuring Ledger, brought that deer in the headlights look they are sadly accustomed to seeing from their dear old dad.

Then one of them mentioned the movie The Patriot - and the part Ledger played – and the light came on. Now, THAT was a movie! It had a point - a good point - one well worth remembering.

It is far too early to draw detailed conclusions about the circumstances leading to this young man’s death.  Excessive speculation is unwise, but the word tragic certainly fits anytime someone so young, with such promise, dies suddenly.  I’m sure the next few days will yield reports ad infinitum about his lifestyle and final weeks.

One thing I did note, though, is that two experiences seemed to converge in his life, recently.  First, his break up with his girlfriend and the affiliated estrangement (at least somewhat) from his young daughter – 2 year old Matilda, certainly rocked his world.  That’s very sad stuff.  It’s sad, not only because of the whole “breaking up is hard to do” thing, especially when there is a child involved, but also because of the aversion contemporary culture has to commitment and continuity.

Modernity has effectively decreed that gratification is seldom, if ever, to be deferred and, therefore, seldom sustained.  Pleasure unredeemed by grace, commitment, and discipline tends to burn the relationship candle too fast – both at the beginning and the end.

The result is a lifestyle of diminishing fulfillment returns.

We can’t be sure how depressed he was, or what part it played, if any, in his death – but no doubt about it, the guy was dealing with sadness.

Then, he recently finished his part in the upcoming Batman movie. This is version 37, I believe (“holy excessive sequel…Batman”).  He played The Joker and from all I am reading it’s clear that this is not my grandchildren’s grandpa’s Joker – you know the one with Caesar Romero?  No, the new, in my opinion unimproved, Joker is apparently no joke at all.  He is a far darker (can I say “demonic”?) character than the one in previous Gotham crime-fighting manifestations.

I know the Joker is supposed to be a bad guy. I get that.  But, why does his badness have to be so graphic? Ledger, himself, in an interview last November with The New York Times, described his version of the man with the twisted smile as a “psychopathic, mass-murdering, schizophrenic clown with zero sympathy.” He also admitted that while portraying the character he had difficulty sleeping.

Now, I know I am running the serious risk of knee-jerk reductionism, but to overlook the capacity of how darkness impacts the human mind is the opposite of appropriate reflex (that being to be so hardened and twisted that the obvious becomes the last place we look for answers).

Playing around with evil always does that.  Excessive exposure to the darkness of morbid immorality tends to pull a fierce and troubling shadow over the human heart and mind.  And, when darkness is so pronounced that light seems too distant to ever approach, it creates chronic personal vulnerability.

The Bible talks about those “who became futile in their thoughts, and their foolish hearts were darkened.”  And, though I am in no position to judge Mr. Ledger (and I am, in fact, not doing so – just trying to highlight some larger issues that speak to me from this tragedy), I do very much believe that the utter moral and emotional bankruptcy of modern living with its aversion to commitment and continuity, is the elephant in the room that too many, trying today to find answers in the tragic death of a gifted young man, will miss.

Finally, all praying people should pray today – for his family, especially that beautiful little 2 year old, Matilda. And, we should pray for the rest of us – our nation, our culture.

Celebrities are not really that different from people in general.  They are just symptoms writ large.