20 Years of Wolves in Government Clothing 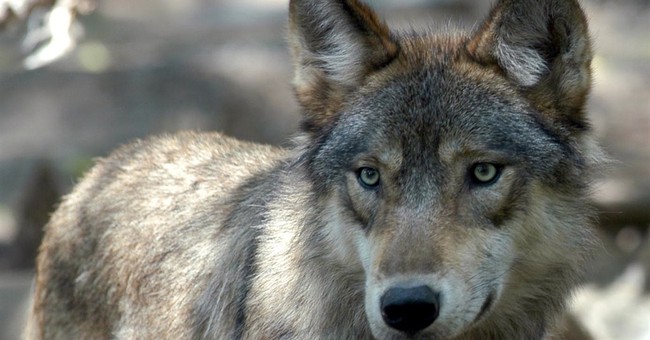 The 20th anniversary of a government program to bring gray wolves to Yellowstone Park marks two decades of debate over the Federal government’s role in forcing wolves on individuals, communities and states that may, or may not, want them. Sixty Canadian wolves planted in Yellowstone Park in 1995 and 1996 have turned into thousands of wolves roaming the surrounding states. For those who idolize wolves as an icon of the wilderness, this week marks the historic success of a government program to bring a species back to an area it once roamed prior to the settlement of human populations. But there is another side to this story. Many of those forced to live in areas populated by wolves see them as unnecessary, and an expensive burden to state budgets, livestock growers, and hunting industries. As a fourth generation Montanan, who has spent time in Yellowstone Park almost every year for five decades, I find myself in the latter category.

Wolves were removed from most settled areas in the lower 48 states nearly a century ago for a reason – they are a very difficult predator to manage. This is an apex predator that multiplies quickly and must kill more animals to survive than any other species in North America. It is also a species that is a threat to humans, as evidenced in the recent death of a teacher in Alaska who was killed by wolves while jogging.

The Greater Yellowstone Area is not what it was 20 years ago. Elk and moose populations have been decimated. One of the most scenic drives in Montana is the route from West Yellowstone to Bozeman on Highway 191. Twenty years ago, this 90 mile stretch of road that follows the Gallatin River, offered a chance to view herds of elk along with moose and other wildlife. Today it is rare to cross paths with an elk or moose. Large herds of elk that once wintered in the Gallatin Canyon are gone. The northern Yellowstone elk herd numbered over 20,000 in 1995. Today less than 4,000 elk remain. Wolves effectively changed the wildlife paradigm.

Wolf predation has been touted as a necessary ingredient for a healthy eco-system. Environmentalists claim an apex predator is necessary to control and improve wildlife populations, but those who make this argument ignore the contribution of the most effective apex predator, mankind. State hunting programs, including late season hunts, are a far more effective way to control wildlife populations. A thriving hunting industry equates to more revenue for state budgets and more revenue for Montana Fish, Wildlife and Parks programs through the sale of hunting licenses. More opportunity to hunt elk also means more families are able to put a great source of protein on their tables with little expense.

Dogs may be man’s best friend, but wolves are a rancher’s worst nightmare. Despite programs to compensate livestock owners for predation losses, the mere fact that wolves are in the vicinity of cattle, sheep, or horses results in expenses associated with conflict mitigation and, in many cases, a loss of livestock weight due to the nervous behavior of animals when wolves are nearby. Wolves simply don’t mix well with livestock.

Regardless of which side of the wolf debate a person may land, we should all be able to agree that decisions on how to manage wolves should be left up to local communities and states, rather than bureaucrats in Washington, D.C., or a single judge applying an opinion of the Endangered Species Act (ESA). After all, every elected official swears an oath to defend the U.S. Constitution that explicitly states powers not enumerated therein are reserved to the states and people. The ESA is not authorized by the Constitution and its implementation is an inappropriate and contrived federal seizure of states’ rights.

Since its passage in 1973 the ESA has been ineffective in achieving its species recovery objectives. Over 2,000 species are listed as endangered or threatened under the ESA, over the past 40 years less than 1% have been deemed recovered and delisted – hardly a success story. One of the primary problems with the ESA is the broad criteria used in listing a species. The vast majority of species listed are in no danger of extinction. The gray wolf is a prime example. This is an animal that has never been in any danger of extinction and should never have been granted Federal protection under the ESA. The ESA however, has been applied to subspecies and demographic population segments, in addition to entire species. This is the case for the wolf in the northern Rockies that is listed as a distinct population segment, while the entire species is not endangered. It is an example of how, unfortunately, the ESA provides far too much arbitrary power to government agencies and courts, and allows them to circumvent state’s rights outlined in the 5th and 10th Amendments.

Montana and Idaho were only allowed to manage wolves after Congress stepped in and passed legislation that delisted the gray wolf in these two states in 2011. Now several members of Congress are preparing similar legislation to delist wolves in Wyoming, Wisconsin, Michigan and Minnesota. The ESA desperately needs to be reformed. Congress should not have to check and balance the executive branch by delisting species because agencies fail to do their jobs, or unwarranted court decisions override state laws. The ESA has become a convenient tool for radical environmentalists and government agencies to pursue their agendas at the expense of state’s rights and the rights of private property owners. It’s time to let Montana and other states decide how they want to manage wildlife populations within their borders.