David S. D'Amato
|
Posted: Aug 04, 2018 12:01 AM
Share   Tweet
The opinions expressed by columnists are their own and do not necessarily represent the views of Townhall.com. 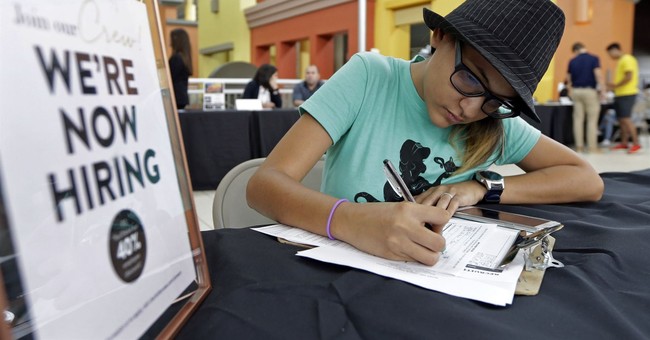 Job-guarantee proposals have dominated headlines of late, with high-profile politicians such as Sens. Kirsten Gillibrand (D-NY), Bernie Sanders (I-VT), and Cory Booker (D-NJ) advancing the policy and former head of the U.S. Treasury, Lawrence H. Summers, calling it “the latest ‘big’ progressive idea.” Advocates argue that a job guarantee would ameliorate income and racial inequality, and forestall recessions. The policy’s champions sell it as a win-win: No one who wants to work would be unemployed and the economy at large would benefit, too. According to their flawed logic, if a healthy economy generates jobs, then perhaps we can beget a healthy economy by “creating” jobs in the first place.

However, these policymakers have matters precisely backwards, failing to understand that if it were so easy to guarantee jobs in this way, it would be no less possible to simply legislate gross domestic product growth. It is ludicrous to believe the government can create prosperity and economic development through the thaumaturgical power of statute. The forces of supply and demand stubbornly persist despite the will of crusading legislators. Further, mandating jobs for all would come with unintended consequences that run counter to the stated goals of any job-guarantee program.

Employers’ resources are finite, and their personnel decisions reflect this fundamental fact. If business owners are not hiring of their own accord—that is, without being coerced by the law or otherwise induced by taxpayer dollars—then they have determined that the costs of adding workers outweigh the benefits. In other words, they can’t afford more staff. This is not a decision for politicians, who lack the information and incentives necessary for sound stewardship of others’ businesses. If the economy could sustain these new jobs without taking a loss, they would already exist, rooted firmly in actual consumer demand.

Competition and markets work because they allow multiple points of decision-making power. In the words of Adam Smith, the “invisible hand” guides the intersection between actors with their own interests—millions of connected nodes that generate feedback as to how time and resources ought to be allocated.

Although the marginal benefits of job-guarantee programs are questionable, at best, the costs are quite conspicuous and significant. Even conservative cost estimates put such a job-guarantee schemeon par with some of the government’s most expensive programs, Medicare and defense spending, both of which are plagued by waste and inefficiency. However, sometimes the negative consequences take time to express themselves, which makes policies such as a job-guarantee program so beguiling for legislators trying to win political points with well-meaning but naive do-gooders.

There are simple psychological reasons that politicians and policy wonks who regard themselves as pragmatic, and thus focused on practical solutions rather than ideology, dramatically underestimate costs and overestimate benefits. We tend to be biased in favor of what we can see right away, the immediate result. As the causal chain becomes more protracted, it becomes more difficult to accurately allocate costs among particular public policies. Eager to take credit for any perceived benefit of a policy, politicians never have to be confronted with the more distant costs. Until jobs fall like manna from heaven, any government “guarantee” of employment will have to mean arbitrarily removing resources from some people and projects to invest them in others.

It is, moreover, ironic that the state would be charged with the creation of jobs or the guarantee of employment, given that government is the foremost job-destroyer and preventer. A destructive combination of special-interest regulatory capture, basic economic illiteracy, and administrative hubris drives these regrettable, job- and growth-killing policies.

It’s difficult to take government seriously on this issue—and there’s no reason why we should. Government has no credibility when it comes to creating economic opportunities for working people. On the other hand, it certainly has a long and storied history of placing hurdles in the way of economic advancement, of precluding job-seekers from self-employment, and undermining innovation. Favored by this warped pay-to-play economic framework are large incumbent firms, possessed of the financial and personnel resources to parse the red tape and navigate the regulatory labyrinth. We should expect that government job guarantees will similarly favor the well-connected and government-dependent.

Rent-seeking corporations use their access to industry regulators to solicit costly rules that create artificial scarcities, driving out smaller competitors. Needless occupational licensure regimes cost the U.S. economy millions of jobs. As more and more on both sides of the aisle and the putative political divide are coming to realize, most existinglicensing rulesandother regulationsare regressive, a deadweight economic loss. Not only do they fail to serve stated consumer protection goals, in most cases they actually inhibit economic opportunity and mobility.

The astute observer will, no doubt, wonder why policymakers don’t chart another course, the more direct one, removing these artificial, coercive obstacles to commerce, innovation, growth and thus new jobs. Lawmakers seem intent on placing the government in the way of job creation wherever possible, its interventions costing the national economy as a whole trillions of dollars. In 2016, the Mercatus Center estimated that if regulations had merely been frozen at 1980 levels (themselves quite high), the economy would have been approximately 25 percent larger than it was in 2012.

Furthermore, even the notion that government acts in the public interest, that its interventions will redound to the benefit of society’s worst off, is itself a deeply pernicious myth, at odds with the historical record. In his book,Our Enemy, The State, Albert Jay Nock explains that the state’s primary purpose—and the underlying purpose of its various economic interventions—is “maintaining the stratification of society into an owning and exploiting class, and thus a propertyless dependent class.” Quite contrary to the happy notion that the state was born of a contract, instituted to provide law and order and serve the common good, Nock shows that those administering it are tantamount to “a professional criminal class,” its interests and goals being “purely anti-social.”

Proposed job-guarantee policies would address and perpetuate the wrong problem. The real issue is not how to use government to guarantee everyone a job, but how to restrain government and how to stop a decadent and corrupt organization (whose only tool is force) from arbitrarily limiting free markets and job-seekers’ prospects. A totalitarian state seeks to guarantee employment, regarding its subjects as charges, as dependents or wards. A free society resolves to limit the size and scope of government, certainly out of the way of job-creators’ and jobs-seekers’.