David Limbaugh
|
Posted: Dec 07, 2018 12:01 AM
Share   Tweet
The opinions expressed by columnists are their own and do not necessarily represent the views of Townhall.com. 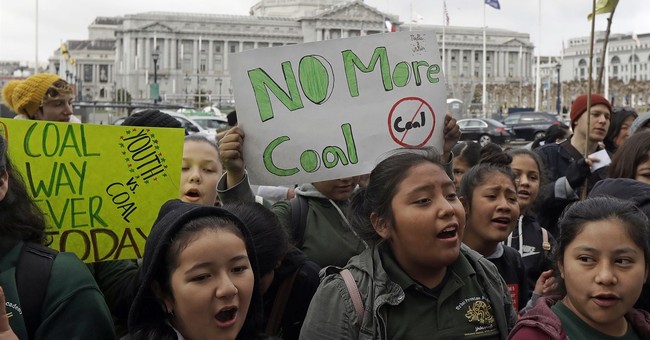 Meaning no disrespect to climate alarmists of the past half-century, who have been quite formidable in their doomsday warnings, the modern era has ushered in a new wave of scaremongers who threaten to eclipse their predecessors.

This shouldn't discourage the original enviro-wackos of the 1970s, who hadn't accumulated sufficient empirical data to support their burgeoning secular religion. Give those people a break; how were they to know they'd have egg on their faces for predicting apocalyptic global cooling? We're much more advanced now, so it's not fair to judge them.

Admit it. A full week doesn't pass without some cataclysmic news about climate change. The meteorological activists are brilliantly adept at shoehorning any weather event or natural disaster into their ominous narrative. If world temperatures are cooling -- or warming -- they attribute it to overall warming. If there's a severe hurricane, it's because of evil capitalist carbon emissions. If California forest fires are caused or exacerbated by their asinine environmental policies, they blame them, too, on the "deniers," because one thing is certain about global warming blowhards: Their supposedly having good intentions means never having to apologize for their consistently failed prophecies. Al Gore, after all, is still an icon of this movement despite his embarrassing record and his unconscionably stratospheric personal carbon footprint.

Have you ever noticed that all proposed solutions for climate change require massive expansions of government control, reduced reliance on free market entrepreneurship, and the surrendering of our national sovereignty to global entities that are hostile to the United States and its founding principles? Is it simply a coincidence that the undying adherents of this pantheistic religion are political leftists who want to control every aspect of our lives? If these collectivists believed that the optimal solutions for our alleged environmental problems were market-based, do you think they would obsess over climate change? Ironically, the best remedies have arisen from the free market, but that's a topic for another column.

Just know this: There is a reigning pessimism in the humanist worldview that undergirds climate hysteria, and it has been around for a half-century. When I was in college in the '70s, a labor economist bemoaned the scarcity of the world's resources and said we'd have to tighten our belts because substantial economic growth was no longer possible. In his defense, we were then living under Jimmy Carter's malaise.

It is always a zero-sum game for statists, who seem incapable of imagining the wondrously creative solutions human beings are capable of if unencumbered by the vise of government control and the mandates of elites. Happily for America, Ronald Reagan believed human ingenuity could develop innovative processes to compensate for finite natural resources. Thankfully, he rejected the dismal notion that there's a finite economic pie. (Fast-forwarding to today, thank goodness President Trump rejected President Obama's similarly fatalistic pronouncement that only a magic wand could restore manufacturing jobs and robust economic growth to the United States. Do we see a pattern here?)

As the left ceaselessly bombards us with climate fearmongering, it's no wonder many have bought into hopelessness and despair. It was hardly surprising to see MSNBC anchor Katy Tur telling her audience this week that her life will be meaningless unless we start addressing the climate change problem. "I read that New Yorker article today, and I thought, 'Gosh, how pointless is my life?'" said Tur. "And how pointless are the decisions that I make on a day-to-day basis when we are not focused on climate change every day, when it's not leading every one of our newscasts?"

I suppose many of you will scoff, but I believe this is largely a spiritual issue. There is a marked difference between being good stewards of the earth and worshipping it in place of God, who created it. Generally speaking, our respective worldviews greatly influence our attitude toward the climate change issue, from beginning to end. Secular humanists -- those who don't believe in God and tend to think that man is the measure of all things -- are likelier to believe that human beings are powerful enough to destroy the planet through carbon emissions. And they are far likelier to believe that this life is all there is -- that there is nothing beyond.

The Bible tells us that God has put eternity in our hearts. Accordingly, human beings, said French philosopher Blaise Pascal, have a God-shaped void in their hearts that cannot be satisfied by any created thing. But that doesn't keep nonbelievers from trying to fill the void and find ultimate meaning solely in the material world. Earth worship is just one of the many impotent quasi-spiritual substitutes human beings cling to in place of their Creator. Let us pray for humility and salvation.