David Limbaugh
|
Posted: Oct 13, 2017 12:01 AM
Share   Tweet
The opinions expressed by columnists are their own and do not necessarily represent the views of Townhall.com. 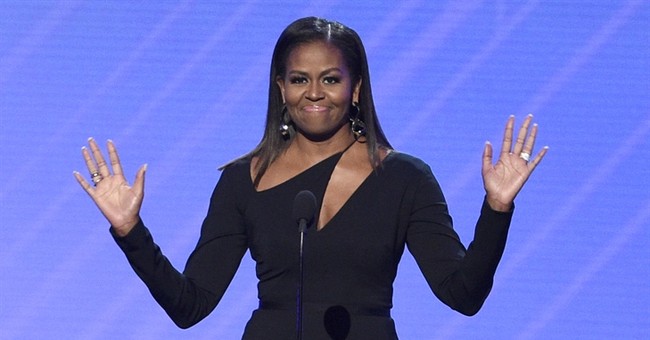 Please join me on a whirlwind superficial but revealing tour of liberal la-la land as we peek at recent headlines. Meanwhile, liberals call conservatives wingnuts.

Singer Nancy Sinatra tweeted, "The murderous members of the NRA should face a firing squad." One wonders whether in her rendering, "murderous" is redundant. One might also wonder whether she thinks other murderous people should be exempt from or perhaps face a less humiliating form of execution.

Responding to Michelle Obama's claim that people are distrustful of politics because the GOP is "all men, all white," Rep. Mia Love, R-Utah, said, "I don't know if she noticed, but I am not white and I am not a male." To clarify, in case you are wondering, in this example, Michelle Obama is the inhabitant of la-la land.

Republican Rep. Marsha Blackburn of Tennessee, who is running for the Senate seat currently held by Bob Corker, encountered Twitter's speech police when trying to place an ad saying, "I fought Planned Parenthood, and we stopped the sale of baby body parts." Twitter's thought cops said the claim was "deemed an inflammatory statement that is likely to evoke a strong negative reaction." They magnanimously assured her that they'd run the ad if she removed the offending statement. If Twitter brass were truly concerned about tweets evoking "a strong negative reaction," the executives would save themselves time and just shut the whole operation down. If you use Twitter much, you know that evoking such reactions is virtually guaranteed in cultural and political tweets, which populate Twitter by the millions every day. It would be much easier to interact with leftists if they could at least be honest with themselves and others about what they are doing in these situations. They have no problem with tweets evoking strong negative reactions from conservatives. But you knew that.

ESPN anchor Jemele Hill last month faced no consequences for calling President Trump a white supremacist but was suspended for two weeks when she urged fans to boycott NFL advertisers because Dallas Cowboys owner Jerry Jones had threatened to bench players who refuse to stand during the national anthem. "Change happens when advertisers are impacted," she tweeted. "If you strongly reject what Jerry Jones said, the key is his advertisers. Don't place the burden squarely on the players." Twitter moguls apparently didn't deem Hill's tweets as likely to evoke a strong negative reaction. I wonder whether Hill would agree that her employer's reaction was neither strong nor negative. One person who doubtlessly wouldn't regard Hill's tweet as negative is ESPN's Michael Wilbon, who compared Jones to a slave owner because of his action.

The Daily Wire reported that activists of Abolish Human Abortion were booted from Bedlam Coffee in Seattle because the gay owner couldn't tolerate their presence. After asking members of the group whether they would tolerate his bringing his boyfriend in the shop and performing sex acts with him in front of them, he told them, "Well, then I don't have to f---ing tolerate this! Then leave -- all of you! Tell all your f---ing friends, 'Don't f---ing come here'!" I have no real problem with owners serving whom they choose in a free market, but I'll note that it's unlikely that we'll hear outcries from the left complaining about this discriminatory treatment because here those being denied service were not asking for a wedding cake for a same-sex marriage ceremony.

In case you haven't heard of the concept of "cultural appropriation," it is the use of certain aspects of a certain culture by another culture, which, to those who use the term, is a bad thing. Who thinks this way? But I digress. University of Texas cultural studies professor Luis Urrieta has taken the concept to a new level. Urrieta noted that these appropriations have "many economic, social and symbolic repercussions. The first is obviously the theft of intellectual property, the theft of communal knowledge. ... Socially, it reduces native and indigenous peoples to 'artifacts' that can be worn, used, consumed and displayed." A few examples of what they mean by "appropriation" will suffice to illustrate. The University of California, Merced told fraternities and sororities they should avoid using the terms "Greek," "rush" and "pledge" because they are appropriations of Greek culture. And at San Francisco State University, an African-American student reportedly attacked a white student because his hair was in dreadlocks. No, you really can't make this stuff up. "Appropriation is a form of theft," said Urrieta. "It is a nice way of saying that someone is taking someone else's (idea) and making it their own." In my humble view, the burden of defending such Twilight Zonery is on any who would defend it, but maybe I'm just old-fashioned. In case you think Urrieta is merely an outlier, another professor, Rachel V. Gonzalez-Martin, described cultural appropriation as "cultural poaching." If you're still thinking "outliers," the University of Michigan advertised to recruit a person -- at an annual salary of $50,000 -- to handle "cultural appropriation prevention activities." Don't laugh; this isn't satire.

Finally, California Gov. Jerry Brown recently signed legislation lowering from a felony to a misdemeanor the act of knowingly exposing a sexual partner to HIV without disclosing the infection to the person. Also protected by this outrageously reckless nod to political correctness are those who give blood without revealing their infection. Here I can't say "there are no words," because there are plenty, but I've run out of space.

For the same reason, I must omit tons of other examples, but in mitigation for this inadequacy, I think it is only fair that I get props for not opining on the Harvey Weinstein scandal, trusting that the news saturation on this story has reached your homes.