David Limbaugh
|
Posted: Jul 12, 2016 12:01 AM
Share   Tweet
The opinions expressed by columnists are their own and do not necessarily represent the views of Townhall.com. 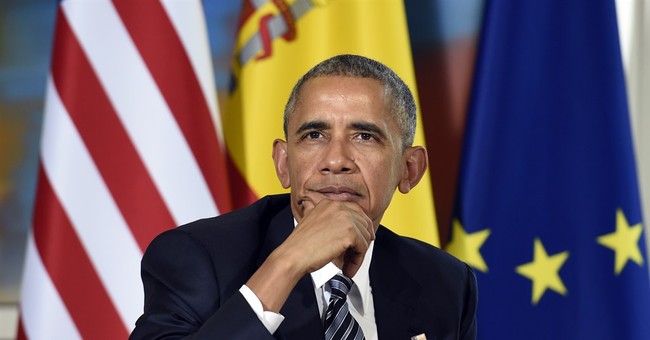 Trending
President Obama's knee-jerk reaction to the Dallas shootings brings into clear relief his biases and double standards on racially or religiously motivated violence. Have we ever had a president as blinded by his ideology and as oblivious or dismissive about his own biases and the double standards he invokes?

If blacks or Muslims commit acts of violence, Obama calls for unity and demands we not rush to judgment. He bends over backward to deny the racial or religious motives of the actors. In countless acts of Islamic terrorism, before he has even expressed outrage or sorrow over the victims' deaths, Obama lectures us on the immorality of blaming actors of a single religion, tells us how wonderful and peaceful the religion is, and admonishes us against drawing inferences based on indisputable facts.

In Warsaw, Poland, during a news conference, one journalist asked Obama to address the motives of Micah Johnson, the shooter who massacred police officers in Dallas. She said: "Help us understand how you describe his motives. Do you consider this an act of domestic terrorism? Was this a hate crime? Was this a mentally ill man with a gun?"

Obama replied, "First of all, I think it's very hard to untangle the motives of this shooter."

No, it's not hard to untangle the motives of the killer, because they weren't tangled. He made them quite clear both on Facebook and in his exchanges with cops during the standoff. Troubled or not, he appeared to hate white people and was livid at cops. Indeed, Dallas Police Chief David Brown said Micah Johnson "wanted to kill white people, especially white officers."

Obama simply ignored the question of whether the Dallas shootings were a hate crime, yet he had no difficulty in so characterizing the recent police shootings of black men in Louisiana and Minnesota. Nor in these cases did he call for unity and restraint. Instead, he reflexively detailed the evidence that allegedly demonstrates law enforcement discrimination against minorities, though the evidence of such bias is hotly disputed, as shown by Heather Mac Donald's thorough examination of the data in her new book, "The War on Cops."

Obama's flagrant double standard has been on display throughout his tenure in office.

When Nidal Hasan, with known ties to radical Islam, fatally shot 13 people and injured more than 30 others while screaming "Allahu akbar," Obama said, "We don't know all the answers yet, and I would caution against jumping to conclusions until we have all the facts."

When police in Cambridge, Massachusetts, arrested black Harvard professor Henry Louis Gates Jr. at his home, Obama sprinted to judgment, wholly without benefit of all the facts, and condemned the police, who he said "acted stupidly."

After George Zimmerman was acquitted for the shooting of Trayvon Martin, Obama couldn't resist the urge to identify with Martin, saying, "Trayvon Martin could have been me 35 years ago." He couldn't pass up a chance to lecture us on the "history of racial disparities in the application of our criminal laws," even though Zimmerman is Hispanic.

When the Tsarnaev brothers planted bombs at the Boston Marathon and killed three people and injured hundreds more, Obama said: "In this age of instant reporting ... there's a temptation to latch on to any bit of information, sometimes to jump to conclusions. But ... it's important that we do this right. ... That's why we take care not to rush to judgment -- not about the motivations of these individuals, certainly not about entire groups of people."

When white police officer Darren Wilson shot and killed African-American Michael Brown in Ferguson, Missouri, after his robbery of a convenience store, his resisting arrest and his storming of the officer, Obama didn't calm activists who were wrongly claiming that Wilson had shot Brown in the back without provocation. He deliberately exploited the incident as an example of the "gulf of mistrust (that) exists between local residents and law enforcement." He said, "Too many young men of color feel targeted by law enforcement -- guilty of walking while black or driving while black, judged by stereotypes that fuel fear and resentment and hopelessness." Maybe so, but it was highly inappropriate for Obama to mention those matters in connection with the Brown shooting, which had nothing to do with race. And it was reckless for Obama to fan the flames of racial animosity in that way. He expressed no similar indignation when riots ensued, and the havoc resulted in injured people and millions of dollars of property damage.

Obama didn't demand restraint when Muslims were shot in Chapel Hill, North Carolina. He said the FBI was taking steps to determine whether federal laws were violated. "No one in the United States of America," he said, "should ever be targeted because of who they are, what they look like or how they worship."

When African-American Freddie Gray died one week after riding without restraints in a police van after his arrest, Obama, again rushing to judgment while pretending not to, said: "We have some soul-searching to do. This is not new. It's been going on for decades."

Immediately after Dylann Roof allegedly shot black Christians in Charleston, South Carolina, Obama said: "The fact that this took place in a black church obviously also raises questions about a dark part of our history. ... We know that hatred across races and faiths (poses) a particular threat to our democracy and our ideals."

Concerning the recent jihadi murder of 49 people in Orlando, Florida, Obama said: "We are still learning all the facts. This is an open investigation. We've reached no definitive judgment on the precise motivations of the killer." Never mind that the killer clearly expressed his motives.

If Obama were to apply a consistent standard to these incidents and not reveal his own biases, he might have some credibility in those cases where he calls for unity. Instead, he has been a catalyst for racial and religious division in his words, actions and policies.