At This Point, It Should Make All the Difference

David Limbaugh
|
Posted: May 27, 2016 12:01 AM
Share   Tweet
The opinions expressed by columnists are their own and do not necessarily represent the views of Townhall.com. 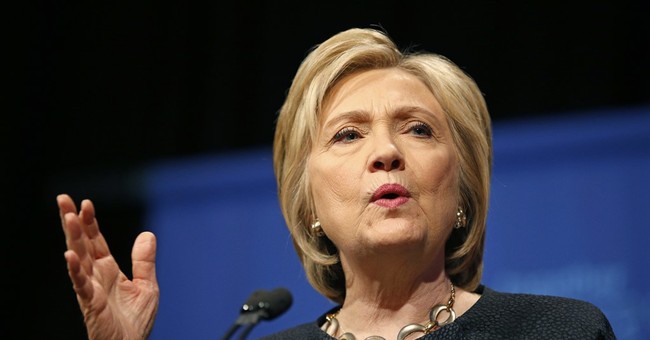 Trending
Hillary Clinton has been groping around for a campaign slogan. She's just unveiled her seventh meaningless catchphrase. How about "Still lying and breaking all the rules"?

That one probably wouldn't help her campaign much -- though with leftist voters these days, you have to wonder -- but it has the virtue of being more accurate than her latest mealy-mouthed rallying cry, "Stronger together" -- as if anyone, anywhere considers her unifying.

It seems the more this campaign moves forward the less popular Clinton is -- even to Democratic voters, as polls show Bernie Sanders now in a statistical tie with her in California. This does not make me sad, but it should scare the pantsuits off Democrats.

There's ample reason for Clinton's unpopularity. She's dishonest, unlikable, corrupt, arrogant and so much more. Can you imagine being so smug from a lifetime of unpunished misconduct that you feel legally immune and politically invincible? But her fate could finally change.

At issue is Clinton's use of her personal email account to conduct official business while secretary of state, a practice she has casually passed off as routine.

The State Department inspector general issued an audit report blistering Clinton for flouting federal records "rules" and cybersecurity guidelines and for refusing to cooperate with the IG's investigation. Though the report acknowledges "longstanding, systemic weaknesses" in the State Department, it singles Clinton out for far more serious violations.

The report says that Clinton's server was "attacked" and that she refused to be interviewed for the audit. It says she never even bothered to seek approval to use her personal account for government work, despite signing and sending a cable June 28, 2011, to all diplomatic and consular posts warning against the security risks involved and ordering them to "avoid conducting official Department business from your personal e-mail accounts." Fox News reports that at one point (March 2009), after Clinton's refusal to use the secure government smartphone supplied to her, a top official sent her a classified memo about her use of the BlackBerry. Damningly, she responded to the official that she understood yet continued to use the device.

The report said there were two other examples of staff members using personal accounts for official state business. One was former Secretary of State Colin Powell, and the other was then-Ambassador to Kenya Scott Gration.

As for the extremely limited personal email activities of Powell, who, unlike Clinton, didn't have a private server for his State Department emails, even NBC's Andrea Mitchell said his actions were "aboveboard" and "not, in fact, violating a rule that was put in place under Clinton."

Concerning Gration, the department initiated disciplinary action against him before he resigned, which, according to the IG report, was how such misconduct was normally handled. By the time Clinton took her position, internal guidance was "considerably more detailed and more sophisticated."

Team Clinton, scrambling to defend Her Highness, is employing the same old tactics used by Team Bill Clinton for many years: Counsel disbelief of your lying eyes; downplay; deny; and then viciously attack your opponents. Clinton campaign spokesman Brian Fallon issued a statement claiming that her practices were not unique and lambasting her political opponents, who "are sure to misrepresent this report for their own partisan purposes."

Though some of the usual partisan Democratic suspects are attempting to dismiss Clinton's practices as "nothing to see here," many of her reliable media allies are not jumping to her defense. Mitchell said Clinton's story "doesn't hold up" and there are "so many inconsistencies." Mika Brzezinski, on MSNBC's "Morning Joe," said: "I really don't want to be the one delivering this, but I got to tell you, this is really hard to believe. It feels like (Clinton's) lying straight out" in saying all along that use of her server was allowed by the State Department. NBC's Chuck Todd opined that the only reason there isn't more "hand-wringing" and "panic" among Democrats over this scandal is Donald Trump's candidacy. He expressed doubt that Clinton could be confirmed if appointed to be attorney general.

The Washington Post editorial board, under the headline "Clinton's inexcusable, willful disregard for the rules," wrote that the IG "justifiably criticized" Clinton's conduct as "an error of judgment," and the board agreed that it was "not a casual oversight," as "Clinton had plenty of warnings to use official government communications methods, so as to make sure that her records were properly preserved and to minimize cybersecurity risks. She ignored them." Further, "there is no excuse for the way Ms. Clinton breezed through all the warnings and notifications," which was "disturbingly unmindful of the rules." The board went on to urge the FBI to expeditiously conclude its investigation "so all information about this troubling episode will be before the voters."

At this point, Democrats had better hope the FBI does its job of purging Hillary Clinton before it's too late, because the party bosses haven't yet shown the courage. She should not be allowed anywhere near the Oval Office again.