David Limbaugh
|
Posted: Mar 01, 2016 12:01 AM
Share   Tweet
The opinions expressed by columnists are their own and do not necessarily represent the views of Townhall.com. 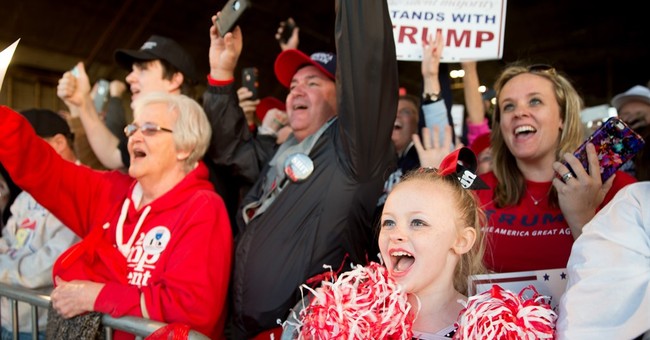 Trending
Just what is the Trump movement all about? I've tried to get to the bottom of it by conversing with various Donald Trump supporters on Twitter.

I have found that most outside the movement are having great difficulty understanding it. It's like nothing we've seen -- at least on the Republican side of the political spectrum.

One perplexed person asked me, "Does it shock you that with all the detrimental information on Trump he is still leading in practically every poll?" My answer: "It doesn't shock me so much as disappoint me."

Let me explore the Trump phenomenon in the form of a dialogue between a hypothetical Trump supporter (TS) and myself. One or two of the responses are from actual Trump supporters, but most are my own words, and I hope they're not offensive to those supporters.

Me: "I'm troubled, because one would think that Republicans would abandon a presidential candidate who has conducted himself as Trump has during this campaign."

TS: "You aren't hearing us. We don't care about political correctness, his manners or your sensitivities. We only care that he will get things done. Wuss!"

Me: "But what about his questionable allegiance to conservatism?"

TS: "You're still not listening. We are not interested in your fancy ideological terms. It's all talk. We want action from an outsider with experience and accomplishments. Action, action, action."

Me: "But what about Ted Cruz? He's admittedly an elected official, but he is still an outsider at heart who's shown he'll fight the establishment. He's actually done it, not just talked about it. And Trump has financially propped up the very people you want to hire him to destroy. So why won't you trust Cruz more than Trump?"

TS: "We already told you. Cruz is a politician and they are all corrupt. In fact, we'd lose our integrity if we even considered supporting him. Even your so-called conservatives have betrayed us by rolling over for Obama's agenda."

Me: "But not Cruz. He fought the establishment and they hate him for it."

Me: "But wait, Cruz has been on the front lines fighting immigration, and, along with a mere handful of others, prevented the Gang of Eight bill from becoming law. He did not steal this idea from Trump. He was defending our sovereignty at the very time Trump was funding those undermining it."

TS: "Cruz is a Canadian. He and his wife are globalists. Goldman Sachs. NAFTA. GATT. CFR. Trilateralists."

Me: "Why would you assign more weight to conspiracy theories than one's actual track record of fighting illegal immigration?"

TS: "Cruz is an establishment liar."

Me: "Oh, boy. Well, I get that Trump supporters are furious at the establishment, but I wonder if a certain percentage of them are just angry in general and hopping aboard the movement because of their discontentment. There seems to be an element of undefined rage involved that accompanies the specific rage over immigration. Is this movement even cohesive?"

Actual Trump Supporter (ATS): "The movement isn't yet cohesive, but there is a powerful element of rage over the largest invasion in human history."

Me: "This brings us back to where we began. If this movement isn't yet cohesive why are its members so enamored with Trump? Why is it their man, right or wrong? Wait, before you answer, I think I've finally had an epiphany. This movement is not just a matter of a cultish following of Donald Trump as many suspect, is it? People were already outraged and Trump just came along, seized the moment and turned it into a wave."

ATS: "Trump isn't the leader. He's merely riding the tiger. If he plays us like the Republicans have for 30 years, he's toast."

Me: "Now we're really on to something. So is this why the supporters are not worried about his alleged dishonesty, his vagueness and vacillation on policy and even his stated willingness to work with insiders?"

TS: "That's right; Trump is very popular among us because he is fearless. He's always on offense, unlike the GOP wimps. But Trump is mainly our vehicle -- a darn good and effective vehicle to be sure, but a vehicle. He's not indispensable. He can always be replaced. This movement is bigger than him. It's about America. Trump, for now, is Captain America, but we the people are America. The sovereignty resides in us. Cruz is a liar. Amnesty Rubio sweats like a pig."

Me: "Speaking of sovereignty, nationalism is the driving force uniting your burgeoning movement, correct?"

TS: "Indeed. As you've suspected, we aren't that concerned, for now, about other issues or the claim that Trump will not satisfy us on those. In fact, we are not necessarily united on those anyway. It's about this nation. We are nationalists. America and Americans first. We must control our borders. That is the key to addressing a number of existential threats facing this nation, and we can worry about the rest of our problems, major and minor, later, once we've returned to the path of securing our borders and saving the nation. When we build the wall and deport millions, we will ensure that all of America doesn't turn into California; we'll better insulate ourselves against Islamist invaders; and we'll help protect our workers from cheap illegal immigrant labor. Another aspect of our sovereignty is that Trump, as the consummate negotiator, will undo the unbalanced trade deals harming our workers. And he'll rebuild the military to protect us against foreign threats. Don't forget. He's a businessman. And Rubio might just be a bigger liar than Cruz."

Me: "I think I understand your concerns, but I ask you again to take a second look at Ted Cruz, for he is not only a safer bet to secure our borders, and restore economic growth, which will enable us to rebuild our military; he is the one person who has shown that, notwithstanding the conspiracy theories, he cannot be bought and he can always be relied on to do those things he promises. There is no reason to take a risk on the volatile Trump, who, in the process of implementing your desired solutions, may expand federal power and implement leftist policies. He's been liberal more than conservative throughout his life, and we have no evidence of any dramatic conversion. As suspicious as you all are, you should be very suspicious here. You might think you'll be in charge, but that's not a realistic expectation. Finally, we must never omit liberty from the equation. Ted Cruz will do most of the things you want done, but he'll unquestionably honor the Constitution and rule of law, which Trump rarely mentions, reduce government and safeguard that which has always made America unique: her liberty. Please give it just a little more thought and consider this. I do believe Ted Cruz shares your concerns about the establishment and understands the condescension of the ruling class. He's dealt with it firsthand. He'll be your reliable advocate."