GOP, Let Obama Shut It Down and Own It 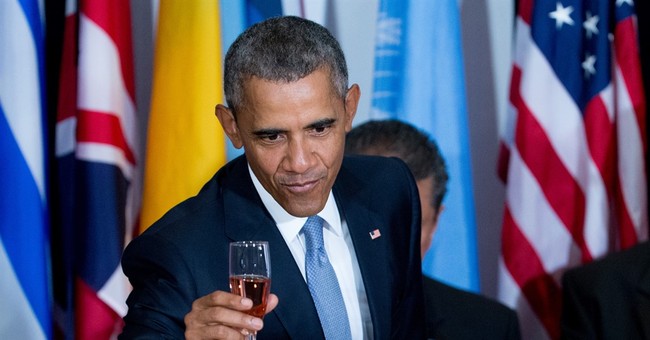 Trending
Establishment Republicans inside and outside Washington miss the grassroots' point. Even if we don't eventually prevail with defunding Planned Parenthood, we need to take this issue to the American people.

Establishment types believe that just as we are finally poised to recapture the White House, crazy tea party extremists are about to mess everything up because voters would blame and punish the GOP in 2016 for a shutdown.

They've cried wolf so long that conservatives no longer believe them. The conservatives aren't idiots. They knew when they elected these majorities that they would have great difficulty advancing the conservative agenda with President Obama in office. But they didn't expect them not to even try.

Yet the Republican leadership doesn't put up a fight, and establishment pundits go along with this surrendering. These are the same people who are apoplectic over the rise of Donald Trump. They can't understand how conservatives would support a man they believe is not conservative.

But what have their establishment darlings done to promote conservatism? Many Trump supporters believe that Trump gets it and will fight for them. They know the establishment won't.

The Trump phenomenon aside, I can't understand the establishment's resignation in assuming Republicans would automatically lose the PR battle over any federal government shutdown.

These folks said we'd lose the congressional elections if Ted Cruz fought for a shutdown over defunding Obamacare, but a year later, Republicans won stunning congressional victories. The establishment predictably responded that we won precisely because time had passed and people had moved on to other issues.

Nonsense. Establishment types knew at the time they issued their doomsday warnings that the elections were a year off, and they were still paralyzed with fear.

It is disheartening that they always pre-emptively cave before the fight begins. Why are they always so sure voters will blame Republicans for any shutdown no matter what issue is involved? Why do they say Obama will be viewed as the victim -- no matter how heinous his positions, no matter how unpopular those positions are with the American people and no matter his approval ratings at the time?

Of course Republicans will lose if they aren't united, if their establishment wing battles conservatives opposing Obama instead of Obama himself.

If ever there has been an issue worth fighting for and one that resonates with the people, it is the federal funding of Planned Parenthood, a thoroughly corrupt and evil enterprise.

So what if abortion procedures make up a relatively small percentage of the services it provides? Serial killers probably behave the majority of the time when they aren't murdering people. This organization is on a mission to maximize the number of abortions performed, and there is just no way to spin that evil into a virtue.

Surely, you've heard the horror stories of Planned Parenthood's not fully informing mothers of the potential emotional and psychological damage they'll suffer from abortion. There are also reports of women who changed their mind about getting an abortion but were forced to proceed anyway.

Undeniably, Planned Parenthood is an abortion factory that is swimming in blood money. Whatever other services it provides for women can be done by thousands of benign organizations untainted by the death of innocents.

Republicans must call Obama's bluff. As we all know, government shutdowns are not catastrophic, as essential services continue. And when they occur, the GOP doesn't have to accept the media spin that Republicans caused them.

Republicans should view this shutdown not with trepidation but as an opportunity to showcase Obama's obsession to fund a dark entity that kills babies and harvests their organs. Aren't they skilled enough to deflect Obama's propaganda that this as a war on women and accurately portray it as a noble struggle to save babies instead of rewarding those trafficking in their deaths?

If Republicans lack confidence to articulate such a clear-cut moral issue, how will they dare to roll back Obama's agenda if they win back the White House?

It is time to draw the line and take our case to the people. If we lose this battle, we will be in a better -- not worse -- position to win in 2016 because the Republican base will be energized in a way it hasn't been since the Reagan '80s. Don't underestimate that force.